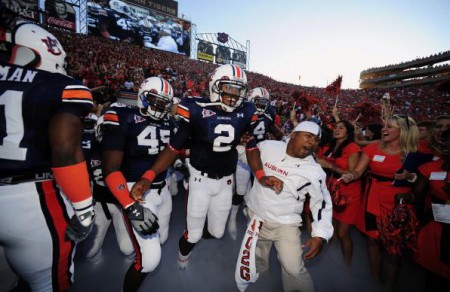 It’s not just the fans, you know, who have designs on nine or ten wins and an Iron Bowl to decide the SEC West. Josh Bynes came right out and said “eight ain’t it.” There’s been talk of championships. Trooper Taylor’s had “G2G” emblazoned on his towel–you can see it in the pic above–for what’s apparently a team motto: good to great. This is all as it should be.

But those ambitions are also why last night’s performance remains a small disappointment, even after sleeping on it. Maybe it shouldn’t be, not when the only real question we had about the offense–“Is Cam Newton that good?”–was answered with a Yes so resounding I’d imagine everyone in the SEC could hear it. Whatever else you might say about Auburn after last night, you have to acknowledge that with Newton at the helm of an offense this experienced, this explosive, and this well-balanced, they can beat anyone on the schedule.

But there’s a lot of good teams that can say that. Great teams will beat anyone, or at least all but one or two anyones. And on the basis of last night, Auburn’s not there yet.

Some of that is the defense. To be fair, a short, underneath passing game may just be the rock to the scissors of Ted Roof’s schemes; most of what Arkansas St. ran last night was the same stuff Northwestern ran in the Outback Bowl, with of course much of the same results through the first half. I also feel a little bit hypocritical griping about Roof when this is more-or-less what his resume’ promised when he signed up: terrific run defense (and whoever you’re playing, 43 yards allowed on 35 rushing attempts is pretty damn good), spotty-to-cruddy pass defense. But it’s just too cruddy at the moment to be satisfied, or at least it was during the first half. Not one Auburn fan who watched last night’s performance didn’t say this, but that’s because it’s true: that kind of performance will get us killed against SEC competition.

But it’s not just the defense, not even mostly. It’s mostly

— Terrell Zachery wiping out a first down by somehow screwing up his “rub” route so badly he manages to get called for a pick, which never, ever, ever happens

— Etheridge missing a one-on-one tackle on a lumbering Arkansas St. back at, what, the 4

— Five first-half penalties, one of which was a Mike Berry false start

Those things have nothing to do with scheme, or talent, or even preparation. They’re simply a matter of execution, of mental consistency, of–for lack of a better word–discipline. Auburn was not a disciplined team last night. And an undisciplined team is not going to be the Auburn team we want them to be. It sounds horrendously cliched, but again, it’s the truth: unless they start doing the little things, the big things are goign to be beyond their reach.

The good news is that the Auburn we saw this week is hardly guaranteed to be the Auburn we see next week. The defense kind of has to improve, at least a little, and getting Savage’s and Etheridge’s first game back out of the way should pay dividends. First game or not, that the opponent was Arkansas St. (and that the Red Wolves’ defense showed pretty quickly they weren’t going to stand a chance against Auburn’s offense) couldn’t have helped Auburn’s overall focus. And both Malzahn and Roof probably blooded a few more new players than they would have against a stronger opponent.

So it’s far, far, far too early to write Auburn off as the same “good” Auburn we got last year. But on the basis of last night, the offseason hasn’t gotten them to “great” just yet. There’s still too many little things to fix.

— No matter the opponent, totaling 608 offensive yards, averaging 9.4 yards per play, rushing for 367 yards, and throwing for 15.1 yards an attempt is pretty damn impressive … particularly since I, for one, got the sense that Malzahn didn’t push the offense to its limits in terms of either tempo or scheme. Aside from the penalties and the lone turnover, there’s not really anything to complain about with the offense. Pick nits if you want, but worrying now is worrying for worrying’s sake.

What’s interesting, though, is that we expected Adams and Zachery, Fannin and McCalebb, and the line to carry Cam Newton to competence in his first start. What happened was more that Newton’s incredible gifts (and ability to run the ball) carried the rest of the offense; Adams and T-Zac combined for three receptions, Fannin was a nonentity at tailback, and the line had a handful of surprising breakdowns.

— About tailback: I was a little harsh on Fannin last night. He got popped, the ball came out, sometimes it happens. Twice is a trend, but once might be a fluke, and Fannin didn’t have any major problems last year. Assuming he doesn’t put the ball on the ground again, I’d like to see him get more than three carries next week. There’s too much potential there to ignore; there always has been.

— Ladies and gentlemen, we have both a punt returner (9.4 yards per return!) and a viable third receiver. Quindarius Carr, welcome to mattering.

— As for the rest of the special teams … eh. 37 yards per net punt is all right, but not great. Kickoff return (21 per attempt) wasn’t as explosive as we expected and Washington fumbled. Thanks in large part to Craig Sanders’ marauding runs downfield, kickoff coverage looked much better statistically (18.4 a return) that last year, but that included a couple of squibs, and Cody Parkey didn’t seem noticeably better than Byrum. OVerall: good enough, I guess. But nothing difference-making aside from the FG block and Byrum’s usual reliability.

— Dude, when did Antoine Carter get 2.5 sacks?!? I was going to gripe about how we had to rely on our tackles for a pass rush–those of you who thought I was too harsh on Michael Goggans in the A-U Pre-view, please note that he totaled all of one assisted tackle last night–but I guess this is why you need box scores and rewatches to really know what was going on.

Auburn will have to be better defensively against Mississippi St. to win that game. We know this. But there’s no reason to think they won’t be better; no more jitters, no more safeties returning for the first time from devastating injury, more rushes and fewer quick outs. And the offense should continue to be a terror. The time to panic is later, if at all.