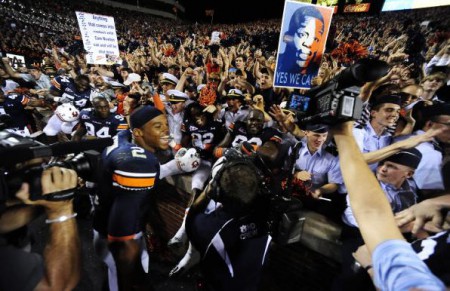 For college football teams themselves, expectations are a positive. Maybe even a necessity. When you need to find the motivation to power through a Kevin Yoxall workout in the dead middle of summer, I have to think “conference championship” is a much more effective carrot to chase than “win over Arkansas St.”

But for the college football fans, though, I’m not sure expectations do a damn thing for us. We can’t help but have them, of course, but we also can’t help ratcheting them up to the highest level we possibly can while still holding on to some shred of rationality. (Some of us, of course, prefer to let go of that shred and demand domination at every step and annual trips to Atlanta. But I think that’s outside the purview of this conversation.) Your humble Auburn Blogger isn’t even close to being an exception; I try to be as calm and as sensible about our team as I can be, but I’m still the guy who predicted a BCS berth in 2006, 10 wins in 2007, a West title in 2008, and another 10 wins before this year.

So we live in a near-constant state of disappointment with our football team, and on those rare occasions when they actually exceed our expectations–as Auburn did in the five games to begin 2009–our response isn’t to be thankful for those performances and wait patiently for the other shoe to drop, it’s to immediately readjust our expectations to make those performances the new baseline … and then scream bloody murder when the team doesn’t measure up to it.

Which brings us to last night, when beating Clemson in that fashion should have had us all delirious. Sure, Auburn had just about as miserable a first 29 minutes as it’s possible to have. But the last 31 minutes included a sudden, intriguing resuscitation job on the final drive of the first half; a series of darts from our pivotal, struggling quarterback, any two or three of which would be his best pass of the season; the emergence of a pair of tailbacks and the resurgence of our offensive line to offer up a running game again; five stops out of six for a defense that spent most of the first half getting pushed around when they weren’t getting the heads spun, the last couple seeming to hang by a thread and arrive by pure will; that towering, amazing moonshot of a pass from Newton to Zachery, the sort of thing you want to frame from Newton’s poise in the face of the rush to the arc of the ball to Zachery’s tightrope job–I still don’t know how he did it–to the slow cruise into the end zone; and finally, overtime, where Wes Byrum stayed Wes Byrum, the defense got one final desperate stop (how many of you gasped when it looked like Ellington was going to break free to the end zone?) with the help of Parker’s one true missed throw of the night, and Auburn got one, final, decisive break. This was an epic game, a fierce and brutal contest against a team every bit Auburn’s athletic equal, and Auburn won. Like the West Virginia game last year, this is one where I wish I could have been in the stands even more than usual. There was probably some delirium there.

I tried to find some on my couch. No question, I was happy. Very, very happy. Auburn won, against a quality team. There’s enough dopamine in that sentence alone to keep me on a cloud for a few days.

Because of expectations. I want Auburn’s offense to blow teams off the field the way they did to start 2009 and the way I believed they would again this season. And they haven’t done that. I want to win home games, even ones against good competition, without having to rely on our opponent’s mistakes and overtime. Nope. I want Auburn to look like the team I imagined in August, just once, so I know that team is in there somewhere. So I know the “good offense, good defense” corner of the Punnett square we discussed last week is still a possibility. Maybe it still is. But we haven’t seen it yet.

So I’m giving up my expectations, or at least doing the best I can to give them up. Maybe this is a 10-win West challenger Gene Chizik has on his hands, and maybe it’s not. Maybe they’re going to take the league by storm from this point on, and maybe they’re not. Whatever happens, though, it’s time to live and die with what happens on the field and nothing else. Winning is good, losing is bad. The end. A week at a time, just like the cliche tells us.

— A large part of the above is written because, dude, Clemson is a good team. Athletes everywhere. Bowers and Ellington are monsters. McDaniel’s damn good too. Most impressively–and most surprisingly, given how little I respected Dabo when he got hired–Clemson’s a well-coached team. They knew their receivers were crap. So when they had long yardage to pick up, they just ran delays, draws, screens, and even wheels, over and over again, until Auburn stopped them (which, unfortunately, they never did). On the other side of the ball, there’s a reason Kevin Steele’s been around forever. The mistakes on that side were minimal.

More than a few comments both coming into and coming away from the game dismissed Clemson as “just an ACC team” … but talent-wise, coaching-wise, I think that team would do just fine in the SEC. (Do you see a lot of difference in that team and the LSU team that’ coming in a few weeks? I don’t.)

They’re also much better than West Virginia was last year, if I’m any judge. Auburn beat the Mountaineers fair and square, but they needed an awful lot of help from the ‘Eers to do it, no question about it. Clemson, on the other hand, gave Auburn virtually no help at all in regulation. Auburn had to come back on their own. That they did it speaks volumes about the improvement they’ve made from last year to this year.

— Yes, they’ve improved, dramatically, and arguing otherwise is just wrong-headed, if you ask me. Think about it: when Auburn had the kind of offensive half they had in the first half last night, what odds would you have given the defense being stout enough to keep the game within reach? Cruddy, cruddy odds, I’m thinking. (Hell, what was the difference between the Arkansas game last year and last night, if not for the size of the gap being 17 points instead of 28 when the offense finally got its head on straight?)

Beyond that, aside from the Arkansas game, last year Auburn had to start out the game moving the ball … because they only got shakier as games progressed. To recover from that train wreck of a half to still put up 400-plus yards is a heck of a display of adjusting from the coaches and  mental fortitude from the players.

— Well, we wanted an explosive offense, we’ve got an explosive offense–Auburn averaged an even 7 yards a play last night (after those first few possessions, no, I don’t know how), more than they managed against any BCS competition after Week 2 last year.

Newton going for 203 yards on only 14 attempts (14.5 per attempt, 29 yards per completion) had a lot to do with that, but the key for the offense is what I think Chizik highlighted at halftime–they have to get the tailbacks involved and productive. I don’t know what McCalebb and Dyer averaged after the break, but for them to finish with 162 yards on 26 carries–6.2 yards a pop–they must have just been running rampant.

So the problem, I don’t think, is the offense; it’s just getting the offense to execute consistently.

— Third-down conversions would go a long way towards that goal, obviously; Auburn finished 5-of-13 and missed three different 3rd-and-2’s in the first half alone. (They would finish 3-for-7 on 3rd-and-4 -or-fewer.) Not good enough.

But cutting out negative plays would help even more; 9 penalties for 90 yards (including that bushel of holding flags) is still way too many, and Clemson finished with seven TFLs and 2 sacks. That’s too much backwards movement to expect consistent forward movement. (On the plus side, the broadcast mentioned that Clemson was one of the national leaders in negative plays last year, so maybe things will perk up next week.)

— 81 more snaps for the defense. We’d getter get a big lead and get it in a hurry against UL-Monroe in two weeks, because those guys are going to have to take a few breaks here and there.

— Josh Bynes: 11 tackles, 2 for loss, and a pass breakup. Nick Fairley: 7 tackles (as a DT!), 3 for loss, and a sack. If those guys can keep playing like that, and Stevens can get back up to full speed–he wasn’t himself last night–the defense isn’t going to go anywhere.

— Did anyone else feel bad for the Iowa and Arizona fans? First the game goes into overtime after both teams drive into opposing territory and don’t score in the fourth, then there’s an injury that stretches out OT even longer. (On the plus side, it would have been real easy to go into a second OT.)

For all the missteps and useless flags and interceptions and runs to nowhere, Auburn is one win away from going to Lexington 5-0. And even more importantly, we have a defense that’s going to keep us even in the games where the offense sputters.

I’ll take that. Would I rather have easy W’s and an offense I felt like I could trust to put 28 points on the board every time out? Yes. But, hey, Auburn’s survived. We’re past the point of expectations now. Just win, baby.