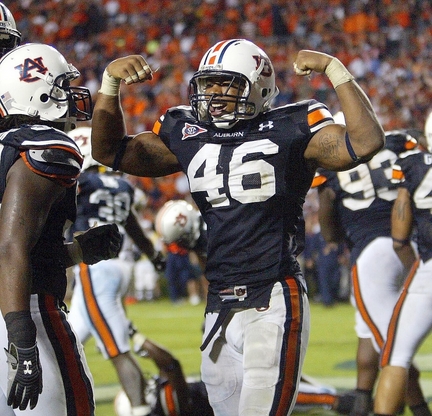 So, the HOT RUMOR flying around the Auburn Interwebs today: Craig Stevens has been suspended for the Arkansas State game, and possibly longer. We don’t usually comment on HOT RUMORS just for the sake of commenting on them, as this can lead to unnecessary and inaccurate flame-fanning, and if we didn’t have something to add you wouldn’t be reading this.

But in this case, we do. I’ve got what I believe to be a reliable source on the matter. And what he or she is saying is that, yes, Stevens is suspended. He will not play tomorrow.

So: I would advise against freaking out. There’s no reason to necessarily think Stevens is going to miss more than this week, and Auburn should, obviously, be just fine with Jon Evans against Arkansas Freaking State. If the suspension lasts any longer, that would be an issue, but we’ll talk about that if/when it happens. And there remains the possibility we have heard wrong and this will come to nothing.

In the end, then, this isn’t a big deal (for now). And compared to several of our SEC brethren, if this is the worst disciplinary thing that’s happened to us this offseason–and it is–we’ll still be getting off easy.

But we thought it was important enough for you to hear what we’ve heard. And now you have.