*Cue whistling.* OK, so the Tweeted headlines you may have read about the grand opening of the Auburn Arena aren’t entirely accurate, because Auburn’s basketball teams will be very much in attendance and on display …

The grand opening of Auburn Arena is scheduled for Friday, Oct. 15, at 7 p.m. CT.

The Auburn Athletics Department will celebrate the official opening of the $86 million Auburn Arena with a basketball celebration highlighting the men’s and women’s basketball teams.

This will be the first opportunity for fans to see new Head Coach Tony Barbee and the men’s basketball team in action as Oct. 15 marks the first day teams can officially conduct practice in preparation for the 2010-11 season …

The Auburn women’s basketball team is also preparing to open its official practice season in the new arena with a team that returns all but one player from the 2010 squad. Coach Nell Fortner, the 2009 Southeastern Conference Coach of the Year, said the grand opening of the arena is a great day for Auburn basketball in what will be an exciting year that culminates with Auburn hosting the First and Second rounds of the NCAA Tournament.

… but, yes, the “grand opening” will also include a performance from the Harlem Globetrotters.

Which, look, that’s great, the Globetrotters are awesome in their Globetrotteresque way and the kiddos will get a kick out of ’em. But I don’t think I’m alone in thinking the Auburn Arena’s “grand opening” needed to be something Auburn-exclusive, am I? Either make the grand opening the first night of the season or, if we’re going the “come watch Auburn practice!” route, jazz it up with something: midnight madness, a slam dunk/three-point contest, whatever. The Globetrotters are fun, sure, but my gut reaction is that the grand opening of the building we hope will revitalize Auburn basketball shouldn’t be quite so … Sideshow Bob, if you get my drift.

Wins are awesome. Because then the team feels good enough to do this:

Pugh and Ziemba belting it out kills me. They’re not gonna win ’em all, these Tigers, but damn it, I wish they could. (HT: like, eight different people on Twitter.) 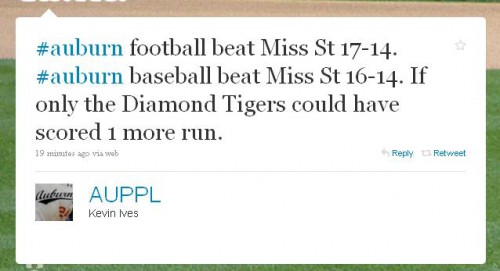 The impossible dream. Look who checks in at No. 5 on SI.com’s Heisman Watch this week. Ryan Shoemaker! (Just kidding. It’s Byron Isom.)

Hmmm. Food for thought from Braves and Birds on why it’s better to have a hands-on rather than CEO head coach:

Let’s say that Michigan and Auburn both go 8-4 this year with effective offenses covering for mediocre defenses. Which team is better off for the future: the team with an offensive head coach whose fans know that they will always have good offenses as long as they have the head coach in place or the team with a defensive head coach who is apparently dependent on an offensive coordinator who will likely get his own head coaching gig in the near future? In short, it’s better for a team to be winning because of success in the head coach’s strong suit. That’s why the first two games have been especially encouraging for Michigan.

My first response is just Nuh-uh, but I’m not sure if I really have a second one. (Well, other than that I think Auburn’s still likely to do better than 8-4, but that’s not Michael’s point anyway.) This is why the Miss. St. game remains at least semi-encouraging: as I’ve written before, we need to see defensive improvement this season not just for the sake of this team, but so we know the team won’t be entirely dependent on Chizik having to make the perfect call hiring call at OC if/when Malzahn departs in the year 2019 or so.

WBElsewhere. My weekly al.com roundtable response is up and running, and with a new personal record for comments, including my first actual al.com troll! He even said reading me felt like reading “a Junior College student newspaper article”! I’m so proud, you guys. Finally. I’m still not exactly in comment king Kenny Smith’s ballpark just yet, but it’s a start.

I’m lucky enough to have the chance to extend my love for all things mid-major to the gridiron, having adopted the weekly Mid-Major Monday column at Dr. Saturday. If you’ve ever wondered how I’d rank the top 10 teams in mid-majordom, now’s your chance to find out.

I also made a relatively brief appearance on the Oxford-based SportsTalk with Richard Cross yesterday; I should be the second guest in the recording here. Busy busy.

BlAUgosphere. Section 25 made the trip to Starkville and reports back, but their real genius comes in asking if you can spot the Auburn player here: 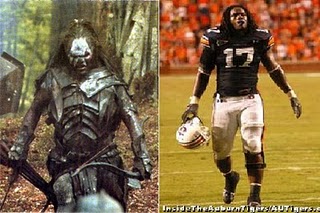 More State reax: Acid at Track ‘Em, Rob Pate, and our own Ben Bartley over at his homepage. I think this may be a slight exaggeration of Dr. Gustav’s potential …

The offense lacks proper Gus Malzahn Tempo. Too often Auburn came to the line late, making adjustments, looking confused. Not sure if that’s Newton or line and receiver alignment.

Gus Malzahn can give us space travel. There is no try.

Here at TWER: last week might have been a record, in terms of posts posted: I have it at 36… in five days… one of which was a national holiday. I bragged in some podcast thing from last month that this fall would feature wall-to-wall content, and apparently I wasn’t lying. Justin scored some high fives and ruffled a few feathers in his critique of Auburn’s pre-game theatrics (mostly related to the song choice for the tunnel entrance video). At least some of the strange-for-a-Mississippi-State-game anxiety you felt Thursday afternoon game can be traced to John Magruder’s sage contention that an Auburn win might depend on the “chaotic fire” of Ted Roof, as well as to our relentless milking of the 24-hour Starkville coffee shop marquee controversy. Hopefully it was soothed by Newton’s Three Laws of Motion and the sweet, sweet pep of Smillin’ Jack Smollon. And frum the gipht that keps on giveng.

Etc. Chris Low tells you things about Cam Newton you already knew … If you haven’t seen this future Pulitzer Prize-winning photo of Jeremiah Masoli, see it now … the Auburn volleyball teams went 2-1 and won the College of Charleston tournament over the weekend, with libero Liz Crouch named the SEC’s Defensive Player of the Week for her efforts–lot of that going around, huh?