For the ex-pats. If you’re one of the many who couldn’t attend last Saturday night’s matchup, courtesy of Jeremy, here’s what you missed in terms of program coverage: 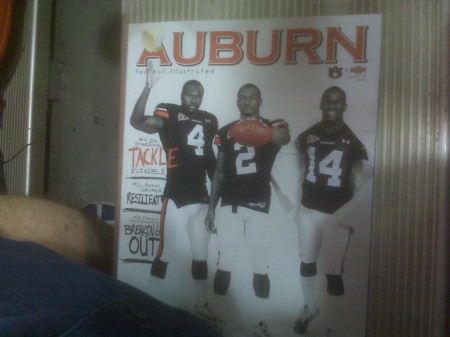 Yes, that’s Zac Etheridge discarding his neck brace over his shoulder, and yes, that detail makes this one of the more awesome covers the program has featured in recent years.

So it’s a shame that more people weren’t in the stadium on Saturday to pick one up. I know I’m not really in position to scold other Auburn fans for not showing up–so I won’t–but when your announced opening-week attendance (for the program’s unquestionably most exciting team in four years) is some 3,000 fans below capacity and the swaths of empty seats in the upper deck suggest the actual attendance is another couple thousand below that, the idea of stadium expansion shouldn’t even be a matter for debate. I fully support any available funds to make Jordan-Hare nicer. But now not the time to worry about making it bigger.

Expectationswatch. Auburn might be Auburn and inching their way up the polls, Mississippi St. might be Mississippi St. and only appearing in the “Also Receiving Votes” section. But Thursday night in Starkville-plus-Auburn’s shaky defensive outing-times-State’s bludgeoning of Memphis still equals “tossup” or even “upset” in the minds of those who have commented on the game. ESPN’s Pat Forde has picked the Bulldogs. So has T. Kyle King. Vegas has Auburn currently installed as only a two-point favorite …  meaning that thoug hthey see Auburn as the better team, this game is more-or-less a coinflip.

I would love nothing more than to scream YOU MISGUIDED BUFFOONS at the top of my bloggin’ lungs, but of course since I can’t even think about this game for longer than a few seconds without feeling like I could lose my lunch, I can’t really blame anyone for taking the Bulldogs. I’m of the same opinion Andy Staples offers in his weekly power rankings (where Auburn ranks 22nd):

The gap between the haves and the have-nots in the SEC West is paper thin. If Auburn can escape Starkville with a win of any kind, the Tigers should be ecstatic.

Co-sign 100 percent. The good news here? If this many people in the media are this worried about Auburn’s chances in this game, and as many Auburn fans are somewhat worried as I think they are, the likelier it is Auburn’s players themselves also understand how ridiculously dangerous this game is.

Debate. I heartily recommend Jay Tate’s weekly liveblog of the Chiznick’s weekly “Tiger Talk” radio show, not because Chizik offers up much in the way of new information, but mostly for the enjoyable snark and reminders (again, for us ex-pats) that small Alabama towns like Wedowee and Monroeville are still out there, plugging along. Anyways, you do get the occasional interesting response from Chizik, like this one on the cowbell dilemma:

I’ve never been to Starkville, so on one hand, when a reporter like Tate and a coach like Chizik who have say they’re not a big deal, I’m inclined to believe them. On the other, I think the atmosphere at Davis-Wade is going to go above and beyond what you’d usually see at MSU’s place. Exhibit A:

If it’s at all possible for Starkville to get disruptively loud, that’s how loud it’s going to be tomorrow night. (Video HT: @AUBlog.)

“No comparison, and that’s just the honest truth,” Evans said.

WBElsewhere. My entry in this week’s al.com Blogger Roundtable is available here; topics covered include Newton’s divinity, the zone read, and the troubles of the SEC’s week 1 flops. The rest of the roundtable entries live here, with Kenny Smith’s response obviously recommended.

Other Sports Still Exist. John Pawlowski signed a contract extension today, which is good news. The 2011 baseball schedule is out; Kevin at PPL tells you what you need to know. Junior Katy Frierson is your national women’s soccer player of the week after scoring an overtime game-winner to beat No. 5 Florida State; Auburn is now ranked No. 21 themselves. The volleyball team swept Troy 3-0 to improve to 7-2 on their young season.

BlAUgosphere. Acid’s postgame report card is always worth a read; Rob Pate offers an MSU preview at Eyes on Auburn (he’s more confident than I am, I’m afraid); WarBlogle collects this year’s intro videos in one post, all of them, and has a guest poster relive Auburn’s 1970 beatdown of the Bulldogs. And as always, if you haven’t clicked around the TWER homepage the past couple of days, you’re missing a ton of fantastic stuff.

Etc. Auburn played more freshmen in its season-opener than anyone in the SEC save Florida (15) and Tennessee (12, same as Auburn). I’d say those depth problems aren’t exactly solved just yet.