Before crunching the Predict-O-Nomics on another slate of SEC games, new TWER contributor Mac Mirable shares some tricks of the trade that should have numbers geeks — and gambling addicts — foaming at the mouse.

For those of us constantly obsessing over how well Auburn would stack up against the rest of the SEC, I’ve created a handy table – the Vegas Lines matrix – to help us obsess even more. (Click to enlarge.)

Using 70 different predictive variables, I have modeled the Vegas Line and used that model to predict the Vegas line for every possible SEC match-up.  Getting a good estimate of the Vegas line is easier than predicting the actual margin of victory, but it’s still no picnic.   The majority (67%) of the odds predicted so far this season have been within a touchdown of the actual odds offered in Vegas.  The odds predicted above will get closer and closer to what Vegas actually offers each week, as onference games make up an increasingly large portion of each team’s year-to-date statistics.  As you might imagine, it’s difficult to predict the odds Vegas will place on the Iron Bowl when Alabama and Auburn are only a third of the way through their schedules.

WHY YOU SHOULD CARE

Well, the Vegas lines are interesting in their own right and looking at how they change week after week, we can begin to get an empirical sense of how much better (or worse) Auburn is trending relative to their opponents.  If that’s not enough for you, we can use these odds to get the implied probability of winning in these match-ups.  These probabilities are calculated using thousands of prior games.  For example, in the past 10 years (the period my data covers) there have been 212 games where the home team was favored by exactly 7 points.  In these 212 games, the home team won 142, and lost 70, for an implied win probability of 67 percent.

By populating the above matrix with these probabilities, we can “simulate” the remainder of the season, and calculate such things as a team’s expected record or probability of going undefeated.

The above table (click to enlarge) reveals that Vegas likely thinks no one has a great shot at beating Alabama at home this year.  Florida has an 18 percent chance of doing it, and Auburn has a fourteen percent chance of doing it.  School spirit aide, if Alabama is going to lose, it’s going to have to come on the road.   Of Alabama’s remaining 8 games, we’d forecast they should win 7 of them on average (with their being some small chance of their losing any of them – which adds up to their losing a total of one game).  At this point in the season, they have a 22.4% chance of going undefeated.

We can also look at how Auburn’s future games should unfold.  With the exception of the Iron Bowl, we should be favored in every game – except when LSU comes to town.  I’m not convinced that will play out of course, but the remainder of our schedule is very favorable. Auburn should win 6 of its remaining 8 games and has a 1.9 percent chance of going undefeated. (Click to enlarge.) 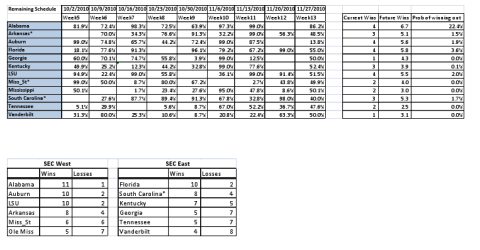