A week or so back, while lamenting the news of Ben Tate’s season-ending ankle injury, Thor told how burning a Florida shirt (taken forcibly off the torso of a “friend”) in 2000 might be responsible for our 3-1 post-burning record against the Gators.

He also suggested that a similar sacrifice might exorcise the demons responsible for the recent curse (Ben Tate, Kenny Irons, Ronnie, Cadillac, Heath Evans) hanging over former Auburn running backs in relation to their NFL careers.

And he was serious.

The idea is to buy this shirt: 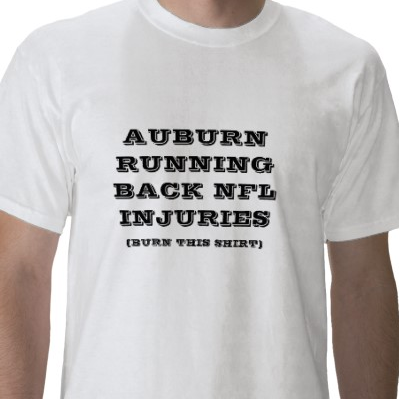 and then (per it’s instructions) to burn it.

Thor will have the altar prepared well in advance at his tailgate spot (located on the concourse, between Haley Center and the new student union) on Saturday. The ceremony will last from 3 p.m. to 3:30 p.m.

Even if you don’t want to buy a shirt (Thor has one, but obviously where two or more shirts are burned in Auburn’s name…), your physical presence and spiritual support will be greatly appreciated. We are even trying to secure for burning the very sock Ben Tate was wearing in Houston’s pre-season opener, in order to send it up in smoke just like it sent his rookie season. This is serious business, people. We are under no illusions.

So, if you haven’t already, feel free to join the Facebook group. And be there, if you can… the lifestyle to which our boys want to grow accustomed depends on it.