A week-by-week preview of Auburn’s 2010 opponents. But since you can find straightforward overviews in a half-dozen magazines and a ton of places across the web, these are a little more … disposable. Light. Cheese-puffy. Previously: Arkansas St., Mississippi St., Clemson, South Carolina, UL-Monroe, Kentucky, Arkansas, LSU, Ole Miss.

Presenting: Georgia! (I was going to do a strait-laced Chattanooga preview in which they were taken all-caps SERIOUSLY, and it would have been funny. But we’re three days from kickoff. No time. Sorry.) 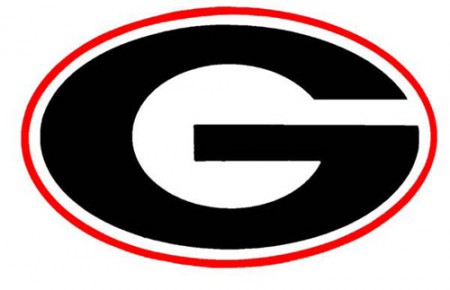 What their logo tells us about their football team: Man, so familiar. Classy. Steady. Reliable. Un-flashy. The sort of football team that wound up marrying not the head cheerleader, but, like, the cheerleader fifth-in-command, the one you could actually talk to, the one that didn’t mind dirtying her nails helping her Mom in the yard on a Sunday afternoon, that took an interest in football because she liked it and not because her boyfriend did. Someone like, I dunno, this person.

They’d be a cool football team to hang out with. Good people, and all. But a lot of times I look at what a slapdash, haphazard, crazy struggle it’s been for the rest of us … and goshamighty holy hell, do I ever hate football teams like that.

What happened for them last year: It’s not often the team that scores more than all other SEC teams in SEC play (save the one they tied with) goes 4-4 in conference, but thanks to the Dawgs’ staggering -16 turnover margin–third-worst in D-I–and another vintage Willie Martinez defense, the Dawgs managed. (Of course, Arkansas managed an even more impressive 3-5 mark, as did No. 5 offense Auburn. That three teams that good offensively still went a combined 10-14 in conference should tell you that 2009 was not a memorable year for SEC defenses.) Toss in a season-opening road loss to Oklahoma St., and the Dawgs wrapped up at 8-5. Mark Richt isn’t really on the hot seat yet, of course, but after two straight disappointments, I do have to recommend he start the ball rolling in the opposite direction this season.

What happened the last time these teams met: Auburn scored touchdowns on each of their first two possessions to go up 14-0, added another touchdown before halftime, saw McCalebb mysteriously recover from his ankle injury to break loose for another huge third-quarter score, intercepted Joe Cox twice on the same play, held Washaun Ealey to 2 yards rushing on 27 attempts, had Byrum kick a 72-yarder just for kicks, had a visiting art critic radio down to Malzahn that he was “moved to tears” by the finest work he’d seen in years, received a congratulatory call from the President in the middle of the fourth quarter when he said he “just couldn’t wait ’til the game ended,” Auburn had been so impressive, and when the final whistle blew on a 237-4 victory, the heavens opened up and cherubim descended to place laurels across the brows of the Tiger players as God’s thunderous voice boomed “BEHOLD: THE PROOF YOU HAVE BEEN SEEKING.”

What actually happened: A loss. Fourth year in a row.

What two things about the Bulldogs are causes for alarm:

1. The turnover thing. If you’ve read me for any length of time you know I believe, and I believe strongly, that–like a team’s record in close games–huge turnover margins one way tend to swing wildly the other way the following season. As I noted previously:

Last year, Georgia did things like outgain Kentucky 487-260 and still lose by turning the ball over four times in a half. This year, at some point, the Dawgs are going to be badly outplayed and win anyway, because that’s the way these things work … and doesn’t it seem like that would be the sort of stupid thing that might happen for a road team in the Deep South’s Oldest Rivalry?

2. The last time Richt was having to put up with this “hot seat” nonsense, it was mid-2007, after his Dawgs had been humiliated by a so-so looking bunch of Volunteers and come out “angry” the next week to barely scrap by Vanderbilt.

All that happened after that was a bludgeoning of Florida, a rout of Auburn, the famous obliteration of Hawaii in New Orleans, and a No. 2 final ranking.

As the saying goes, I don’t think we’d like the Dawgs when they’re angry. About, you know, last year, and preseason expectations and the “hot seat” and all.

What two things about the Bulldogs are causes for confidence:

1. The last time Georgia won even four in a row in this series before last year: 1948.

OK, so that also happened to be the last time Georgia won five in a row–that was No. 5, with a tie to break the streak the following year–but you get the point: this has not been the kind of rivalry to see the huge swings in dominance we’ve gotten from the Iron Bowl. (Auburn’s longest streak since ’58 is also at only four games.) Saying Auburn is “due” to beat Georgia just because we haven’t done it for a while doesn’t have any basis in actual football or maybe even reality …

… but I still think Auburn is due to beat Georgia. (Besides, two years running the teams have been pretty much even and Auburn’s just crapped out on fourth down in Georgia territory on the final drive of the game. Eventually, we’re going to score on one of those drives.)

2. The turnover thing is clearly in Georgia’s favor, and the officials probably owe them a big call somewhere after the A.J. Green fiasco, but it’s not like the Dawgs didn’t catch a few breaks themselves; they finished at a total yardage margin or -21 yards per-SEC game (Auburn was at +6.9, for reference) and won two more close games that they lost, including a home date with South Carolina where the box score was nearly as weighted against them as the UK box score was for them.

The point: despite the turnovers, Georgia wasn’t a lot better than its record in 2009–if any–and even though I’ve gone on record a couple of times as saying they’re due for a really good season, they’re not going to be so good that another ’06/’07-style blowout is even a plausibility.

What tidbit I found most interesting from Phil Steele’s Georgia preview: There’s just something about Steele’s dry-as-dust prose and deadpan delivery that makes certain descriptions hilarious. Exhibit A, from his review of Georgia’s ’09 season:

Something about the repetition of “pounded” and the lack of commas–giving the second sentence just the same kind of little bit of a rise-and-fall and Georgia experienced–just brings out the giggles.

What tidbit I found most interesting from their associated Wikipedia pages: About the Arch:

Perhaps the most notable North Campus fixture, though, is the cast-iron gateway that stands at its main entrance. Known as “The Arch” (but often erroneously pluralized to “The Arches”), the structure was patterned after the Seal of the State of Georgia, and has faced historic downtown Athens ever since it was erected in the 1850s.[21] Although the Seal’s three pillars represent the state’s three branches of government,[22] the pillars of The Arch are usually taken to represent the Georgia Constitution‘s three principles of wisdom, justice, and moderation, which are engraved over the pillars of the Seal. There is a superstition about walking through The Arch. It is said that if you walk under the Arch before receiving your diploma, you will not graduate from UGA on time.[23] Another legend claims that should you walk through The Arch as a freshman, you will become sterile.

Whatever, they said the same thing in high school about Mello Yello and Mountain Dew* and we all drank that stuff like water. In place of water, truthfully.

What I actually think about this matchup: Trying to predict the winner of any game that late in the season this early is probably madness, of course, but I think it goes double for these two teams this season. Both have serious weapons on offense protected by powerful, experienced fronts, though both quarterbacks’ decision-making is unproven at this stage; both have major issues defensively but lots of reason to believe things will get better; both spent last year alternating huge special teams plays with horrific boners; both have every reason to enter this season hungry as teams with loads of potential that virtually no one outside of their own fanbases expects to beat their archrivals or make it to Atlanta.

With that many similarities and checks-and-balances, you bet I’m expecting a close game. In fact, I’ll go ahead and say that this game, more than any other on Auburn’s 2010 schedule, has the potential to be a stone-cold, all-time classic in the vein of the 2005 meeting.

And I’ll also go ahead and say that with the game in Jordan-Hare, and Auburn having come up so narrowly short in 2008 and 2009, I think the close game favors Auburn ever … so … slightly. But this isn’t a game I’d expect to feel comfortable wagering more than a plug nickel on come November, and it sure as hell isn’t now.