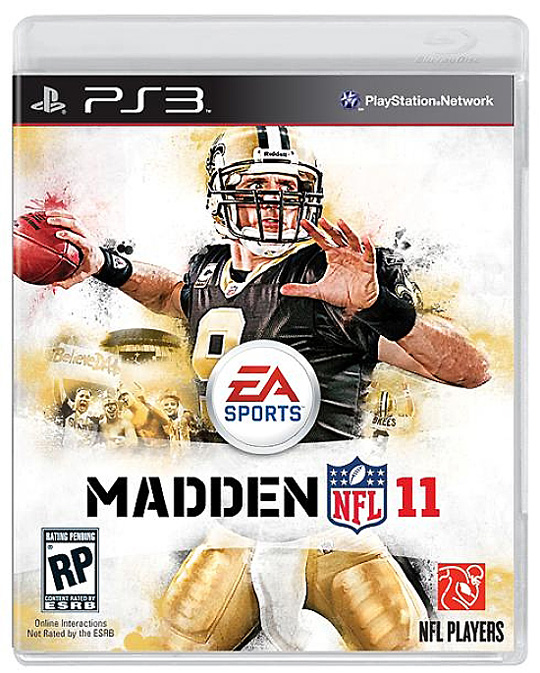 To get me back in the habit of writing for fun after seven months of grad school hell, I’ve done some research on the new Madden 2011 that is coming out next Tuesday.  For those who didn’t buy the game last year, be aware that Madden has drastically revamped its rating system.  Only the elite players are rated in the 90s. If you are in the 80s, you are pretty dang good. The rest of the league is in the 70s and 60s.

Here are this year’s ratings for our former Auburn Tigers.

Quarterbacks:
Jason Campbell #8 – 83, Oakland Raiders – Wearing #8 this year for the Raiders, Jason comes in at a nice overall rating that puts him just outside the Top Ten passers in the league.   Oh yeah, and Leinart (75) sucks.  And Jason White is waiting tables at Chili’s.

Running Backs:
Ronnie Brown #23 – 89, Miami Dolphins – Ronnie comes in with a solid rating for the Dolphins, which is a bit surprising since he can’t seem to stay healthy.
Heath Evans #44 – 82, New Orleans Saints – A good rating for Heath at FB; the other backs on the team are rated similarly with Thomas at 84 and Bush at 83.
Tony Richardson #49 – 94, New York Jets – A stout number for the best fullback in the league, but Tony is getting old. If the Jets have a good season, expect this to be his last (16 years in the league).
Carnell Williams #24 – 77, Buccaneers – but that’s still good for best on the team, which tells you a lot about the Bucs this year.
Brandon Jacobs #27 – 84, New York Giants – Brandon is rated the best HB on the team, though his FB Hedgecock is a little ahead of him in overall rating at 86.
Ben Tate #43 – 72, Houston Texans – Ben got the shaft in his rookie year. He is second best on the team behind Steve Slaton,  listed at 78.  What is frustrating is that Montario Hardesty of the Browns got a 74.  And hey, in case you’ve missed it, Ben is very active on FB.

Wide Recievers:
Devin Aromashadu #19 – 70, Chicago Bears – I don’t know what’s more surprising: that Devin only got a 70 despite the hype surrounding the way he ended the season (282 yards, 4TD in 4 games), or that he is the 4th rated WR on the Bears roster.  I would have assumed that the Bears receiving corps would be garbage.
Ben Obamanu #87 – 58, Seattle Seahawks – Ouch…

Offensive Lineman:
Ben Grubbs #66 – 94, Baltimore Ravens – Best OL on the team despite not having a movie made about him.
Marcus McNeill #73 – 89, San Diego Chargers – A solid rating for Marcus who is one of the 10 best LTs in the league.  Of course, big Marcus is currently holding out for a better contract; lets hop he signs soon.
King Dunlap #65 – 60, Philadelphia Eagles – a little low in my opinion for a guy who was forced into a starting role last year and got some valuable playing time.
Tyronne Green #69 – 66, San Diego Chargers – probably a fair rating for the second year player.
Tim Duckworth #72 – 60, New Orleans Saints – Tim is the worst OL on the team, but it’s a definite upgrade from being on the practice squad last year.

Defensive Lineman:
Jay Ratliff #90 – 94, Dallas Cowboys – Jay is the second best DT in the game just 3 points behind Kevin Williams of the Vikings.
Quentin Groves #52 – 68, Oakland Raiders – Quentin is actually stuck at DE in the game despite some reports that he would be playing LB and is listed as a LB on the team’s roster.  Some in Raider country are really hyped on Groves’ arrival.
Spencer Johnson #91 – 58, Buffalo Bills – Spencer is put at DE in the game, but as far as I can tell he’ll still be playing DT with the Bills.  The rating is pretty low, but let’s be honest – did anyone think Spencer was going to play in the league for 7 years?  The guy is a lunch pail warrior.
Pat Sims #90 – 77, Cincinnati Bengals – Pat is having a good summer and has looked good in practice.  He should be a starter at DT this year for the hopeful Bengals.
Sen’Derrick Marks #94 – 68, Tennessee Titans – The Titans are looking for Marks to be a solid contributor this year.

Linebackers:
Karlos Dansby #58 – 90, Miami Dolphins – I would have liked to see Karlos rated higher. He is one of the best MLBs in the league.
Will Herring #54 – 59, Seattle Seahawks – Opelika kid still hanging on in the big leagues, bringing his work ethic every day.  It’s paying off; Will is now the first reserve linebacker.
Takeo Spikes #51 – 84, San Francisco 49ers – A good rating for Takeo who you should follow on Twitter in order to hear great stories… like about the drug test guy waking him up at 5:30 am.

Cornerbacks:
Carlos Rogers #22 – 79, Washington Redskins – Not a good rating for Rogers who is a starter in DC and the 2nd best on the team. Third best is a 74 (Phillip Buchanon)
Jonathan Wilhite #24 – 68, New England Patriots – I was hoping Wilhite would be in the 70s this year.
Jerraud Powers #25 – 81, Indianapolis Colts –Some nice respect for a second year pro.
Rod Hood #37 – 70, Tennessee Titans – Coming off the Super Bowl run with the Cardinals, Hood really dug himself a hole last year by trying to hold out for more money.  He spent most of the season on the sidelines before finally deciding to stick with the Titans. He’s currently nicked up and is a risk to be cut.
Walt McFadden #22 – 64, Oakland Raiders – Actually pretty typical rating for a 5th round pick.  He’s the 4th best CB on the team with some really stout physical numbers:c 93 speed, 90 acceleration, 93 agility (the Pompano Jook is paying off) he’s a 64 because they make him weak (38 strength) and, stupidly, dumb (45 awareness).  But Franchise players know that he could develop into something nice after a few years with those speed numbers.

Kickers:
Robert Bironas #2 – 93, Tennessee Titans – Bironas is currently one of the best kickers in the league, it’s a shame he had to leave the Plains early due to unspecified team violations of an undetermined street value.

Cuts:
I will try to keep you guys updated on who is staying and who is going during the weekly pre-season cuts.  If I had to guess, I would say everyone below this sentence won’t make an opening day roster except for maybe Pat Lee.  Of those above this sentence, most are safe but injuries could cost some (Rod Hood)  their spots, and some (Spencer Johnson and Ben Obamanu) may be too close to the line.  But I wish luck to all of them.

News and Notes on other guys:

WR Montez Billings #89 is currently on the Saints roster and is performing well in practice.
WR Prechae Rodriguez #85 is playing with the Saskatchewan Roughriders after being traded. He has 12 catches for 189 yards and 2 TDs in 5 games this season.
WR Tim Carter is MIA, last seen with the Rams.
WR Courtney Taylor is very hard to track down, last seen with the Seahawks.
WR/TE Anthony Mix, last seen with the Redskins, is nowhere to be found.

OL Wayne Gandy is one of the best OTs not on a team according to this report and may sign soon.
OL Kendall Simmons is hanging around with the Buffalo Bills.
OL Jeno James is MIA, last seen with the Dolphins.
OL Mike Pucillo’s name has surfaced a handful of times, but don’t expect him anywhere this year.  Last seen with the Redskins.

DE Antonio Coleman is with the Bills and looks like he may make the team, albeit due to the injury to a teammate.
DE Stanley McClover is MIA, last seen with the Texans on injured reserve.

LB Dontarrious Thomas ended last season with the Chargers, but is for the moment with the Sacramento Mountain Lions playing with the likes of Daunte Culpepper and Chris Perry (1st round RB from Michigan).
LB Tray Blackmon is MIA, last seen with the Calgary Stampeder’s in the CFL.

CB Pat Lee #22 is with the Packers but didn’t make the game. Lee missed last season with an injury but has made some plays in practice.
CB Kevin Hobbs #23 is currently with the Lions.

K/P Damon Duval #15 is kicking with the Montreal Alouettes.

Questions? Comments? Anyone you want to know about that’s not listed?  Let me know and I’ll have it up next week!