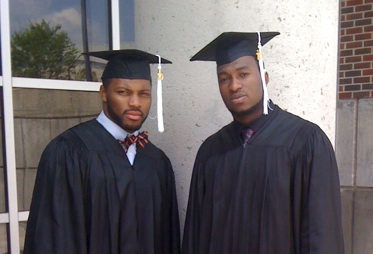 Congratulations. First, about the above pic of @SupurMario27 and @TZAC81AU: yeah, we posted it yesterday. But the pic’s too good and Jeremy’s title too clever to let you miss it.

A hearty WBE handshake and congratulations is extended to one and all. You’ve done us proud.

But while we’re on the subject of academics … there’s not much I’m willing to label “unacceptable” these days when discussing college football, since that’s a term mostly used by message-board types frothing at the mouth over only beating Cupcake U by four touchdowns instead of five or six. But yeah, for me, this is just about unacceptable: 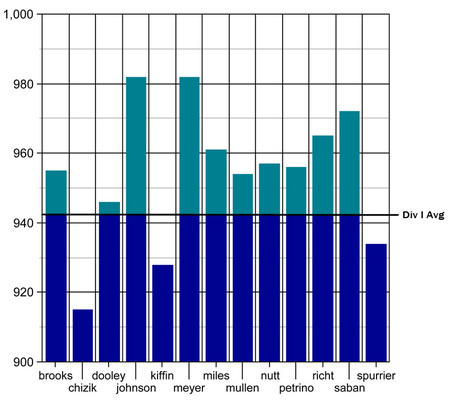 That’s a graph of the SEC’s 2009 APRs. It’s just one year, yes, but in that one year, as measured by the APR, Auburn’s football team was the worst in the SEC academically. And one of only three to fall below the Division I average.

That will not stand. That’s not to say I can’t (mostly) excuse Chizik and Co. for this one poor showing; it’s a transition year, with lots of attrition and new procedures in place, and that results in poorer APRs just about wherever you are that’s not a Vandy or Wake Forest. And rest assured it’s not likely at all that Auburn ever sees actual penalties, even in the event this number doesn’t improve. And it’s true that the APR isn’t a perfect measure of academic achievement.

But as Curtis Luper so famously said about recruiting rankings, if they’re keeping score, you want to win. This is the NCAA’s way of keeping score, in a game that’s frankly much more important than a set of semi-arbitrary guru rankings. And Auburn didn’t only lose in 2009, they got their rear ends handed to them. It truly is not acceptable, and Auburn must do better in 2010.

“I am both excited and thankful for the opportunity to coach in what I believe is one of the top athletic programs in the country,” Graba said. “I am looking forward to the challenge of trying to improve on an already quality gymnastics program, and to compete in the SEC, one of the premier conferences in the country. My family and I are also thrilled to be a part of the Auburn Family, and we can’t wait to get settled.”

Graba, who was the 2009 West Region Assistant Coach of the Year, coached two NCAA event champions and nine All-Americans that earned 20 All-America honors during his tenure at Utah.

A 22-year coaching veteran, Graba figured prominently in the program’s best span at Utah since the 1990s as he coached the bars, collaborated on the floor routines and served as recruiting coordinator.

“We are very pleased to bring someone of Jeff’s caliber and experience to Auburn,” Jacobs said. “He has played an instrumental role in the success that Utah has enjoyed during the last five years, and we believe Jeff can elevate the Auburn gymnastics program to new heights. We welcome Jeff and his wife, Bridget, and their five children to the Auburn Family.”

If you’re going to hire an assistant, it makes sense to hire one from one of the best programs in the country, right? Just one favor to ask, Jeff: could you beat ‘Bama for us? That’d be great, thanks.

BlAUgosphere. To the “fantastic ideas that will never, ever happen for any reason” file (along with my suggestion that Auburn simply play Florida as a non-conference game) Jay Coulter adds the possibility of a Week 1 SEC/Big 10 football challenge. Again: this will happen when the sun goes nova and the pigs are leaving the earth via their newly-evolved Oregon-approved emo wings, or just before. But how incredible would it be if the first week of the season, instead of the annual routine of bodybag games, we had six primo SEC-vs.-That-Conference-Up-North match-ups to brag about/mourn all season long? If Auburn got to visit or host teams like Michigan or Iowa or even those weirdos from Purdue on an annual basis? Based on the results of the Northwestern meeting, it’d be a hell of a time. I should stop thinking about this right now, actually, before I get my hopes up.

Elsewhere, Kurt at WarBlogle is counting down his top 30 games at Jordan-Hare Stadium, and if I find some of his early selections … eclectic, shall we say, the memories make the series still well worth the read. You may know friend of the blog and longtime Auburn Internet guy Chad Gibbs; he has a book out.

And as always, there’s lots to see here at TWER: J.M. returns with a look at the less-than-harmonious relationship between Emmitt Smith and the U of Florida, and how Auburn has played its small part in it; also among yesterday’s graduates is de facto TWER spokesmodel Alice “Snorg Girl” Fraasa; and though it’s been up for a while, if you missed the “Runaway Train” tour of 1945 Auburn at eBay, now’s the time.

Over there. Best wishes to the Tide’s Kendall Kelly, who’s been removed from practice and possibly the Tide’s roster for a scary-sounding heat-related illness (one that started at an evening practice, though). Hope for his sake it’s nothing too serious, though the current expectations from Tide fans are that he’s going to miss the entirety of fall camp.

From a football perspective, this is the worst place on the field for the Tide to have this happen; Kelly’s a safety, and between this and the Rod Woodson dismissal the already-thin (by their standards) ‘Bama secondary looks thinner by the day.

Etc. Via Justin Hokanson’s Twitter feed, Tommy Thigpen said that Auburn’s 2010 recruiting class is the best he’s been a part of; given some of the hauls he helped Butch Davis with at North Carolina, that’s saying something … speaking of Twitter, Tony Barnhart’s blaming it for the death of open practices, though I think general coaching paranoia and the increased willingness of fans to side with their team over the local media probably has more to do with it … Smart Football explains why it’s tough stuff to install a Bill Walsh-style West Coast offense at the college or high school levels; where was he when Todd Berry was getting hired at Army? … CFN’s getting their CFN on in regards to Auburn’s predicted record. They’ve got Auburn slotted at No. 23 preseason, FWIW … and for anyone still jonesing for a USMNT fix after the World Cup, the Yanks play Brazil in a friendly tonight at 7. If Bradley starts Robbie Findley again, I’m going to set something on fire, so that should be fun.