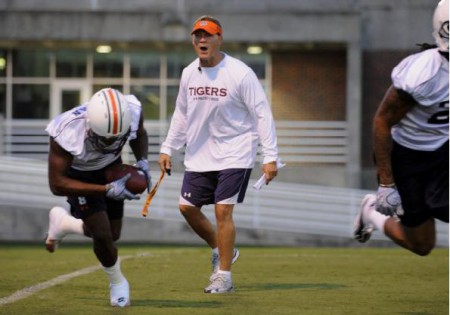 No earth-shattering developments at Auburn’s storm-delayed, late-evening practice Friday night. But courtesy of Messrs. Bitter, Tate, and Gribble, we’ve got a few things worth passing on. And they are:

— Not necessarily surprising considering that his skill-set and size mean he’s the closest thing on the roster to Tommy Trott, but Shaun Kitchens said he’s been “doing some H-back things,” in Bitter’s words, i.e. blocking, blocking, and blocking. A 6’3″, 217 de facto tight end with the agility to line up somewhere in the backfield? Yes, please. Of course, just yesterday Trooper Taylor was saying how much he enjoyed having a threat like Kitchens on the goalline. Will be interesting to see where he sticks.

— Also in less-than-shocking news, Jeff Grimes has declared the right tackle position wide open. Tate says it’s most likely Brandon Mosley or John Sullen. Bitter adds Roszell Gayden’s name into the mix. Grimes himself says “I wouldn’t rule out a freshman, either,” and Tate reported that Ed Christian had moved up to the veterans group. Your guess is as good as mine. I suspect anyone’s guess is as good as anyone else’s.

The important thing: that someone make the job theirs and, preferably, makes it theirs soon. I know Grimes says he doesn’t care how soon he settles on a starter, but the sooner the rest of the line know the No. 5 guy, the sooner they can start creating the kind of chemistry we all know the line could use. It’s one thing to plug in a fifth-year senior alongside four other stalwarts, the way Auburn could with McCain last year; it’s another to do so with JUCO transfers and a true sophomore.

— Chris Todd was back to check out practice, which is pretty cool considering that at a couple of points in his Auburn career, he must have felt like putting the Plains in his rearview and never looking back. AuburnUndercover spoke to him and got an update on his effort to make an NFL roster and a few quotes on his Auburn career. He’s happy, we’re happy.

— I’d recommend checking out Jay Tate’s photo gallery, because if you were wondering how big Jawara White and Ladarious Phillips are, there’s some pics that should help give you some answers. (Those answers: they’re freaking huge, man.) Phillips is at least down to 285 for the time being, according to himself.

— In injury news, Justin Delaine appears to be participating in practice, so despite a cramping problem, that’s a step forward after he missed time yesterday and Wednesday. And Deangelo Benton’s arm is out of the sling. Those two developments plus no new bodies on the sideline equals a positive. Sounds like Travante Stallworth’s not quite 100 percent, though.

— Ryan White still spent time with the quarterbacks, but also switched over to work with the defense as well. The split personality will probably last a few more days before he’s a full-time defender, I’m guessing.

— It’s not really newsworthy that Taylor ran over to give Neiko Thorpe a back-bump for his good work in a sled drill, but in case anyone was wondering if Taylor’s, ahem, performances on game days were just for the cameras: No. He’s like that all the time.

— You can add Craig Sanders to the list of the team’s new workout warriors; he’s added 25 pounds since the spring and earned the nickname “The Animal” from Antoine Carter for his weight room intensity. I’m delighted to have anyone at Auburn have the nickname “the Animal,” even if it’s a white kid from Ariton. Actually, it’s even better that it’s a white kid from Ariton.