Here’s how that happened:

Typically it was beer, but that night, for whatever reason, it was drinking games with Jack and Coke. The whole day had been weird like that, in a bad way–bad enough for him to have called it a bad day even if he hadn’t been run over by a train.

He wasn’t taking classes at Auburn that summer so he’d been working all day at Little Henry’s apartments–the family owned the place, they still do–and it was hot and he was tired and cranky and didn’t really even feel like going to the party. But whatever, it was Friday. It was a house on Debardeleben, about a mile from where he lived, at this little house behind Glenwood Apartments off East Glenn.

He was drunk when he left. Not drunk enough to think he could drive, but drunk enough to not be able to walk very well, which no one noticed because he slipped out without telling his friends he was leaving. He found the tracks and headed home. It was around midnight.

He got within a hundred yards of the house. It happened somewhere between College and Donahue. He doesn’t remember hearing the whistle. He doesn’t even remember getting hit. He remembers being under it a little bit and talking to the paramedics.

Um… you kind of don’t have your feet anymore.

“Best I can tell, when I left the party, I was still functioning pretty well,” Woody says. “I walked about a mile and probably tripped on one of the ties and fell down. I probably just sat there trying to collect myself. They said I sat up at the last second.”

It was just a normal cargo-carrying CSX train, coming from the west, heading toward Opelika, but only at 10 or so miles an hour because of some likely life-saving malfunction they were having that night. He wound up under the second engine. His jaw was broken, and his arm and collarbone. And they were right. His feet were gone.

The CSX people checked on him in the hospital. They reminded him that it was technically private property. They didn’t press charges.

It was exactly 21 years ago.

“I remember thinking in the hospital that I would have to use a wheelchair,” he says. “When my mom told me the doctor said I would be able to use prosthesis to walk with, that was all it took, because that was better than what I was thinking.”

Life came back slowly. One of the first outings was fan day before the 1989 season. His parents took him and brought a camera. He was in a wheelchair and got his picture made with Stan White and Wyn Lyle (so did I – I was 10.) He and Wyn wrestled together at Auburn High.

He went to every home game that year. The ’89 Iron Bowl is still his favorite. He started back to school in spring quarter. He graduated in ’93. He got married. He got his first set of legs. He got right with the Lord. He worked down from crutches to two canes to one cane to now, at 41, nothing.

Several years and surgeries later, Thornton started CAST (Christian Amputee Support Team) Ministries, to help others amputees cope with life, physically and spiritually. CAST’s motto – “Life defined…Not confined” – comes from Corinthians 12:9-10, which Paul ends with “For when I am weak, then I am strong.” The 50 or so members (most of whom are within an hours drive from Auburn) have fish fries together. They go to Biscuits games. They just got back from a big trip water-skiing – The AmpuSki Clinic – up in Ohio. The ministry started in 2006. It gets bigger every year. The stripes are one of the reasons why. 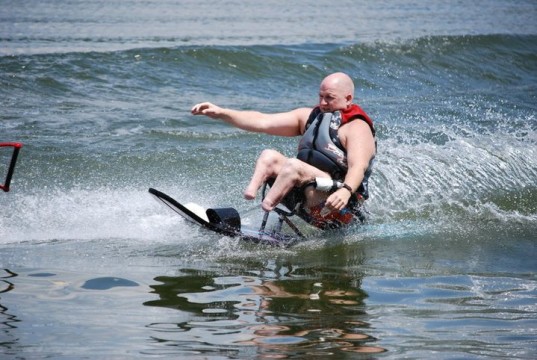 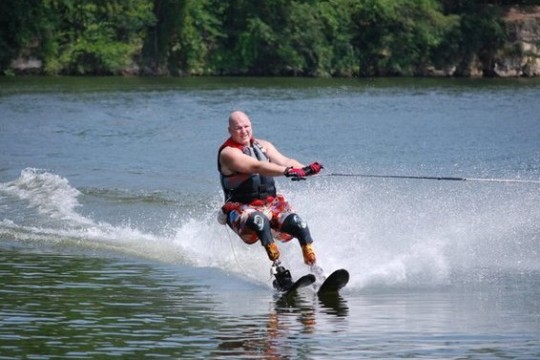 “Originally my legs came all the way down to my ankles. I had a bilateral amputation and they took out all the foot and ankle bones and it was like that for about 15 years, but then I started having problems with the bottoms,” he says. “So back in 2004 and 2005, I basically elected to have revision surgery and shorten the legs a little. That allowed me to wear better prosthesis. I had a better stump to work with and I quit wearing skin coverings. They could laminate whatever I wanted to my socket, so I went with the tiger stripes.”

Why? War Eagle, duh. But also because when you see a guy with bionic, tiger-striped legs, you know he’s obviously OK with stares and… you know, maybe it’s a little less awkward for everyone.

“One of the reasons I like wearing them is because to me, it’s easier for someone to start up a conversation about them, and gives me a chance to witness to them and everything,” he says. “If I have long pants on or skin (color), it’s not as noticeable, so it’s the biggest way to meet new amputees or folks that have amputees in their family. But in Auburn, most people just come right up to me and say ‘War Eagle’ and tell me they love the tiger stripes.”

Aubie has to be worried.