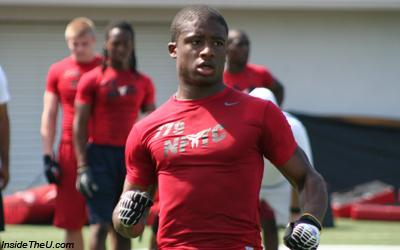 Prepare yourself … for what could be the most important “Google surveys …” posts … ever!

OK, not really. It’s August, the 2010 season-of-hype train is rolling, I thought I’d get into the spirit. But despite the lack of buzz surrounding him … and the middle-of-the-road guru reviews … and the lack of drama in a straightforward recruitment … where 2010 is concerned, Jonathon Mincy is as critical a member of his recruiting class as anyone.

Why? Because we need corners, man: I’ve mentioned it a few times already, but thanks to the departures of Harry Adams and D’Antoine Hood, we’re down to Thorpe, Washington, Bell, and Morgan on the existing roster, and that’s it. Which is why Auburn signed three future corners in this class, but with two of them converting from quarterback (and one of them not even converting full-time just yet), Mincy’s the one at the top of the “immediate playing time” pecking order.

And so Mincy ‘s one injury away from becoming Auburn’s dimeback almost by default, one player surpassed on the depth chart plus one injury away from being the nickelback … and nickels are all but starters in these days of frequent three-receiver sets. Aside from the obvious immediate-impact guys like Dyer or Reed or the JUCOs, Mincy’s as likely to get serious, non-special teams playing time this fall as anyone else in his class.

HIGH SCHOOL: Ranked 27th on the Atlanta Journal Constitution Top 50 …Ranked as the No. 32 player in Georgia by SuperPrep … Named to the All-Southeast Region team by PrepStar … Played in the 2009 Georgia Athletic Coaches Association North-South All-Star Football Classic and the Dekalb County All-Star Game … Honorable mention selection to the 2009 4A All-State Team … Named to the All-Region 6-AAAA in 2008 … Had 58 tackles and five interceptions as a junior in 2008.

I’ll be honest: I have no clue why he’s listed as a safety here. As far as I can tell, every other mention I’ve seen of Mincy lists him as a corner; he played corner for Dekalb’s defense; Demetruce McNeal said repeatedly Auburn’s coaches had told him he’d be their only (true) safety recruit, even after Mincy committed. I think he’s a corner and will keep thinking so until we discover otherwise, but maybe the AUfficial site guy knows something we don’t.

A quick word about Southwest Dekalb: it’s one of the most loaded programs in the Southeast, playing at the highest levels in Georgia. Mincy’s not going to be overawed moving up to the college level.

RECRUITNIK HOO-HA: Nothing too terribly exciting to report here, as the gurus had Mincy ranked squarely in the middle of Auburn’s class. Rivals and ESPN both agreed that Mincy was an above-average three-star, with grades of 5.7 and 78, respectively. Rivals had him as the No. 38 corner and No. 35 in Georgia (five slots ahead of Shaun Kitchens, for what that’s worth), ESPN the No. 29 corner. Their evaluation:

Mincy is a well-rounded, athletic cornerback prospect who can simply find the football in coverage and make plays. Does not show elite skill set in one particularly area but is versed in zone and man schemes. Has just adequate height but a longer, rangier body. Is high-cut aiding his good acceleration and makeup speed but often hindering his ability to stop-start and mirror in off-man. Excels in deep man-to-man coverage; soundly tracks the throw, adjusts his body and goes up to attack the football. Shows good leaping and high-pointing (this is a word?–ed.) skills … Shows above average explosiveness and strong plant and drive skill closing the cushion and jumping underneath routes. However, he does need some polish in technique as he’s relied on a lot of natural ability and speed in high school … Has desired arm length to press but not the upper-body strength yet to jam /reroute bigger receivers at the next level. Shows he can be physical when collisioning (???–ed.) routes but can struggle at times setting the edge on run support and wrapping up soundly as a tackler without lunging … Good range and deep coverage skills may garner a look at safety as well if he can continue to physically develop.

Scout was the outlier, ranking him all the way down at No. 66 on their corner list. Their scouting report:

Mincy is a smart corner and one that likes to play press or soft coverage. He loves to be aggressive in man to man, but his strength could hurt him a little against the bigger receivers in college. He is a little thin and light, so he needs to get bigger and improve his strength. One of his biggest strengths are his hands. If in reach, he can make a play on it and turn the ball over.

So, Mincy is “well-rounded” and “smart” and “simply … make(s) plays” with great hands and still has some upside to explore by getting stronger and thicker … but he’s only OK as a prospect. Whatever, gurus.

Mincy’s offer sheet suggests they’ve got him underrated: LSU, Georgia Tech, Tennessee, Miami, Michigan, North Carolina, Ole Miss, Vandy (we mentioned he was smart, right? Rivals lists a 3.2 GPA). If he’s not an SEC-caliber player, a lot of coaches are wrong about him.

As you can see, he breaks up passes. Also, he returns things. His punt/kick return skills don’t seem to be quite as big a selling point as they’ve been for some other members of this class, so it seems unlikely he winds up with either of those jobs at Auburn, but you never know: he nearly won a game against Clarke Central with a last-minute kick return, for example. This description makes it sound like he know what to do with the ball in his hands as well:

When Malcome hobbled to the sidelines with two minutes left in the third quarter, Southwest turned to two others on its all-star roster of college prospects. Marques Dixon, who has an offer from Southern Miss, had an electrifying 43-yard run in the fourth quarter to set up Southwest’s clinching score.

Four plays later, Jonathon Mincy ran to his left, found nothing there, and then cut back toward the other direction for a dazzling 20-yard touchdown play. Mincy has pledged to Auburn at defensive back.

“I saw an opening in the middle, so I went for it,” Mincy said. “[Malcome] is our workhorse, but other players have to pick it up when he’s out.”

We probably won’t see those kinds of skills until Mincy starts picking off passes, but it’s good to know they’re there.

Free Scout article (and more film) from last May on his recruitment. Strangely enough for a prospect that would commit to Auburn in a little more than a month, Auburn doesn’t figure too prominently. But I thought it was interesting that Ole Miss’s Terry Price had been the most fervent pursuer; I’ll get to why in a second.

Also, this just made me  laugh …

The Gamecocks offered recently; what does he know about South Carolina?

“I do not know too much about the history of South Carolina, but I watched a couple of their games last year on TV, and they have a really solid program.”

“They won the national championship a few years back and are always playing in bowls.”

“I really do not know too much about their football program.”

Always an uphill battle for the Tar Heels, I’m guessing.

Josh Bynes said at SEC Media Days that Mincy was one of the newcomers who had stood out:

`(Mincy) has come in and understands a lot of the stuff,” Bynes said. “He’s been out there doing his thing.

Reputation for smarts and preparedness: check.

Lastly, Jay Tate thinks Mincy “may be the most underrated player in Auburn’s class,” and he’s got reasons.

WHAT CONCLUSIONS WE CAN DRAW, IF ANY: I can’t say it surprised me in the least to find that one of Tubby’s old coaches was recruiting Mincy and recruiting him hard. Because in a lot of ways, Mincy reminds me of a prototypical Tubby recruit: not much guru hype, not much size or flash for his position, not much in the way of crazy raw upside … just a lot of on-field and off-field intelligence, a lot of understanding of the game of football, a lot of just being a good football player.

Tubby–and Chizik, in his previous stint on the Plains–made a living off of those kinds of guys, especially at linebacker. I think there won’t be any problem doing so again. Mincy may not be more than a dimeback this season, but he could easily be a starter as soon as next year–remember, there’s going to be at least three open spots in next year’s secondary, and possibly four–and if he is, he may just never give that position up. The chances that a player this solid all-the-way-around is not a regular in the Auburn secondary from ’11 through ’13 strike me as very, very slim.