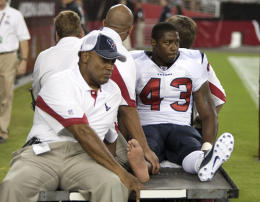 Despite some crisscrossed stories coming out of Houston (and locally), Ben Tate is, in fact, out for the season with a fractured ankle.

It’s sad, even depressing news that brings back memories of Kenny Irons’ unfortunate stint with the Bengals: both Tate and Irons were 2nd round picks, both had nasty injuries in the preseason, both missed / will miss their rookie season in the NFL.

Houston Texans coach Gary Kubiak lamented the loss on Twitter: “I was hard on him (Tate) because I knew he was fixing to help this team a great deal.”

Kubiak calls the injury “very significant.” The Houston Chronicle is already hinting “bust,” considering Tate is the highest drafted running back Kubiak and Co. have landed for the Texans.

Heath Evans missed most of last year. Has Ronnie had a complete season yet? Carnell has had two injuries that would have ended a lesser man’s career. Rudi Johnson got hurt and disappeared. Kenny Irons didn’t play a single down in the regular season.

I’ve got an idea.

Back in 2000, after another routine loss to Florida, a friend showed up with a Gators shirt on. We (politely) removed it, had a ceremony, and promptly burned it. Since then, we are 3-1 against the Gators. Maybe we should have Jeremy print a shirt that says “Auburn Running Back Injuries” and then we can burn it.  Run off some bad spirits.