A week-by-week preview of Auburn’s 2010 opponents. But since you can find straightforward overviews in a half-dozen magazines and a ton of places across the web, these are a little more … disposable. Light. Cheese-puffy. Previously: Arkansas St., Mississippi St., Clemson, South Carolina, UL-Monroe, Kentucky, Arkansas, LSU. 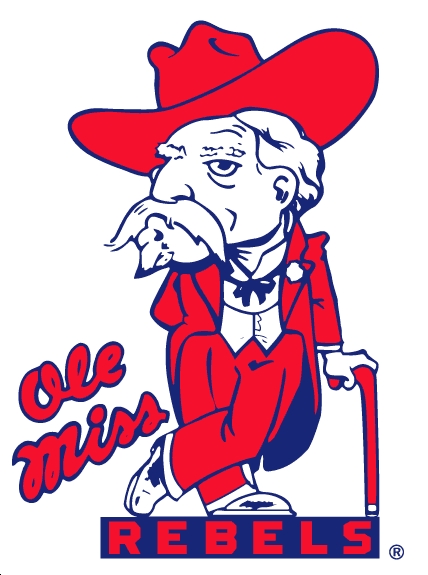 What their logo tells us about their football team: Um … let’s just say their best days are behind them–far behind them–and leave it at that.

What happened for them last year: Well, when an Ole Miss season starts with something like this, you can’t really expect it to end in glory, can you? Not that the season was bad at all by Ole Miss standards; in fact, a 9-4 mark capped by a Cotton Bowl championship (the ugliest bowl victory since Auburn downed Nebraska, but still) is, in fact, pretty damned good. But they were supposed to challenge Alabama for the SEC West title, of course … and by the time they’d lost to South Carolina, gotten clobbered at home by the Tide, been party to Auburn’s season-resuscitation, and finally been creamed in Egg Bowl, they were a long, long, long way away from trips to Atlanta and SI covers. The year before, that season would have been a success (and was). In 2009, it was not.

What happened the last time these teams met: Usually I take this space to make up something funny, but this time, I’d like to take the opportunity to remind you of this … and, more to the point, thank Rodney Scott again. If you polled Auburn fans who their favorite non-Auburn college football player is, I would hope Scott would win in a walk. He’s WBE’s by a mile, that’s for certain.

What actually happened … you know, game-wise: After three weeks of incompetence, Auburn opened up against Ole Miss by … giving up a 94-yard touchdown drive, getting stuffed on 3rd- and 4th-and-1 at midfield, and allowing multiple other first-half drives into Auburn territory. If it hadn’t been for a hella-fortunate replay reversal of an apparent Rebel interception, Auburn might never have gotten off the ground.

Of course, once they did–getting a 90-yard touchdown drive to take a 10-7 lead into the half, getting two more TD drives either side of a McFadden pick-six in the third for a 24-point advantage–they didn’t look back. Well, they looked back a little in the latter part of thrid quarter, allowing a kick return TD and a long McCluster score, but Ole Miss never had a chance to tie the game as Auburn’s defense stiffened and Jevan Snead showed off the form that would get him drafted in the Neverth Round. In the end: a fairly comfortable 33-20 Tiger victory.

What two things about the Rebels are causes for alarm: 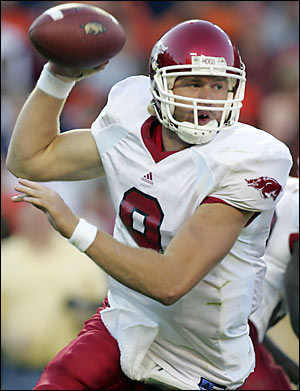 … and what Houston Nutt did to us with him at the helm, I’m going to remain nervous about pairing that coach with a quarterback who can run the way Masoli can. If he plays, eventually Nutt’s going to figure out what to do with him, and the Rebels are going to beat someone they shouldn’t when Masoli explodes. As late in the season as Auburn meets the Rebels, it could very well be the Tigers.

2. There aren’t many teams on Auburn’s schedule who I look at and think “yeah, we might struggle to run the ball against those guys” … but we might struggle to run the ball against these guys. Kentrell Lockett and Jerrell Powe are both as good as any defensive linemen in the SEC. Between D.J. “Rusty” Shackelford and Joel Kight on the young side and Jonathan Cornell and Allen Walker on the older side, the linebacking corps has a nice mix of veteran experience and rising talent. Overall: this isn’t a bad front seven at all.

I kind of think Auburn is so loaded in the running game that they’ll be able to run a little bit against anyone. But it won’t come as easily against the Rebels, and if Newton has one of those erratic kind of days it won’t be surprising at all to see him have a couple of … well, a win won’t come easily.

What two things about the Rebels are causes for confidence

1. Are you aware of how dominant Auburn has been in this series? Are you? Really? Then how many times has Auburn lost to the Rebels in their last 27 meetings?

The answer is “four.” Four times. The 1998 Tigers? Beat the Rebels. The 1991 Tigers? Beat the Rebels. The Rebels are much better now than they were then, of course. But as last year’s result helps show, almost regardless of the level of the two teams, this is just not a program that Auburn’s had to fear over the years. If Auburn is the better team, and they should be this season, the overwhelming precedent is for an Auburn win.

2. I went back and looked at the box scores for the Auburn-Ole Miss games for both 2008 and 2009. Players on the Rebels’ current roster accounted for …

14.4 percent of the Ole Miss rushing yards, and

And of those yards, Branden Bolden alone had better than 95 percent of those.

The point: without Dexter McCluster, without Shay Hodge, without Cordera Eason, without Mike Wallace, without Jevan Snead, the Rebels don’t have anyone who’s ever done a thing against Auburn at the skill positions.

What tidbit I found most interesting from Phil Steele’s Ole Miss preview: OK, so that’s just the skill positions. On the offensive line:

And there’s no McCluster, so the running game should be taking a big, big step backwards. Good thing they have such a strong quarterback and passing game to fall back on.

What tidbit I found most interesting from their associated Wikipedia pages: I knew James Meredith’s enrollment was, uh, unpopular. I did not know it resulted in a pair of execution-style murders in the midst of the rioting on Ole Miss’s campus.

What I actually think about this matchup: I know, I know, Houston Nutt is at his most dangerous when yadda yadda yadda, and that probably goes double if you’re Auburn.

But they’ve lost so much: their only two threatening offensive weapons in McCluster and Hodge, arguably their best three offensive linemen, their quarterback (mediocre as he was), their best linebacker, and most importantly where the defense is concerned, the best three-fourths of a secondary that carried the unit last year. Nothing much is expected of them for a reason.

Maybe that wouldn’t matter so much if Oxford had been a booby trap for Auburn over the years, but, yeah, it hasn’t much mattered where the game’s been played; when Auburn’s had the better team, Auburn’s beaten the Rebels. I don’t expect that to change this year, not when Auburn has the kind of offensive firepower this particular group of Rebels can only wish for and sigh about.

No, it’s not a sure win, not with Nutt involved, not on the road, not given Auburn’s roller-coaster season of a year ago. But is it any more threatening than the trip Kentucky? Is it even as frightening as the trip to Starkville? Not if you ask me, not until or unless Masoli is something much, much greater than I’m expecting him to be.