A week-by-week preview of Auburn’s 2010 opponents. But since you can find straightforward overviews in a half-dozen magazines and a ton of places across the web, these are a little more … disposable. Light. Cheese-puffy. Previously: Arkansas St., Mississippi St., Clemson, South Carolina, UL-Monroe, Kentucky.

What their logo tells us about their football team: Well, it’s a pig. But a bright red pig, a pig the color of blood. With, geez, I don’t know, some kind of fangs sprouting from both its upper and lower jaws. And holy crap, it’s got fire shooting out of its rear end! Wait, no, that’s it’s tail. But the hair on its back definitely has some ’80s punk-style jaggedness going on; I think it must have been an extra in the subway scene from Adventures in Babysitting or something.

Look, it’s still a pig. But this is the sort of pig that I don’t feel comfortable around. It’s the sort of pig that gives you the feeling that you can’t really predict what the hell it’s going to do. Trip over its oversized hooves? Win 11 games? Put its eye out with its own fang? Spear you with its pointed ear? Everything’s in play here.

What happened last year: The Hogs were damn good when they were on and damn well weren’t when they weren’t. Behind the erratic arm of Ryan Mallett, the Hogs crushed bowl-bound teams like Texas A&M by 28; Auburn by 21; South Carolina by 17. They also came closer to anyone to handing Florida a regular-season loss, falling by three after a series of missed field goals by beleaguered kicker Alex Tejada. But the Hogs also lost 35-7 to Alabama; 30-17 to Ole Miss, giving up 553 yards in the process; and 52-41 to Georgia at home, giving up 530 yards on that occasion. The bowl win wasn’t exactly a thing of beauty, either; the Hogs were outgained by 110 yards and scored one offensive touchdown in their U-G-L-Y (it ain’t got no alibi) 20-17 win over East Carolina. When all was said and done, it amounted to an 8-5 campaign and part of the three-way tie at the bottom of the SEC West at 3-5. Houston Nutt’s year-to-year volatility might have gone with him to Ole Miss–the jury is still out–but on the basis of ’09, his game-to-game see-saws have most definitely not.

What happened the last time these teams met: Chris Todd and the rest of the Auburn offense walked over to coordinator Gus Malzahn.

“We’re ready, coach,” Todd said, with several nodding heads behind him. “It’s time to get this game started. We’re psyched. We’re pumped. Those guys aren’t going to know what hit them. We can’t wait to get on that field. LET’S DO THIS!”

“Oh,” Todd said. “Guess we should have cut off our locker-room dance-off a little bit sooner.”

Malzahn sighed and sent Todd and the rest of the offense onto the field, where they remained for three plays before returning.

What actually happened: That description’s probably not all that far off, truth be told; Auburn’s previously torrid offense didn’t put the ball in the end zone until well into the third quarter, by which point the Tigers were already down 34-3 on the road. Three consecutive TDs made things interesting for just a bit before the Hogs pulled away for a 44-23 win. 5-0 would go on to become 5-3 before we knew it. Blecch.

What two things about the Razorbacks are causes for alarm:

Auburn taking on Arkansas as a favorite is, as you can see by the sordid, disgusting history above, a recipe for disaster. Actually, being a favorite in this series, period, is a recipe for disaster; the Vegas fave has only won twice (2004 and 2005) since the year 2000. But this year, it seems a lot more likely to be Auburn cooking that particular recipe. 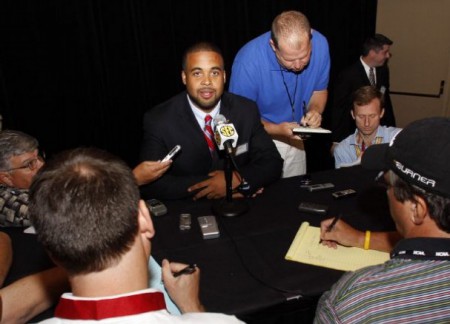 He’s only the best tight end in the SEC. Ryan Mallett was kind enough to Arkansas’s opponents last year to mostly ignore him in favor of throwing 35-yard darts between three defenders, but eventually you’d think he’d learn. Plus they have Greg Childs, Jarius Wright, and Joe Adams, any one of which would start for, oh, 9 or 10 SEC teams.

In short: this is one of the best receiving corps in the country, possibly the best in the SEC. And as much faith as I have in Messrs. Thigpen, Looley, and Roof and their charges, Auburn’s current first-choice secondary features three players who did not start at their current position last year and two who didn’t play at all. The matchup could be better, that’s all I’m saying.

What two things about the Razorbacks are causes for confidence:

1. Let’s just check out Arkansas’s recent road record, shall we:

Granted it’s been a tough road for the Pigs the last two years, but here’s what they’ve done:

Ouch. And before John Q. Hog fan replies “2006/2008,” this year’s Auburn offense is going to make both those units look like an even worse version of the 2006/2008 Auburn offenses, and this year’s Arkansas defense is going to make their 2006/2008 defenses look like Buddy Ryan’s NFL units. The game being in Jordan-Hare remains a huge, huge advantage for Auburn.

2. I’m giving myself an extra Phil Steele quote in this preview because this one on the ’09 Hogs is just too awesome:

So, yeah, that 3-5 SEC record? Despite the close calls against Florida and LSU, the Hogs came by it honestly. So did Auburn, of course, but our turnover margin is actually due to get better rather than nose dive and we don’t have nearly so far to go in the yardage department. (Auburn was +6.9 ypg in league play.)

In short: based on the season as a whole, Auburn was a bit better team last year … and if both teams improve at similar rates, Auburn should be a bit better again this season.

What tidbit I found most interesting from Phil Steele’s Arkansas preview: On Mallett:

Amazingly he was the MVP of the Liberty Bowl despite hitting just 15-36 for 202 yds and Ark converted zero of 13 third downs.

Mallett’s next trick was to miss all of spring with a foot injury. Your Heisman front-runner, folks!

What tidbit I found most interesting in their associated Wikipedia pages: I sort of knew this already, but the number remains truly, genuinely eye-popping:

The most successful program in NCAA history, the Arkansas men’s track and field teams, led by head coach John McDonnell are the most decorated teams in the athletics department. The program has won 42 national titles in Cross Country and Track & Field.

Please remember this, you trolls who declare Arkansas a lesser member of the SEC just because they’ve had the temerity to not win a league title in football just yet.

What I actually think about this match-up: I think–and I think strongly, if that is such a thing–that Auburn is going to have a better season than Arkansas. Our offense is going to be just as good as theirs (or within the same ballpark), our defense will be better, thanks to Mallett’s weekly yo-yoing and the Hogs’ potential downturn in turnover fortune I expect Auburn to be more consistent week-in and week-out, and our schedule’s comfier. I’ve sure been wrong before, but I just don’t see the Hogs keeping pace with Georgia and Auburn in the race for SEC No. 3 Or Maybe Better. They’re just not that good.

The unfortunate part is that all of that has nothing to do with who wins the game in J-Hare on Oct. 16. In fact, it might work against Auburn, as the long history of upsets in this series demonstrates. The better Auburn plays in the first several weeks of the season, the worse it seems to play against the damn Hogs.

So I don’t know. Every game up to this one, I’ve felt reasonably confident in an Auburn victory (if terrified of an Auburn defeat on the trip to Starkville, admittedly). But this is the sort of game where I’m not going to feel confident until the clock hits zeroes. It’ll help if the Hog defense is as poor as widely expected–Big 12-style 45-40 shootout, anyone?–but the ultimate key to this game is simply whether Auburn focuses on the task at hand or doesn’t, whether they show up ready to play or don’t, and how are we supposed to predict that this far ahead of time? The Tigers should be perfectly capable of ending our frustration against the Hogs this year, particularly at home, but if Auburn always played up to its capabilities against Arkansas, we wouldn’t have to worry about that frustration to begin with.