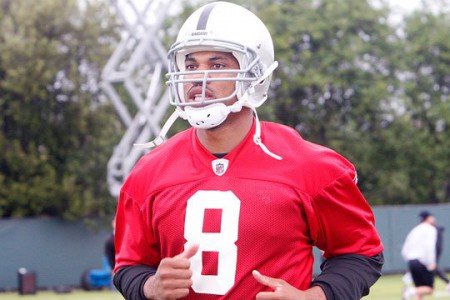 Give ’em hell, Jason. I don’t make too much mention of what’s going on with Auburn’s NFL alums, since 1. we’ve got somebody to do that already 2. my plate tends to pretty full with what’s going on just with Auburn’s future NFL alums. But after all the hell the Redskins, their fans, and the D.C. media have put Jason Campbell, damn right I’ll make an exception for ESPN’s Len Pasquarelli calling Campbell “a major steal”:

Starting in all 16 games for the Washington Redskins, in his fifth NFL season, Campbell completed a career-best 64.5 percent of his pass attempts (327-of-507), and the one-time first-round pick (in 2005) also notched career zeniths in yards (3,618) and touchdown passes (20).

So not too bad, right?

Not since 2002, when Rich Gannon connected on 67.6 percent of his attempts, have the Raiders employed a starting quarterback with a completion mark in excess of 60 percent. The last time an Oakland quarterback threw 20 or more touchdown passes was in 2005, when Kerry Collins recorded 25. And the Raiders have gone four straight seasons without as many aggregate passing yards as a team as Campbell rang up individually in ’09 …

The Raiders have been a chic pick by the pundits at this early juncture to be one of the league’s most improved clubs in 2010. I don’t yet share that view. But if the Raiders are among the NFL surprises this season, Campbell is likely to garner the lion’s share of the credit.

Which as the steal of the offseason, at least in my view, he should.

Read the rest; it’s just as positive about Campbell’s arrival in Oakland, and makes me more hopeful than ever he can prove how productive he can be at that level when he’s not being constantly crapped on by the league’s most dysfunctional franchise that’s not, well, the Raiders.

But ah, to hell with the dysfunction: between Campbell, Walt McFadden, Darren McFadden (who I still can’t believe hasn’t torn the league apart), and their strange new role as plucky underdogs, the Raiders will be my second-favorite NFL team this year. (The ancient Falcons allegiance is still dying hard.) Weird. (HT to Will.)

Obvious troll is just as obvious as other troll. Do you want to know why I detest Schmaul Schmineschmaum, and detest with even greater destestitude the fact that he’s treated as a respected, nay, influential newspaper columnist by his media peers? Because his success gives license to other columnists to churn out dreck like this Mike Bianchi  … thing* (check footnote for a description), which if it appeared at Bleacher Report would be a perfect example of how godforsaken Bleacher Report is. If it appeared at a blog, it would brand its author as a Troll for Life. Instead, it’s under the hallowed auspices of the ink-and-paper Orlando Sentinel, and so–like Terrence Moore and Drew Sharpe and Schmineschmaum and all the other troll columnists before and alongside him–Bianchi will be continued to be treated by his peers as someone who always believes what he writes and would never stoop to slavish, drooling readership-pandering and making Weekly World News-level claims just for the attention. He writes for the newspaper, don’tcha know!

In a just world, Bianchi would be laughed off the pages of the Sentinel and be reduced to scribbling this sort of thing for the UCF message boards where it belongs. Instead, thanks to trailblazing bear-baiters like Schmineschmaum, he’ll probably get a pat on the back for the traffic. Oh well. This is the last time you’ll hear about him in this space, anyway.

Krootin’ addendum. Missed this one for yesterday’s post, so enjoy it here: Gabe Wright visited Georgia and Alabama recently and is still naming Auburn his leader:

Meanwhile, Wright had a decent enough time at Georgia but his mother did no[t].

“It didn’t go well as I planned,” Wright said. “It was kind of rough on my mom. It was hot and they had us on our feet a lot. She has diabetes and she didn’t feel too well. So we ended up leaving a little early on Friday.”

Conversely, Wright went to Alabama a couple of days later and he said that went much better.

“Alabama was just so organized,” he said. “They had a golf cart for us to ride around in and the whole day was planned out … I just came away feeling a lot better.”

Despite the impressive trip, Alabama was still not able to overtake Auburn on Wright’s list of favorites.

“Yes, Auburn’s still No. 1, definitely,” Wright said. “But Alabama really showed me something and they’re right up there.”

Wright said Georgia is now behind Alabama in a group that includes Tennessee and Clemson. He hopes to visit Clemson and Auburn again before the summer is out.

Sure, Alabama made up ground. But that Wright left saying Auburn was still “definitely” in the lead should tell you how far behind they began. Long, long way to go, but Auburn seems more securely in Wright’s pole position than ever.

Damn it feels good. The following video comes courtesy of frequent commenter and friend-of-the-blog AubOrange, and I’ll go ahead and offer the disclaimer that it’s not going to be everyone’s cup of tea. The audio–the Geto Boys‘ “Damn it Feels Good to be a Gangsta”–is extremely, extremely NSFW. It celebrates  the honor in a … how do I put this … certain kind of culture that a lot of Auburn fans would probably not enjoy seeing connected with images of their team. If you’re not a hip-hop fan or don’t have fond memories of the song’s (totally classic) use in Office Space, you’ll want to turn down the audio and take it on authority that the images of our rivals’ players aren’t there for flattery’s sake.

But oh man … if you do have fond memories of the song, or don’t mind various references to genitalia or drug conspiracies, this thing is a joy. Hell yes, Chris Todd is a gangster. Hell yes, it’s worth waiting for Chizik to appear perfectly on the “And now, a word from the President…” cue. Hell yes, much as I respect his decision, we need the smack directed in Lattimore’s direction. Hell yes, we need the classic clips. Enjoy, maybe:

(Hey, someone else you know did:

My kingdom for a quarterback that wasn’t Evil sometimes. Check out the 2007 and 2008 SEC seasons, now in hoops-style “aerials” form, courtesy of TSK. If you want vivid visual evidence of 1. how phenomenal Muschamp’s last defense on the Plains was 2. why Al Borges was let go, be sure to check the 2007 plots. (You can see 2009’s, too, but it’s pretty much what you’d expect.)

Etc. As first noticed by Jeremy, that’s none other than the intrepid Orspencerson Shwallindle taking a cellphone photo of Aairon Savage in his Media Days finery …

*Bianchi claims not just that UCF should replace Vanderbilt in the SEC, but that the injustice of Vandy’s inclusion over UCF is equivalent to forcing blacks to ride in the back of city buses or not allowing women to vote. Seriously.