Quotes from beyond the Interwebs. Enjoyable interview with Michael Dyer available here from the weekly Auburn Villager, touching on Malzahn’s early recruitment of him, when he made his decision on Auburn, etc. The story cuts off mid-article, but fortunately Jeremy has transcribed a key quote regarding his relationship to Fannin for us:

“Mario has been one of the main guys I look up to here,” Dyer said. “We tell each other every day that we don’t care. We don’t care who starts, who gets the most carries, any of that. We’re both here to help Auburn win. He’s been looking out for me ever since I got here. I really appreciate that. I think I could go to him about anything. Mario’s a pretty cool dude.”

Sounds awesome. I can’t really believe Fannin would be OK with losing the starting job, even in the event of a huge season for the team, but still … sounds awesome.

Another interesting tidbit, if you haven’t heard it before: Dyer wears the number 5 as a tribute to his older brother Jonathan, who was 5 when their father passed away in a car crash.

Now, just because any excuse is a good excuse to watch Dyer highlights:

BlAUgosphere. Firstly, if you haven’t seen the Auburner’s most recent video creations, see them now. Now. I don’t know why the Gus Malzahn offense and Meat Loaf seem to go together so well, but they do. 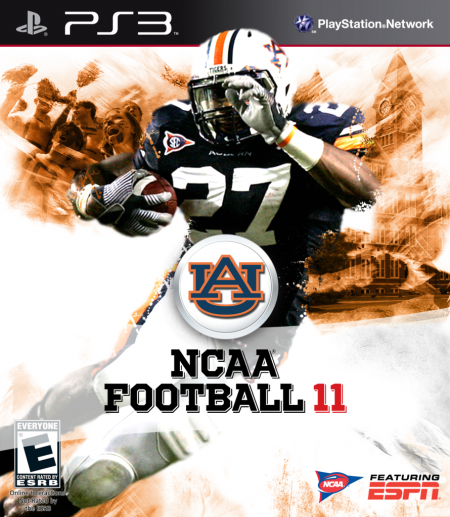 The Samford Hall on the right is an incredibly sweet touch, no? Kevin’s got a full-size version you can print out for your actual NCAA ’11 box there.

Elsewhere, Jay Coulter lists his most memorable Auburn moments. It’s a hell of a list. And the new-and-improved Joe Auburn is up-and-running with the usual restaurant reviews, Auburn alum info, and football shenanigans.

Even they hate it. Earlier this week I argued, again, that unless you have close geographical ties to Mardi Gras, you’d better not have the color purple involved prominently in your football uniform. As it turns out, even Clemson fans agree:

Well, your boy Ken Hatfield decided it would be a good idea to use orange pants on the road all the time and, in 1991 against NC State, to bust out the purple shirt in a win over the Wolfpack (he chose to get his ass handed to him against Cal in Orlando in purple jerseys also).  We did not see the purple in Clemson for another decade and our biggest uniform concern was the blatant disregard for the orange pants tradition.

Then comes brother Tom, introducing all sorts of uniform combinations.  Purple on white, orange on purple, purple on purple, white on purple.  Nothing but ridiculous and almost like spitting in the face of Clemson tradition.

Tom came out and spewed some garbage along the lines of the players like purple and want to express themselves.  That is complete crap, as no one should be able to look like such in public or on national TV.  Newsflash Tom:  I like rocking sweatpants and a T-Shirt, but don’t leave home or go to work in that gear because I would look like a fool.

I don’t have anything else to add other than: hahahahahahaha. (HT: MGo.)

Etc. The logical endpoint of the “Don’t blame me …” bumper sticker … JRS on The Decision: “Also ESPN has truly outdone themselves this time. I like to think they could never top this bulls**t…and yet I f*****g know they can.” Pardon the asterisks, but that’s exactly how I feel … Auburn > Alabama in the Aughts, according to Steele … “Catching excellence“? Try washing your hands sometime, Western Kentucky, geez.

And finally, soccer. With a little bit of football. A big congratulations to readers P. Edwards and B. Berry whose selection of Spain helped them to the No. 2 and No. 3 spots in the first-ever TWER World Cup pool. As for who came in top spot, well, modesty prevents me from HA HA HA SUCK IT, LOSERS!! I’M NUMBER 1!! I’M NUMBER 1!!

As for the final, despite the win in the pool I was disappointed my Dutch lost, but really, even more disappointed that van Marwijk’s tactics of brutality destroyed decades of soccer goodwill in the space of just 45 minutes. Until they prove otherwise, the Dutch are just another band of thugs that happen to have a few brilliant players like Sneijder and Robben. I think the Dutch should have received more credit in the aftermath for their positive start to the second half and mostly offensive-minded substitutions–they were the only team other than Chile to make even a half-hearted attempt to play straight-up against Spain instead of bunker-ball–but no team that puts butchers like De Jong and van Bommel on the field is going to get the benefit of anyone’s doubt, and frankly wouldn’t deserve it.

One last thing before any and all mentions of non-Auburn soccer are banished from this site for at least the following fiscal year: Spencer’s suggestion that soccer-inspired on-field advertising should be used to eliminate the occasional commercial break in (American) football? Doesn’t work for the college game, since I know I and a ton of my fellow fans would find the idea of Pat Dye Field turned into a billboard repellent, and I have no doubt you’d find the same response from Wolverine fans about Michigan Stadium, Dawg fans about the hedges, etc.

However: you know how during baseball games they have the blank panels on the walls behind home plate that networks will digitally project ads onto? Ads that you don’t see at the game, because all you see is a blank panel? Could those work? Let’s say ESPN just laid down some big strips of black plastic down either sideline, maybe some of those panels along the walls behind each end zone, and projected ads onto them for the viewers at home. I know they’d be unsightly, but would they be so unsightly that they wouldn’t be worth a few less commercial breaks a game? So we’d never have to go kickoff-commercial-kickoff again? So we could actually, finally play a televised game of college football that lasts less than three hours? I don’t know. They might be. But it also might be worth finding out.