Ca$h Rules Everything Around Me. So here’s this Fanhouse report on football spending you may have seen by now where Auburn has spent more on football–$28.8 million–than any other school in the SEC and more than all but one school–Ohio St.–in the country for the 2008-2009 school year. Gee, how do you think that fact will be received?:

Besides Ohio State, Auburn and Rutgers also had the luxury of playing every game in the past five seasons – the time frame used in FanHouse’s study – against opponents that spent less money than the Tigers and Scarlet Knights.

They say money can’t buy happiness, but spending more money than your opponent does nearly guarantee a winning record on the gridiron.

It’s a little fuzzy where the numbers–compiled by the “U.S. Department of Education’s Equity in Athletics”–are coming from exactly, but I think it’s a safe guess that they’re including the massive outlay Auburn spent in dismissing its old coaching staff and hiring a new one. So if you want to blame someone for this little glimmer of embarrassment, who should you direct your ire towards? Tony Franklin. As always.

(On the positive side, no one can accuse Auburn of short-changing its football program, can they?)(HT: Blutarsky.)

Football? For realsies? Those of you in truly desperate need of a gridiron fix and who get the NFL Network are in luck: tonight at 7/6 central the NFLN will air the CFL season-opener between the Montreal Alouettes and Saskatchewan Roughriders.

Football-type substance still not enough to get you to turn in? You’ll also have the chance to see two different Auburn alums in action–Damon Duval is back as the Alouettes’ long-time kicker and the Roughriders recently signed Prechae Rodriguez. Just feel like you’d want to know.

Draft talk? Why not: the SBNation NFL draft blog has a rundown of players they’re keeping an eye on out of the SEC West. Josh Bynes and Lee Ziemba get short write-ups with Zac Etheridge and Mario Fannin appearing in the “other seniors to watch” section. Cool to see them get some third-party recognition, particularly Bynes, who I’ve felt for a while now was a slightly better LB than running mate Craig Stevens despite what seems to be a little bit more acclamation for the latter. Too bad the misinformed “Ziemba gets called for holding” meme makes an appearance. (HT: RBR.)

If you’re looking for a darkhorse contender to push the Crimson Tide, the Razorbacks should be a serious threat with quarterback Ryan Mallett. And no coach in the SEC knows offense and how to exploit a defense better than the Razorbacks’ Bobby Petrino. You say Auburn’s Gus Malzahn? Not close.

(As an aside, Hollis is writing a wrap to the News’s SEC preview, where the league’s SIDs voted LSU and Arkansas into a second-place tie in the West. Good.)

Posterized. The Wiz has begun his annual team poster countdown with Auburn. Behold: 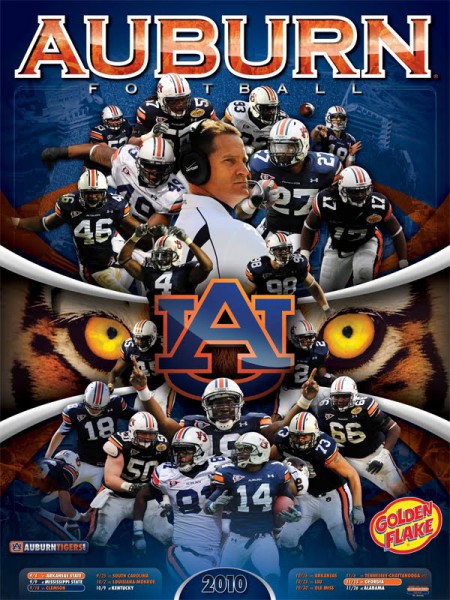 A tad on the busy side for my taste, but still fun to see, well, pretty much every member of the senior class get their due.

Do we care? I don’t think we care, do we? 7 of Auburns’ 12 opponents this season will play an FCS team the week before. Only five of them count, though, since UL-Monroe and UT-Chattanooga could spend the Saturday before being visited by Zeus and it wouldn’t matter. And we can’t complain about Georgia playing Idaho State the week before since we’re playing the Mocs ourselves, or ‘Bama playing Georgia St. when we’re on our bye. So, three weeks in which an opponent plays a I-AA team the week before–‘Bama’s whining about their schedule is nauseating, but griping about this would make them look positively reserved. It’s no biggie.

Etc. Why is seeing people make fun of Lane Kiffin still so satisfying? … Cam Newton gets name-dropped by Stewart Mandel as an “under-the-radar possibility” for the Heisman … 61 Tigers made the spring SEC academic honor roll, including nine baseball players; pretty cool that one of them was Hunter Morris, who must have known he was on his way to the big leagues shortly anyway.