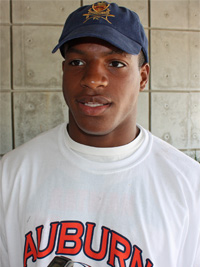 Leadin’. Despite some setbacks in the running back chase (more on which in a second), overall Auburn’s recruiting glass remains way more than half full after having a couple of top-notch recruits declare the Tigers their leader over the weekend.

One was Tucker (Ga.) linebacker Justin Garrett, who’s taken a number of visits over the summer has really, really liked what he’s seen:

“My parents and I went to Auburn, we had fun,” Garrett said. “Auburn is my leader, they are pretty far out in front” …

The 6-foot-2, 185-pound linebacker from Georgia had already made three trips to Auburn before, but Saturday was the first trip to Auburn for Garrett’s parents. After a full campus tour, they seemed as impressed with Auburn as Garrett according to him.

“They liked it a lot, they thought it was amazing,” Garrett said. “They loved the academics, the weight room, the coaching staff, the buildings, everything.”

Garrett mentioned that he’d gotten plenty of one-on-one time with Roof, who sees him as a weakside ‘backer, his position in high school. He’s a consensus three-star to the gurus, but his offer sheet doesn’t seem to match that assessment: Alabama, Georgia, Florida St., Clemson, Tennessee, etc. With one prototypical MLB already in the class in Landrum, adding a proto-WLB in Garrett with those kinds of offers would be a nice, nice pickup … and with Garett himself calling Auburn a “pretty heavy favorite” (and planning a decision before the start of his season), it seems Auburn will pick him up sooner rather than later.

Louisiana offensive lineman Greg Robinson would, of course, be an even bigger pickup–what with him being top-20 player overall at Rivals and a consensus four-star. He’s also going to be a much harder pickup to come by, what with hailing from the same LSU-mad town and high school, Thibodaux, that Trovon Reed all but had to sneak out of “Great Escape”-style to make it to the Plains.

But Robinson is apparently seriously considering making the same kind of escape: he told the guru reporters that Auburn now has a slim lead over LSU. It’s easy to say that now, of course, coming immediately after a long visit to the Plains, but it’s worth remembering that 1. Robinson may not want to divulge exactly how happy he was at Auburn, since his coaches and community won’t be thrilled about it 2. Auburn has seemed to steadily make up ground on LSU for a while now, and the consensus is that the longer Robinson goes without pledging to the Bayou Bengals, the better it is for Chizik and Co.

So: it may be vastly premature to call Auburn the favorites here. But the Tigers, at the least, do have a serious shot at pulling Robinson out of Thibodaux, just as they did Reed last year. (The best part about this would be having Robinson at Auburn. But the second-best part would be Dennis Lorio’s head exploding as Auburn made off with the second Thibodaux stud in two years.)

RB Watch has bad news. We’ve made the note a couple of times before that running back is actually a position of some need in this class, and that Auburn would be looking for two or even three backs to sign. Unfortunately, two of Auburn’s prime targets delivered some less-than-encouraging statements this week. First up, Mike Blakely:

“Florida is my No. 1, no doubt,” Blakely said moments after Friday Night Lights ended Friday at Florida Field …

While Auburn, which he recently visited, and South Carolina remain schools he plans to take officials to this fall, Blakely made it clear both have their work cut out.

“If (the Gators) run the ball and win games, I’m here,” Blakely said.

As the article itself points out, Blakely hasn’t had much consistency with his leaders over the past few weeks, so Auburn’s still very much in the hunt here, particularly since Blakely’s also said he won’t make a final decision any time soon. But the buzz on Blakely has had Florida ascending for most of the summer and Auburn descending since the bounce from Big Cat, so there’s a ton of work to do here.

Things are probably even more dire with Dee Hart, who told the Orlando Sentinel that he’s dropped Auburn entirely and will be deciding between Michigan and Alabama. (The consensus seems to be that Hart will stick with the Wolverines, who feature good friend Ricardo Miller and have been his leaders or co-leaders since the very beginning of the process.) Why?

Hart cited Auburn’s interest in a pair of other running backs for his reasoning.

That’s it? Auburn’s interest in other backs? The optimistic Auburn fan will say that there must be a lot more there than just interest for Hart to bail–i.e. that those two backs may be on the verge of committing–and that may be true. The Tigers could also get back in the race, you’d have to think, if the wheels come off for Rodriguez this fall and Michigan makes a change.*

But the bottom line is that Hart is an excellent prospect at a position of need who Chizik and Co. have been recruiting and recruiting hard for months, and now he says he’s not even looking at Auburn. If the Tigers aren’t going to land either Hart or Blakely, their top-level options (at least according to the gurus) become fairly limited–Quan Bray as a speed merchant, Rodney Coe or maybe Buck Allen as the ground-pounder, and that seems to be about it. We’ll see.

About those sleepers. You wouldn’t expect him to say anything different, but the position coach of new mystery-man corner commitment Devin Gaulden thinks Auburn has themselves a steal:

“I played for the University of Miami, and I told him when we went down there for a camp, ‘you can play here’,” Wilson said. “I said you can play here and do anything else anyone else is doing. He has that kind of potential, it’s just a matter of how high he wants to go. He’s got a lot of natural god given gifts, he’s very explosive, he’s got the quickness, and he’ll come up and hit you. He can be as good as he wants to be” …

The way things are today, there’s a lot of people that go out and publicize these kids, and sometimes kids fall through the cracks. Devin doesn’t have a lot of film, he doesn’t have a lot of stats backing him up, but he’s a tremendous player. The people making the decisions that know, and that have seen Devin play, know he has a tremendous amount of potential. He may not be well known now, but he will be in time.”

FWIW. As for recent camp commit Jaylon Denson, ESPN got a look at him at a national 7-on-7 tourney at Denson’s own Hoover High, and had this to say:

Recent Auburn commit Jaylon Denson (Birmingham, Ala./Hoover) is a sleeper on the recruiting trail and a potential weapon for the Tigers. While he has experience as an inline blocker, he has taken most of his reps at wideout in the tournament, which allowed us to evaluate his potential at that position in college. He has prototypical receiver size with his tall, lengthy frame and wingspan. He is fluid for having a 6-foot-3 frame, and displayed smooth footwork and movement skills. His hands and his ability to extend away from his body to pluck the ball may be his best attribute. Denson also has the stride to stretch the field vertically and get corners on their toes, but we do question his top-end speed and ability to separate at the next level. His route running needs some polish, as well. His upper body is well built, but he’s narrow through his hips and lower body, making a full-time move to tight end unlikely, at least to start his career. Regardless, Denson’s combination of size and athleticism is very impressive. He has all the tools to develop into a versatile H-back type, if used creatively in Gus Malzahn’s offense.

Man, too bad Malzahn’s not the creative type, huh? (I’m not seeing the H-back thing the way Malzahn’s used the position to date–I mean, Denson’s 6’3″–but whatever.) Rivals also had nice things to say about Denson’s performance in the tournament.

Even more CB help, on its way? By now it’s all but a foregone conclusion that Auburn will pick up a commitment from Jonathan Rose on August 1 (assuming he sticks to that date), but the boys at AuburnEagle are reporting that Auburn might also soon get a pledge from Fort Lauderdale defensive back Marcus Roberson, who declared Auburn his leader last week. ESPN and Scout don’t think much of Roberson, but Rivals calls him the No. 5 CB and No. 105 player overall, and the offer sheet agrees with them: Florida, Georgia, LSU, Notre Dame, Miami, a bunch more besides. A commitment would be huge.

Etc. Thomas O’Reilly’s commitment to Auburn remains firm, not that I think anyone expected to hear otherwise … ESPN’s Jamie Newberg reports that Tampa-based four-star defensive end Anthony Chickillo has picked up an Auburn offer after a recent visit; he says Miami has a tentative lead.

*I wouldn’t expect it, though. Michigan’s administration has a loooooong track record of patience with their head coaches, and RichRod’s spread-friendly recruits would be a terrible fit for a lot of other offensive systems; starting over would mean another could of years in the wilderness, and I think Michigan’s new A.D. is smart enough to know it. It won’t matter if RichRod can’t get to a bowl game–they’ll have to can him–but he’s got enough of a team this year that the Wolverines should get there.