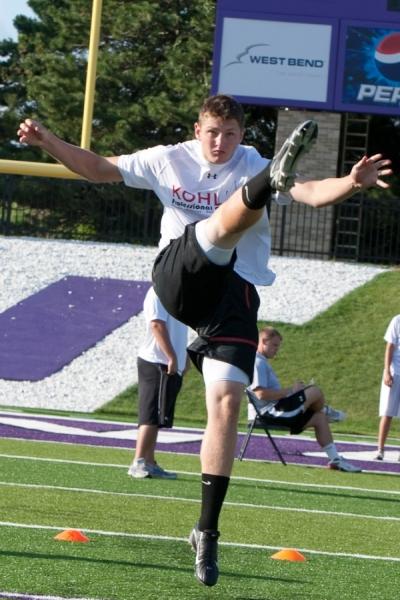 The recruitment of punter Steven Clark, at least as far as we know, went about as straightforward as these things can. Auburn decided they wanted a punter in the 2010 class. Jay Boulware found Clark and offered him a scholarship. Clark decided he liked Auburn better than his other offers and committed. The end.

It’s not much of a story. But it’ll still be one worth reading to your kids if Clark follows in the footsteps of greats like Terry Daniels and Kody Bliss (who was awesome in ’06, if you’ll recall), or even turns in one of those team MVP performances like Clinton Durst did in the ’08 win over Tennessee. Those guys mattered. And so may Clark.

Yup: our new punter is an inch shy of being six-and-a-half feet tall and weighs more than most of the defensive ends in his Auburn class. I don’t think “upside” is going to be a problem.

RECRUITNIK HOO-HA: The gurus are, by and large, always tough on kickers, and they’re even tougher on recruits who only punt. Rivals gave Clark two stars and a grade of 5.3, tied with Tunde Fariyike for the second-lowest in the class. (The lowest? Ladarious Phillips, at 5.2. I think they’ll live to regret that.) They placed him No. 20 on their kicker rankings, which include both punter and placekickers and only go to 25. (Now, why they feel the need to separate running backs from all-purpose backs and strongside ends from weakside ends but not punters from kickers–two skills far more different from each other than being a standard back and an “all-purpose” one–I don’t know.) Scout cares even less: two stars, no ranking.

But ESPN has a soft spot for specialists and rated Clark as a high-end three-star prospect, with a grade of 79 and the No. 4 kicker ranking in the class. Their evaluation:

Clark has the best frame for any kicker in the 2010 class. The 6-foot-6, 235-pounder has already received a couple of Division I offers and he has shown tremendous improvement since early spring. He won the Kohl’s National Scholarship Invitational Camp and was the most dominant punter. He has a great leg swing that does not cross over. His drop is consistent and his ability to turn over punt after punt is solid. He has been timed hitting punts in the five second range.

“The Missouri native is the No. 4 overall kicker and No. 2 rated punter. He is a punter with great size and a big leg. He had no offers at the end of July, but a very strong showing at a Kohl’s kicking camp put him on the map. He … has exciting upside as a punter.”

“It may not be easy to get excited about a kicking prospect, but Tigers fans should realize they landed a very talented punter with nice upside and the tools to be a draftable punter.”

In conclusion: upside. Clark’s other offers were Purdue and Iowa, but who cares.

LINKS OF POTENTIAL INTEREST: For being a punter, Clark has a hell of a lot of film available. The ESPN evaluation includes some footage from that Kohl’s camp, if you’re an Insider subscriber. (If not, I’ll give you the short version: he punts it way high.) Mysterious YouTube user “stevenclark2010” has uploaded the following highlight package:

Clark has a page at the National Combine Series, basically a series of events for kickers to show their stuff for colleges. Clark rates five stars there (take that, Rivals!) and coach Louie Aguiar has this to say:

Very big athletic kid. Very quick leg. He plays Tight End and also plays basketball. Can really get a hold of the ball and continues to get consistent.

Here’s Clark’s page at the Kohl’s site. As mentioned, he finished as the top punter there, with “top hang times … consistently in the 4.8-5.0 range.” He comes in at No. 2 on their list of punters for the class of 2010, behind only Michigan’s Will Hagerup. The blurb there mentions his “tremendous improvement” since his previous camp as well as the usual compliments of his frame and “swing.” (Speaking of that previous camp, even there he recorded the best hang time. He also recorded best times and best distances at camps at Iowa and Kansas.)

We’ve mentioned that Clark pulled extra duty for Park Hill as a defensive end and tight end, but he also played basketball–picture here–and threw the discus. From what I can tell he may not have been a standout in either, exactly, but still, there’s some athletic chops there.

WHAT CONCLUSIONS WE CAN DRAW, IF ANY: It’s sort of funny how unexcited fans get over special teams commitments, despite the fact that in some ways, they’re bigger deals than many of the “sleeper” prospects at other positions. The, say, sixth or seventh offensive lineman in a class has relatively slim odds to ever see the field on more than special odds; on the other hand, unless another Clinton Durst walks on from nowhere or he totally washes out, we know Clark is going to be Auburn’s starting punter in 2011. He’s got to be good, or else.

Of course, that’s not to overlook a couple of issues with kickers, namely, that they’re notoriously hard to project, even for coaches and gurus at the highest level; the last 10 Ray Guy Award winners include punters from places like Baylor, Wake Forest, Purdue, Colorado. And then there’s the fact that even if you wind up with one of the best punters in the country, the impact–while probably underrated–still just isn’t the same as the impact of having one of the best corners, linemen, wideouts, etc. in the country.

So I’ll forgive anyone who skipped this post because it was only the one about the punter. But what they’re missing is that it’s quite possible Auburn did wind up with one of the best punters in the country. By all the accounts we have, Clark was 1. good 2. getting better in a hurry 3. gifted with a higher ceiling than virtually any of his peers. Map that kind of trajectory on a graph, one where he even gets the bonus of a redshirt year behind Shoemaker, and you’re looking at a heck of a four-year career.

Maybe it won’t work out that way. But if you’re going to offer a kicker, better make it one with that kind of potential, right?