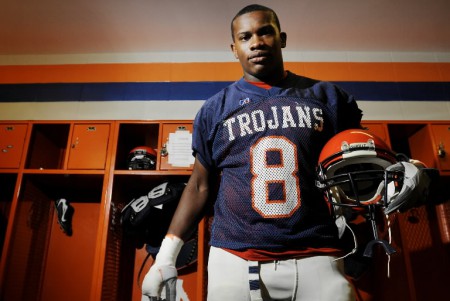 Hey, remember Jawara White? He committed way back in early June of 2009. He watched as Auburn’s class piled to the brim with four-stars and high-profile out-of-state thefts. He even sank to the back of the hype pack among his fellow linebackers–LaDarius Owens was the physical freak with the high-levle gugur approval, Jake Holland blew up at Pelham all season long, even Jessel Curry played in a state championship game, signed early, and got good notices in the spring. So maybe you forgot about White.

So the newspaper folks like him, at least. Also, 17 tackles-for-loss is a friendly number, no?

Also also, note that White’s ticketed for the strong side–at 6’2″, 235 (up from previous listings at 220?), and with “17 TFLs”-type aggressiveness, he won’t see the middle or weakside.

RECRUITNIK HOO-HA: White didn’t quite blow the gurus away, but they all agreed that he was, at the least, a well-above-average prospect. Rivals gave him three stars but a 5.7 grade and the No. 23 spot on their OLB rankings–the very first player on the list not to receive a fourth star. (The same goes on the Alabama list, where White finished No. 14.) It was a similar story at Scout, where White ranked no. 30 on a list where the first 25 all got four stars. Scout’s Andrew Bone:

White starred on both sides of the ball throughout his high school career. He is a terrific athlete who has a lot of speed to go with size. He can run sideline-to-sideline and also very good in pass coverage.

ESPN goes that extra step, giving White a grade of 79 and naming him a four-star player. Their evaluation:

White is a very active outside linebacker with great size and overall physical tools for a program to mold. Has an impressive frame with good bulk, length and the body structure to continue adding size … Runs well and flashes good athleticism despite being a bit straight-lined. Displays good range on both run and pass support but his short-area burst, power and overall tools may be his best attribute. Closes quickly in space on the football and is difficult to outflank to the perimeter …  Snaps back blockers with his good short-area power and upper-body strength. Plays with good overall leverage but does need to play with consistent sink in his hips … Far from just a physically superior defender, this guy can turn and get depth in coverage. Shows good mobility mirroring, vertical closing speed blanketing his underneath zone and ball skills. While very disruptive and difficult to block off the edge, he is a much better vertical attacker than lateral. We question his ability to slip fluidly under the cutoff block and pursue laterally through the wash … If he can continue to physically develop he may be an ideal fit for a 3-4 scheme with his experience and comfortable level playing on the edge. Good under the radar prospect with a lot of upside and tools to mold.

ESPN bumped him up all the way to No. 17 on their OLB rankings. Their “more vertical than lateral” assessment confirms what we knew from White’s size, though: he’s going to have to play on the strong side, or as a 3-4 OLB.

White had an odd set of offers: two high-profile ones in Alabama (everyone say it with me: “they didn’t want him”) and Florida St., but then Arkansas, Kentucky, and Ole Miss were the only other SEC offers before you get to UAB and Troy and the like. His relatively early commitment might have short-circuited a few more offers, but overall, it fits with his guru profile: good, not quite elite.

Sorry, folks, nothing embeddable. But the AUfficial site does have some film for you.

The 6-foot-2, 225-pound White is Charles Henderson’s all-time leading receiver. He’s fast enough to anchor the school’s state 5A championship relay team. He’s good enough to elicit an offer to play receiver at Troy, which plays a fly route up the street at Movie Gallery Stadium.

Auburn likes White’s open-field zip. But Auburn likes even more what happens when he uses that speed and arrives in a foul mood.

“Having him play both ways for us is the best thing for our team,” Charles Henderson defensive coordinator Tyrone Black said. “He’ll play inside linebacker for us this year, but he’s probably best as an outside linebacker. He’s a natural there” …

The offer from the hometown Trojans was “very tempting because, deep down, I believe I’m a better offensive player than I am a linebacker,” White said. “But my favorite position is safety. You’re playing in space, on an island, all by yourself.”

You get the point: White is fast, versatile, athletic. But you can get even more of the point by reading the whole profile (as you should). It’s also worth the reminder that it’s not like White has had the luxury of focusing all of his energies on linebacking just yet.

As for how White ended up at Auburn, it helps to have a leg up:

Tee hee. You can get a good look at both Fountain and White in his best Signing Day Auburn paraphernalia–seriously, it’s a sweet tie–in this gigantic photo from the Troy Messenger. The Messenger also wrote a story on White’s being named to the Alabama/Mississippi All-Star team, notable mostly for the terrific use of White’s nickname in the headline.

The OA-News’s Andrew Gribble got a first-hand look at White and left … sort of puzzled?

We’re no scouts, but we came away impressed—and just a little uncertain as to where White will fit in with the Tigers.

White played just about everywhere. We saw him take two plays off. He played a hybrid defensive end, slot receiver, tailback and returned kicks and punts. He finished with nine tackles, three receptions for 63 yards and five carries for 34 yards and a touchdown …

White is certainly a great high school player, or “fantastic” as Tallassee coach Rodney Dollar called him. But we’re just not sure where he’ll be this time next year. If he’s playing defensive end, White will certainly need to bulk up. Though we appreciate the athleticism, your defensive end shouldn’t be returning punts and kicks. The tailback thing was fun to watch, but his speed simply isn’t there for it to translate at the college level. The same goes for wide receiver, though it seems he could be an enticing option as a tight end. The hands are definitely there for that.

Uh … what about, you know, outside linebacker? If White’s as “fantastic” as Gribble agrees he is, he’ll find a place somewhere. Somewhere abbreviated OLB.

Two more tidbits: White finished No. 13 in Bone’s postseason list of Alabama’s top 50, and Jay Tate offers that White can be “an outspoken element who doesn’t mind taking command” but also played “flat-footed” during his senior year.

WHAT CONCLUSIONS WE CAN DRAW, IF ANY: White should be an excellent college football player. He’s big, he’s fast, he’s football-aware enough to play eight different positions, he’ll be working under a coach in Roof who can put those gifts to plenty of use.

The only question: if Auburn doesn’t make a major move towards the 3-4, will he find a spot where he can? LaDarius Owens is also very big and very fast, by most accounts even more a physical specimen than White. Owens also seems ticketed for the strongside LB position in the 4-3; can White beat him out? Will one of them be moved? Will Roof just say the hell with it and play 3-4, where both could be terrors off the edge?

Those are the only questions, and they’re not really about White; they’re just about finding him a home. I think Auburn’s coaches can manage it. It says here White will be in the mix for a starting position as soon as next season, and should be a major contributor before his time on the Plains is up.

Sorry, this is all the WBE content for today; got to catch up on some Real Life things after being on the road midweek, and the gut-wrenching happenings at my other alma mater–where a close personal friend has been fired and entire chunks of the academic catalog are being erased–has had me distracted and unproductive all day. I know it’s been a light week on the posting front, so I’ll make it up to you with a couple of weekend pieces–check back tomorrow for a Media Days wrap. Until then.