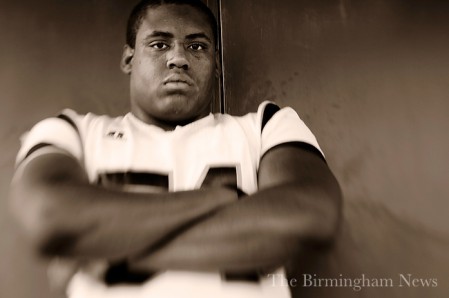 There’s not a ton to say about Chad Slade’s recruitment. Last summer his best offer was from Mississippi St., but Auburn needed offensive linemen, big ones, and Slade is a big (BIG) offensive lineman who’d performed well in camp. So they offered. And Slade accepted. Neat, tidy, simple.

It’s the way we wish it could be for all of Auburn’s recruits. It just doesn’t make for a riveting opening to profile posts, unfortunately.

HIGH SCHOOL: Ranked as the No. 34 player in Alabama by SuperPrep … Named to the All-Southeast Region team by PrepStar … Named the No. 38 prospect in Alabama by the Tuscaloosa News.

RECRUITNIK HOO-HA: Slade moved up in the gurus’ eyes a little bit from the time of his recruitment, when he was about as deep a sleeper as you’d find, but not enough to become something more than, well, a less-deep sleeper. Rivals didn’t include him in their guard rankings, giving him a low-end three-star rating of 5.5; Slade was one of only six non-kicker signees in Auburn’s class to rate at that level or lower*. Scout called him the No. 62 guard but did have this to say about him:

Slade shot up the charts since the beginning of his senior season. He is athletic for his size and very powerful. He is explosive off the line and continues to work on his footwork.

I’ll take it. ESPN handed Slade a grade of 75–again on the low end of the three-star range, again only seven Auburn signees rated that low–and offered this evaluation:

Slade presently plays offensive tackle; his size for the position at the major level of competition is more than adequate; his athleticism may be better suited for the guard spot. This player appears to be a little tight in the hips but displays good agility and nimble feet. At times too high coming out of his stance but does flashes quicks and explosiveness as a down blocker … His pass protection skills will need work; flashes good quick set and the ability to slide his feet while playing flat footed. Can mirror an opponent but will get caught up high and cross his feet; arm length is good but technique needs work … This is a guy who should not be limited to the guard box area; his athleticism will allow him to pull / trap and pop out in pass protection. Slade is not an immediate starter or early impact player at the BCS level of competition. We see him as a developmental prospect needing time and a red shirt year to fully develop his potential. Although he flashes an aggressive, tough attitude his ability to dominate an opponent must become more consistent.

So, just in case you were wondering about the “OL” designation from the Signing Day bio: he’s a guard. Has been from the day he committed. Just so we’re clear. Something else to remember when reading this evaluation is that it was written–like all of ESPN’s, save for the real high-profile guys–after his junior year. The strides that Scout mentions hadn’t been taken yet.

Still, Slade’s offer sheet doesn’t exactly disagree with ESPN’s take; Auburn and State were the only SEC schools to offer. UAB, Louisiana Tech, and Arkansas St. were his other suitors.

LINKS OF POTENTIAL INTEREST: So here I was thinking we’d be lucky to have any film on Slade–he is an offensive lineman at a low-profile metro-Birmingham football program, after all–and instead we’ve got an abundance: 8-and-a-half minutes’ worth here, another 8 minutes here. For reasons of both time constraints and the single strangest musical choice I may have ever heard in one of these things, though, you may want to watch this:

OK, so Slade doesn’t look particularly polished there, but it’s all from just one game, and there’s no denying this: dude, he’s huge. Like, massive.

“It is a big deal to me,” he said. “My cousin, Stacy Danley, went to Auburn as a running back. I just wanted to follow in his footsteps and go to Auburn too. It is a good place with a nice campus and I am glad to go there” …

“Chad Slade has inspired us,” said MHS Principal Dale Stripling. “We are really proud of him and know he is going to be great” …

“Both coaches have always wanted me to work hard and pushed me to step up to be a leader,” he said.

Slade holds a 3.2 grade point average and his plans include majoring in criminology at Auburn.

“It seems very interesting and something I have wanted to do for quite awhile,” he said.

Here’s to hoping Slade lives up the his cousin’s standard.

All that “nimble feet” talk isn’t just talk: Slade ran a sub-5.3 40-yard dash at a combine last May. While being, you know, ginormous. Also something to file away under “athleticism” is that Slade was a standout basketball player (being ginormous helps there, too) for both Moody and a Birmingham-area AAU team.

Andrew Bone, the same Scout-affiliated guru who write the blurb quoted above, slotted Slade in at No. 35 on his list of the state’s top 50:

Slade is a raw prospect who has only played on the offensive line for one season and has improved tremendously. He is very powerful and great at blocking in the second and third levels.

Slade is among Auburn’s most low-profile signees. He played for an average Class 5A program that isn’t known for churning out quality recruits. Slade is a large young man who simply overpowered most opponents in high school. He doesn’t seem particularly fast or skilled, but Auburn coaches place plenty of emphasis on effort. Slade is that guy. He works his first block and moves on to the second without hesitation. He focused on defensive line and basketball until his senior season, so his career along the offensive front is just getting started.

Not fast or skilled? Then how has he become a professional rubgy player, huh? Or maybe that’s a different Chad Slade.

WHAT CONCLUSIONS WE CAN DRAW, IF ANY: Well, I think it’s safe to assume Slade will redshirt; the similarly-profiled Andre Harris redshirted a year ago, and that with a substantially thinner line than Auburn will feature this season.

It’s also safe to assume Slade will have a real chance to contribute in the years following. His combination of size and relatively quick feet alone will see to that. It’s hard to see him making a leap into the starting lineup anytime soon with guys like Eric Mack, Ed Christian, John Sullen, and Thomas O’Reilly around, but if his work ethic lives up to its reputation, his raw gifts could certainly find him on the field as a junior or senior. He’s got tons of room to grow and the smarts (3.2 GPA is what we like out of our offensive lineman, isn’t it?) and effort to put that room to use–if you’re going to take a flyer to help fill out the depth chart, isn’t that the kind of flyer we’d want?

*The others, just in case you were wondering: the quarterback-turned-defensive back trio of Chris Davis, Ryan White, and Ryan Smith and the Signing Day sleeper duo of Tunde Fariyike and Ladarious Phillips.

Photo by the Birmingham News. You probably figured that out.