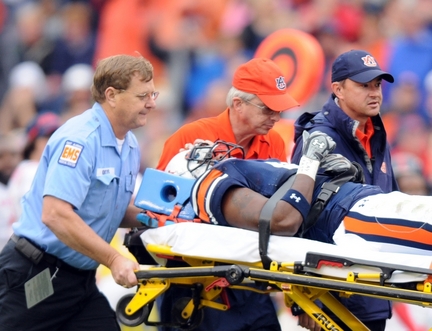 — The Zac Etheridge “can he play?” countdown has reached just four days. For his part, Etheridge is confident:

“It’s been a long road,” Etheridge said. “I know everybody is as anxious as I am.

“Everything feels great. I don’t have any numbness, tingling or anything. The next step is just for me to get cleared for the contact. I’m very confident I will be cleared.”

Personally, I’m not getting my hopes up, because it would hurt too much to have them dashed, especially by a doctor with such a swaggerific name as Dr. Swaid N. Swaid. But I’ll take the positive signs, sure will.

Jay Tate’s also got a post up about Etheridge; he’s also confident Etheridge will be cleared but wonders if he’ll be the same player. I’ll wait to cross Bridge A before worrying about Bridge B, myself.

— Speaking of health problems and hopefully inspiring comebacks, it sounds like Shon Coleman’s recovery is continuing with all due haste. News that goes beyond “great,” obviously.

— Gymnastics head coach Jeff Thompson has left Auburn for the same position at Penn State. I’m assuming PSU can offer greater gymnastics history and cachet and all that–Auburn didn’t have a whole lot, and what they did have, Thompson was largely responsible for–and certainly the competition won’t be quite as fierce in the Big Ten. Here’s to wishing Thompson the best of luck. But would it have killed him to say something nice about his tenure at Auburn on his way out the door? You were here 11 years, man.

— The Senator takes a look at Football Outsiders’ field-position rankings and finds out that, whaddya know, Auburn was fourth from bottom in the SEC last year. This will not be a surprise to anyone who hasn’t had their memories of our kickoff coverage and punt return units wiped Eternal Sunshine-style, though if you did, I don’t blame you.

— Look, all I’m sayin’ is, just remember this the next time you start to take anything written at CFN at all seriously. (Or at least, anything by their head writers, Fiutak, Zemek, those guys. They’re basically the poor man’s Stewart Mandel at this point. You do not want to be the poor man’s Mandel.)

— At first I wondered, you know, I know he’s Bobby Johnson and the sort of coach I’d like any hypothetical sons to play for, but July? Really? Even if you’re a burnt-out husk of a coach by this time, how do you reach that conclusion after what’s basically the cushiest two months out of a college football coach’s entire year? Shouldn’t his batteries be recharged?

And then I realized, Johnson’s probably wondering the same thing. If he got to mid-July and still felt at the end of his rope, it really was probably time to let go. Best of luck to him. I’m not sure anyone in the SEC did a better job in the past eight years than he did. Seriously.

Next for Vandy: they’ve got to go to the option after Caldwell limps through this season. Got to. Everything else has been tried. None of it’s worked. Not sure if you find a guy from Johnson’s staff, Niumatololo’s, Calhoun’s, Ellerson’s at Army, the head coach doin’ the option thing at Georgia Southern … but you gotta get one from somewhere.

— Auburn Arena photos! I can’t get enough, man. But maybe the most interesting note to come out of the media tour:

The name “Auburn Arena” is pretty much permanently emblazoned on everything, so that looks like the one they’re going with. But the Auburn spokesman said the school wouldn’t be adverse to a sponsor coming in at the last minute and snatching up naming rights …

Should we start a fund to call it TWER Arena? I’ve got 10 bucks.