Why am I showing you a picture of various U of Utah women’s soccer fans showing off their Ute soccer scarves? 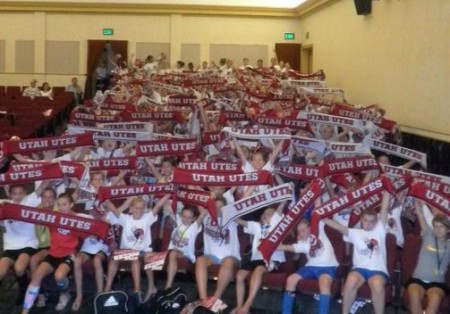 Because I want to tell whoever out there who might have the ear of the Auburn Fan Shop: if you make an Auburn soccer-style scarf, I will pay substantially more than its manufacturing cost to purchase it.

Why? Because while there’s a lot of things football could stand to steal from soccer, there’s not many more easily stolen or just about any cooler than a soccer scarf. Consider:

2. It’s a way to take your gameday outfit beyond the standard shirt/hat/tie pairing without having to resort to costumery*

3. No one else in college football is running with this idea; we’d have cred out the wazoo

4. Holding the scarf up during the alma mater would be a thousand times cooler (and cooler-looking) than a slow sway, or whatever.

Plus, they’re just stylish, and the design is cake. Just take this:

Replace that silly Utah logo with the best logo in college athletics, change the white-on-red to orange-on-blue and the red-on-white to blue-on-orange, outline everything in black, and we’re golden. If I really had to choose, I’d still take an Auburn hockey jersey first … but a soccer scarf would be a close, close second. Make it happen, people who have the capacity to make it to happen.

(One other thing: the reason for the photo above is that the Utah women’s soccer team is selling their scarves as a combination fashion accessory and season ticket. If Auburn wants to follow suit, despite the fact I will be unable to attend any matches this season, I will be buying a season ticket all the same.)

*Not that I have anything against Auburn-themed costumery, of course. I encourage it wholeheartedly. It’s just not for all of us.