It’s mid-July and apparently time-killin’ time for the Auburn beat writers, as both Jay Tate and Andy Bitter have embarked on that most time-honored of time-killin’ traditions: player countdowns. Or in Tate’s case, player/coach countdowns.

The reason this is a time-honored tradition is because they’re fun, create debate, allow us to discuss the roster without getting into the nuts and bolts of actual previewing (which has to be saved for later), etc. I’d toyed with the idea of doing one myself.

But since both Tate and Bitter are doing something along the “these guys are important” motif, I thought I’d go in a different direction … namely, naming the Auburn players I’m most invested in this season. I’m rooting and rooting hard for anyone who puts on an Auburn jersey, of course, but we’ve all got our favorites, right? We’ve all got players who we want to see succeed just that little bit more, whether for reasons of character, off-field issues, on-field disappointments, whatever. Maybe they’re not the most important players to the team. But in some ways, they’re the ones who are most important to us.

So I’m counting down the five guys I’m rooting for with that touch of extra gusto this fall. First up … 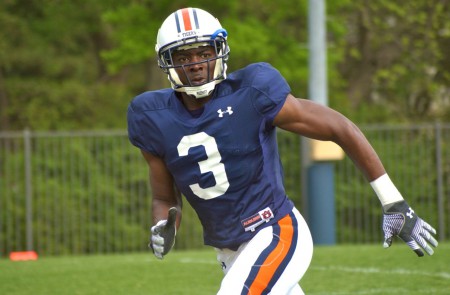 Even now, I still can’t believe he just came out and admitted it like this:

While LSU coach Les Miles did not comment specifically on the decision [uh … he kind of did–ed.], he confirmed that Benton, a previous commitment, wasn’t on Wednesday’s offer list.

“We made some hard-fast decision with Benton,” Miles told TigerBait.com.

This is a lifelong LSU fan, a kid who’d worked for two years to get his grades up, who’d stayed committed to LSU the entire time, even moved to Baton Rouge, and the night before signing for good–according to nearly every damn body, including his high school coach–has his scholarship yanked because the latest five-star wideout on the LSU radar (and his Dad) decide they want as many depth chart obstacles out of their way as possible.

That is one cruddy, cruddy deal, man. But unfortunately for Benton, his landing at Auburn maybe hasn’t been as soft as we’d have hoped for him. Thanks to his bountiful recruiting hype we expected him to claim a starting job from Day 1–hell, we didn’t even debate about it–and thought he’d have a good shot at ending the year as Auburn’s top receiver. That didn’t even come close to happening, as Benton caught just six balls (not even tops amongst the Auburn freshmen), struggled with both drops and his route-running, and rarely even saw the field against teams that weren’t Furman. Meanwhile, Chizik and Co. brought in a similarly-built, similar-style four-star All-American wideout in Antonio Goodwin for the class of 2010, not to mention two other highly-regarded receivers in Shaun Kitchens and Trovon Reed. Benton now faces a challenge not only to try and break upwards into the Zachery/Adams  rotation, but to keep from moving backwards behind Carr/Goodwin.

For a kid who must have envisioned putting his vast physical talents to work immediately and possibly moving on to an NFL payday in just a couple of years, this must have been a terrible disappointment. But if it ever impacted Benton’s work ethic or caused him to drop his head, we didn’t hear about it. Trooper Taylor made it a point to rave about him on multiple occasions, promising he’d set Auburn records, constantly praising his dedication, and as recently as this January, pegging him for a breakout season this year. Maybe Taylor fully believes Benton is on the verge of big things, maybe he’s just trying to keep Benton’s confidence up. Either way, Taylor clearly, desperately wants Benton to succeed, and after all he’s been through, can you blame him?

Of course, succeeding on the field is one thing. The question many tongue-wagging LSU fans posed was whether after all his academic troubles, Benton could hack it in the classroom. Consider that question emphatically answered:

Wide receivers coach Trooper Taylor says Benton’s time is coming on the field, but he’s already been a big winner in the classroom with a 3.0 GPA.

Benton, from Balstrop, La., signed with LSU twice and failed to qualify academically before finally qualifying at Auburn.

“Ask anybody in his hometown, and they probably wouldn’t have given a plug nickel for him to come in and do what he has done academically, socially and athletically,” Taylor said.

To stretch a familiar metaphor to its breaking point, some of the lemons life has handed Benton are ones he’s picked himself. But many were not, and regardless, he now appears to be doing his damnedest to make some lemonade out of what he’s got. After all of the academic struggles, the recruiting mishaps, the misplaced expectations, how nice would it be to see things finally turn around for Benton on the field as well as off?

It would be awfully, awfully nice. And if it turned around particularly the night of Oct. 23, when Miles’s Tigers visit Jordan-Hare? That would be nicest of all.

This series could have easily been 20 players long, really. It is Auburn we’re talking about, after all.

But in the interest of keeping things sane, I’m sticking with 5. I’ll go ahead and give you five more Tigers (in no particular order) who I’ll be saying a few bonus “War Eagle”‘s for:

Mario Fannin, Sr., RB. Coughed up his first chance at stardom by coughing up the ball left and right. After his seemingly endless sojourn at receiver and H-back, finally has his gilt-edged opportunity at tailback. Would love to see him shut up all the dolts out there who think the loss of Ben Tate is somehow going to cripple this offense.

Zach Clayton, Sr., DL. An Opelika kid who’s as orange-and-blue as they come, but was essentially robbed of what should have been a big junior year by injury. Probably too late for him to become a starter, but Clayton returning to the defensive line rotation and putting together a solid senior season would be both a great, Andrew McCain-like story and a huge help to the still-fragile Auburn d-line.

Travante Stallworth, Soph., WR. A thoughtful, underrated recruit who committed to the Tubby regime but stuck with Chizik and Co., the undersized Stallworth was nonetheless on his way towards becoming maybe the biggest immediate contributor of Auburn’s ’09 class of wideouts when he went down with a season-ending knee injury. It’ll be heartening to see him return to the rotation, if the knee allows.

Antoine Carter, Sr., DE. Like Fannin, another player who burst onto the scene only to fade back behind it as injuries and general ineffectiveness took their toll, but now has the chance to finally capitalize on his immense potential. And as with Fannin, it’ll be terrifically satisfying to see the “how are they going to replace Coleman?” doubters silenced.

One of Onterio McCalebb’s earliest memories is living in a trailer without electricity. He remembers moving to live with his grandmother. He talks of some tough times for his family.

“We had nothing,” McCalebb recalled.

It’s no wonder Onterio McCalebb sees football as a way out, and a way to help his mother and his family find a happier life.

“That’s why I work so hard and do what I can do to make it to the next level so my mom won’t have to live like that,” said Auburn’s newest and fastest running back.