Ed. note – Since we don’t play Southern Miss this season, I figure the news of Jimmy Buffett’s free Gulf-solidarity concert down in Gulf Shores is as good of an excuse as we’ll get to re-post from ye olde latitudes J.M.’s Sept. 2, 2008 piece — plus a few new photos — on the Head Parrot (Mobile, Pre-Flunk, Class of ’65). And it’s Summer. And I am searching for my lost salt-shaker, that’s no lie.

Last month, I went to see the movie “Gonzo: The Life and Work of Dr. Hunter S. Thompson” and was surprised to see Jimmy Buffett interviewed. “What? WHAT?!?” was my initial reaction.

I’m not a big fan of Jimmy Buffett’s generic beach rock. And I still have a hard time imagining Buffett hanging with one of my literary heroes: Hunter S. Thompson. But for full disclosure, I did go see Buffett perform in at the Starwood Amphitheater in Nashville in 1993, but I swear (please believe me!) it was because a girl that I liked in high school invited me to go with her and her friends. I hate to say it, but I had a great time.

Anyway, Jimmy Buffett often hung out with the Good Doctor Thompson in Key West and other tropical locations in the ’80s. They were friends. I still can’t figure out if it drags Thompson down or elevates Buffett.

But the movie got some wheels turning in my head, and I thought back to rumors at Auburn University where I heard that Jimmy Buffett attended and failed school.

I have been told by countless people that Jimmy Buffett attended Auburn University for a year. He was a busy man living here and there if you were to believe all the urban legends. I was told by a person that he lived in a hidden shack on Glenn Avenue. I was told by another that he lived in a shotgun house on Ford Court (an alleyway with five houses behind The Brick Oven Pizza Co. on Gay Street). Both were wrong.

But thanks to an exhaustive biography by Steve Eng entitled “Jimmy Buffett: The Main from Margaritaville Revealed,” I finally know the truth.

Jimmy Buffett’s first and only year at Auburn was in 1964. He decided to major in public relations/journalism. He was a Sigma Pi pledge.

Where did he live? Well, Steve Eng’s book finally cleared it up for me.

That fall Jimmy enrolled at AU and stayed in the Plainsman Apartments. Years later, the resident manager said that Jimmy “lived like a bum in his apartment. He was always smoking dope, always drinking beer, and never went to class. And always playing his guitar, late at night.”

When told that Jimmy Buffett was famous, the manager replied “Uh-uh. This guy was a bum.”

[Ed. note – a few years ago, I was given an impromptu, guerrilla tour of the grounds at a hidden antebellum home with a crazy name I can’t recall. It was kind of off Shug Jordan Pkwy. or something, buried but still bangin’. There was a shed in the back. “Jimmy Buffett used to squat there,” said my guide.]

It seems that Buffett wasn’t all that interested in class work either, devoting his time to other pursuits. A rumor that I heard and decided was also a myth actually is true according to Steve Eng’s book: Buffett got his start playing the guitar for real at Auburn.

Jimmy’s mother said that “Auburn is where [Jimmy] learned to play guitar,” which Jimmy confirmed: “Women are more attracted to guys with guitars than guys with typewriters.”
…
At a social event, all his fellow fraternity “pledge swaps” sat around and “scratched their asses” — but the girls all kept their distance, while haughtily straightening their brassieres. The only classmate to win their attention was Johnny Youngblood and he earned that with his guitar. He explained to Jimmy that all it took to entice a girl was just three chords. “Teach me,” pleaded Jimmy. “And that was the start of my professional career. For no other reason than to meet girls.” Three weeks later he was entertaining the girls with G, C and D.

Of course, he had already begun picking in high school, but he played enough at Auburn to change his college priorities. “He flunked out,” Jimmy’s father said beaming, but his mother amended: “He was on academic probation when he left.”

This still sounds like fiction to me and “Johnny Youngblood” is totally a made up name. (What a kick-ass name!) What is that guy doing now?

Also, I like to imagine Jimmy’s first few frat house performances got a similar reception:

So, it seems that Jimmy Buffett spent his year at Auburn just like the Plainsman Apartments manager described. Steve Eng dug up some review of a 1979 show from The Plainsman that adds a nice postscript to Jimmy’s college year.

Jimmy set the record straight in April 18, 1979, telling an Auburn concert crowd (dressed in Hawaiian shirts and straw hats) that “I left here with a 0.32 overall, and I haven’t been back since.” At, least he earned a nice, honorary, postgraduate headline from The Plainsman: “After Flunking Out in ’64, Buffett Gets High Marks From Audience.” Journalist Ford Risley said, “We can only hope, as Buffett said, that it will not be another 15 years until he returns to Auburn again.”

…
At least Jimmy Buffett’s legacy to Auburn is social, if not scholastic.

“I had flunked out of school earlier — Auburn — and I had been banished to Poplarville [Miss.] and gone to Pearl River [Junior College],” Jimmy said in 1989. “And I said, ‘Hell, I’m going to join the Navy or the Army, and get out of here. I’m useless.’ Just about that time, I started playing music … and it probably saved my life.” 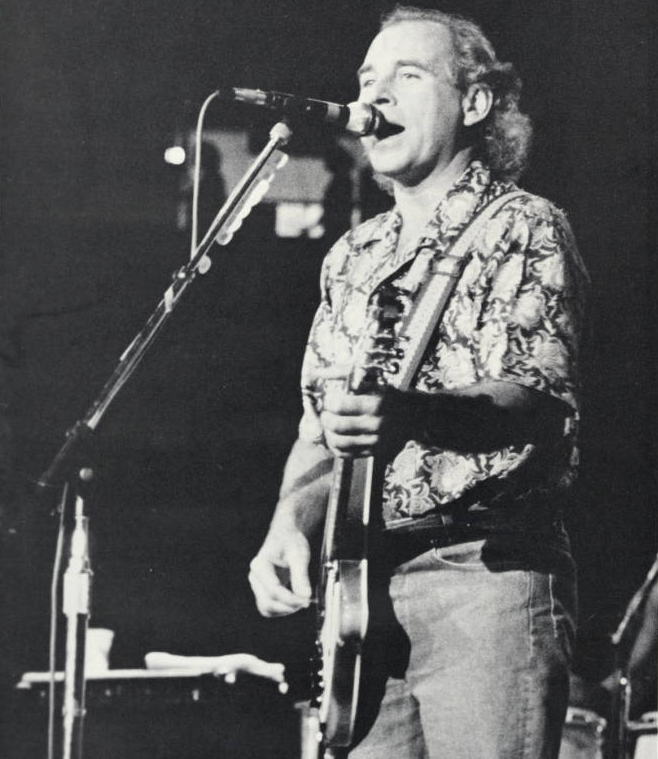 This Weekend: The Buffett Bowl?

Since it is the week of our matchup with the University of Southern Mississippi, I should mention that Jimmy Buffett did eventually graduate from there in 1969. I’ve held off posting this until this week because of that fact.

In Eng’s book, Buffett said he followed some friends and musicians to Hattiesburg in 1966 and formed a folk trio that wore “navy blue shirts and matching belts and ascots.”

“We played little fraternity things and coffee houses in Mississippi at this time.”

And supposedly his “Peanut Butter Conspiracy” song (1973) is about his time shoplifting in Hattiesburg while at school.

Eng also wrote this about Buffett’s time at Southern Miss:

Southern Miss’ best classroom contribution to his music career was poetry. He studied poetry “just for rhyme schemes and things like that,” he told dopezine interviewer Bob Anderson of High Times in 1976. “I’ve always been interested in poetry. If I ever studied anything in college that I retained, it was that. Poetry.”

If Southern Miss and Auburn played each other every year, imagine the possibilities for a “Buffett Bowl” or a tradition of playing for the Ol’ Rum Barrel.

But, sadly, the mayor of Margaritaville doesn’t seem to have much loyalty to the football programs of the two schools — he was or is a Bama fan. In a Tom Arnold sort of way, i.e. wishy-washy.

SI: Did you grow up rooting for a particular sports team?

Buffett: I was an Alabama fan and then I became a Florida fan later on. The rest of my family were Auburn fans so just for spite I just rooted for Alabama. Later on I became an LSU fan when I dated a girl from LSU. My allegiances were not cemented.
…
SI: How often do you come across athletes who are fans of yours?

Buffett: It happens a lot. Ken Stabler and I were friends from our high school days and still remain friends.

Stabler? The Snake? Say it ain’t so Jimmy!

That really takes the wind out of the sails doesn’t it?