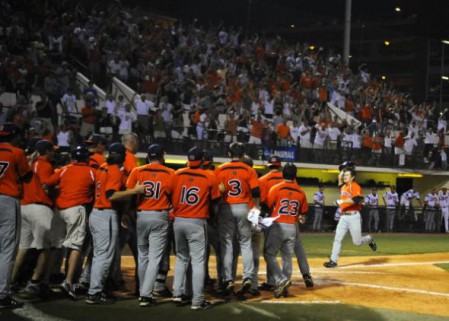 You don’t see it expressed too often. Not in polite Auburn company, anyway. But occasionally, you’ll see an Auburn fan respond to failure in a sport that isn’t football–and as we know, we’ve seen plenty of failure the last several years on the baseball diamond and basketball court–with a shrug. “It’s not football,” they’ll say. “Who really cares? How many days ’til kickoff, again?” The past few years, I’d almost come to have some level of sympathy for that position. Sure, it would have been nice to have a winning hoops teams and a winning baseball team. But we were doing OK without them … right?

Then there’s a night like last night, a moment like Creede Simpson’s home run, and we’re reminded: no, it’s not OK. It’s not all right for Auburn to stay uncompetitive, in whatever sport. There’s too much joy, too much thrill, too much memory, too much of everything encapsulated in that home run to just forsake them. It shouldn’t be just the guys in shoulder pads who have an opportunity to earn handshakes and congratulations for a lifetime, a chance to be 67 and have a stranger tell you “I was there.”

Creede Simpson deserved to have that chance, too, and if he took advantage of it in the grandest style possible, we shouldn’t forget that it’s been an entire season of phenomenal baseball (and phenomenal baseball coaching by John Pawlowski) that got him and his team to that point. It’s been the kind of season that we didn’t realize how badly we’d missed until we were in the middle of it … or maybe not even until last night, when Simpson connected and Plainsman Park shook and we all remembered that failure is never something to be shrugged at.  Auburn wasn’t just missing out on SEC tournament appearances and NCAA brackets and numbers in the win-loss column; they were missing out on Creede Simpson keeping the season alive with a two-out home run in the ninth on a 1-2 pitch.

Here’s to hoping last night was just the start of a long period of not missing out when it comes to Auburn baseball.

— Admittedly, I’m relying on other people’s descriptions of the moment, since I was neither there in person (obviously) nor watching on TV (no such thing this time) nor even listening on the radio. I was following on Livetracker–sigh–but even so, you’d be surprised how freaking happy you can be watching the little cartoon baseball fly over the cartoon wall and the little cartoon scoreboard light up with HOME RUN!

Nonetheless, all those of you who were there: I was and remain deeply, deeply envious.

[Ed. note — those who didn’t see it need be envious no longer]

— Auburn’s out of starters, but I might think the advantage swings to the home Tigers anyway at this point, since neither team is exactly going to be putting a lights-out guy on the hill in the first. The deep bullpens are going to figure heavily and there should be a lot of scoring. Deep bullpens are typically the kinds of pitchers Auburn’s lineup has chewed up and spit out, and the Tigers have always been very comfortable in high-scoring games. Like yesterday’s, for instance.

Then again, I thought the exact same thing before the Ole Miss meeting in Hoover, and we all remember how that turned out … and, of course, the Rebels had vastly less firepower than Clemson does.

— Maybe the Pythag was a hair too bullish on Auburn–our Tigers were one of only three top seeds to slip into the loser’s bracket (Coastal Carolina and Cal-State Fullerton were the others), and very nearly the only one to fail to make it to a championship game–but at least it was right about Ole Miss. The Rebels were one of only two SEC teams to be eliminated before the championship round, and at least LSU went out to a long-time baseball power in UC-Irvine. Ole Miss was eliminated by St. John’s, which you may know as 1. a Big East school 2. located in New York City.