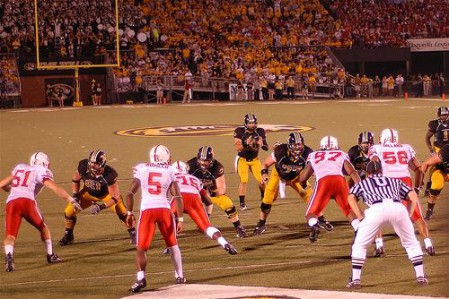 On some level, this is all thrilling. The landscape of college football as we have known it–virtually since its inception in some cases–is being seismically upheaved. The USC denouement grabbed a lot of headlines yesterday, but that story’s importance pales in comparison to the conference expansion rush. USC’s sanctions will seriously affect one team and one conference for, oh, about 10 years or so. Conference realignment will affect all teams, all conferences, from this point to all points forward. To watch it happen now, right before us, with its breathtaking Oklahoma land grab speed, is to inevitably have our college football fans’ pulses pounding. Our collective heart can’t help but race.

But I wouldn’t say I’m excited. I am the opposite of excited, in fact. I am sad. More than that: I am mournful.

Because this is college football. I can’t imagine a sport where tradition is–or maybe “has been”–more important, where it carries (“carried”?) more weight. It’s a sport played by amateurs, each of which don their team’s uniform for four years at the most. Our connection to our teams may start with the school we attended (or grew up near) and aided by the players who take the field, but it’s sustained by tradition: the uniforms, the cheers, the joy of shared history, the unique plural-s traditions, and perhaps most importantly, the rivalries. Everything else makes being a fan better. The burden of 75, 85, 100, 100-plus meetings between two teams carried on the pads of the players makes the game better.

I may be wrong, but it’s my belief that during my lifetime–20 years ago, 15 maybe–those rivalries, the sum bulk of tradition, would have mattered more than money. Money has always mattered, of course. But in the final weighing, a lot of money added to tradition would have more value in college football than a little more money added to the abandonment of that tradition.

We’ve all known that’s no longer the case. We’ve known it for a while. But today is the hard proof. Today is the final, depressing milepost to pass on our way into the future. Yesterday I passed on the self-admitted #GeekiestTweetEver, featuring this exchange:

[Tom] Osborne: “The other conferences are strong my Lord. Their roots go deep”
[Jim] Delany: “Rip them all down”

On one hand: Heh. On another: have you really considered how deep the roots Nebraska is pulling up go?

The Huskers and Jayhawks have met on the football field every single year since, every season since 1906, the longest uninterrupted rivalry in college football. The Huskers have played Missouri 103 times , every year since 1922. It is the third-oldest college football rivalry west of the Mississippi. The Huskers and Sooners met every year from 1921 through 1997, have met a total of 85 times, and at one time were arguably the biggest, most important rivalry in the country.

Beginning in 2012, Nebraska will play one of these three teams at most and possibly none of them. Their schedule will instead feature eight games against the current Big Ten, teams like Michigan St., Penn St., Indiana. Nebraska will travel to play Purdue, and it will be a conference game. The Huskers have exchanged hundreds of collective years of football history for a schedule that will bear no history at all. Rivalry, gone. Tradition, dust. To quote Fargo: all for just a little bit of money.

So I am sad. As a college football fan, how can you not be? But as an Auburn fan, I am also thankful. It’s not my team, thank goodness, that’s made this decision. The worst-case scenario for Auburn is that Texas A&M and maybe another team will join, and that our team will play our old rivals Florida and Tennessee less often, or have our new rivalries with LSU (especially) and Arkansas disrupted. I don’t believe our series with Georgia or Alabama are in any danger of lapsing.

But that’s today. Another 15 years, who knows? We lost Georgia Tech a long time ago. Then we lost most of our meetings with the Vols, and finally the series with the Gators became a once-in-a-while luxury. Nebraska and the other conference refugees have shown us today that there’s no rivalry, no tradition that can stand in the way of money. Why should Auburn’s be any exception?