Careful, SEC fans. I know it will be sorely, sorely tempting to bring the scourge of vuvuzelas into our hallowed stadiums now that they’ve got the official OK–they’re fun, they’re loud, they’ve got a certain cheap-yet-exotic cachet thanks to the World Cup, like Japanese candy, yes I wish I had an burnt-orange-and-navy-blue one to blow right now–but if it might be fun to have one or two kids in the student section tooting away for the cameras, an entire section (much less stadium) of them would make an SEC game into an nth level of hell. Caution is advised. Great power and great responsibility and all that.

(An aside for Mississippi St.: I was OK with the whole cowbell thing when it was just you guys being cute. But if the end result is, say, Florida Field filled to the light-stanchions with the sound of cats being raped in B Flat [to quote Dan Loney], I am not going to forgive you.)

Everyone present and accounted for. The expectation has been for a few weeks now that the only members of Auburn’s 2010 recruiting class to fail to make campus would be Jeremy Richardson (academics) and Shon Coleman (illness), putting the class at a perfect 25. That’s pretty much the case: only two other players, Demetruce McNeal and Joel Bonomolo, aren’t enrolled already. And I think we have it on fairly good authority that both of them will be in classes sooner rather than later.

There aren’t going to be any unpleasant surprises this year, folks. None.  None. Please contrast with the 2007 class and their 10/30 non-qualifier ratio, and smile.

Kudos. Like every Auburn fan, I spent plenty of time last fall thanking Ole Miss running back Rodney Scott for the amazingly quick thinking that saved Zac Etheridge’s career (and maybe much, much more), but it’s still excellent to hear that Scott has won the SEC’s Sportsmanship Award for his efforts. Richly, richly deserved. When Scott lines up against Etheridge in Oxford this October, I’ll still have to hope Zac and the rest of the Tigers bring him down at every opportunity … but can I hope they bring him down gently?

Back to the drawing board, fellas. The Football Outsiders preseason top 25 I mentioned earlier this week puts LSU at No. 10. The same LSU that was outgained by 25 yards a game last year. Right.

Yoxall: not a Dr. Seuss character. He’s better. Auburn strength and conditioning coach Kevin Yoxall gets a brief profile along with the rest of the SEC’s S&C coaches in this Chris Low overview. Interesting that he oversees all the S&C programs at Auburn; I have to admit I did not know that. Why do I get the feeling that football’s his favorite, though?

Fallout. There’s a gazillion responses to yesterday’s U.S. soccer triumph, but not surprisingly, two of my faves are from college football bloggers: here’s Spencer Hall‘s and here’s Brian Cook‘s. Opera, indeed. My favorite picture arrives via the Twitters: 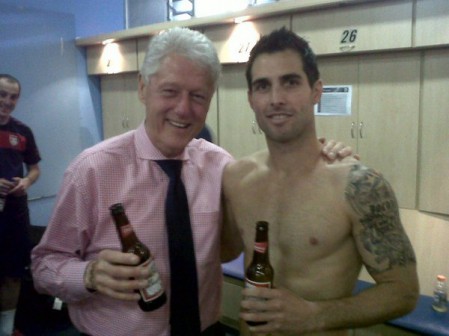 Normally I’d say “Geez, Boca, you’ve earned something a damn sight nicer than a Bud,” but then again 1. he’s hanging with Clinton, who strikes me a a lifelong Bud drinker 2. he is playing for team U.S.A, and what’s more American that winding down with a Bud?  U-S-A! U-S-A!

BlAUgosphere. Not much to report, but Acid’s Kentucky preview is up, and if you missed it the first time, J.M.’s report of Jimmy Buffett’s lost year at Auburn has come back to us.

Chuck Person has a ring. He sounds happy. Congratulations to one of Auburn’s great ones.