War Eagle, Marcus Rowland. Rowland is the very, very, very quick gentleman pictured above. He’s currently in Eugene, Ore., for the NCAA outdoor track-and-field championships, where he sailed through his heat and will be gunning for a national title in the 100-meter dash Friday night.

Yep, the 100 meters. The fastest man in college could very well be running at Auburn. Rowland entered the meet as the top seed, having run a 10.04–the best time in the NCAA this season–at a recent NCAA regional meet. (He did it in the quarterfinal heat, which seems a little odd, but I don’t know that much about track.) That 10.04 would have been one one-hundredth of a second off of a time that would have qualified him for the 100-meter final at the 2008 Olympics. Marcus Rowland is fast.

But he’s not the only Tiger shooting for a national title. Joanna Atkins won a national championship in the 400 meters as a sophomore and is seeded second, as is the Auburn 4×400 women’s relay. Atkins and the relay both qualified for the finals, Atkins posting the best time of the heats.

Here’s the fun part, if you’ve got CBS College Sports: the network will be airing both the 100- and 400-meter finals live Friday night, sometime between 7 and 9 p.m. central. Do you have anything better to do than watch Rowland and Atkins? Of course not.

Well, that explains the success. Auburn baseball tied an SEC record by having 11 players taken in the Major League Baseball draft this week. If you’ll recall, only nine players take the field at a time, so essentially MLB collectively just took Auburn’s entire team plus a couple of pitchers. (That’s how I’m looking at it, anyway.) The Tigers tied with UCLA for most players taken in the 2010 draft in all of college baseball. Five Auburn signees were also plucked out of high school or JUCO, though none before the 16th round.

How all of that will shake out for the Auburn roster, I don’t know. (Paging Kevin Ives … Kevin Ives to the courtesy phone please … ) But Trent Mummey–taken in the fourth round by the Orioles–is long, long gone:

“You always dream about playing professional baseball. And this is just one step closer to fulfilling my dream. As a little kid, you grow up watching Major League Baseball and watching all those pro guys play. And you go out in your backyard and dream of being one of those guys. And it’s just exciting to have that opportunity. And I’m just ready to hopefully take that step forward and join a bunch of other great Auburn players who have played in the big leagues.”

Good for him. Best of luck to Mummey and all the other draftees who made this season so thrilling, whether that luck is put to use in the professional ranks or back at Auburn.

While we’re talking baseball, Jay Jacobs and John Pawlowski sent out a post-Regional letter to Auburn fans you’ll probably enjoy. PPL’s Kevin hasn’t yet had time to write a full retrospective on the season, but his knee-jerk reaction to Monday night is a hell of a call-to-arms for Auburn fans to not let those phenomenal Regional crowds become a one-time blip.

Damn the lot of you. Phil Steele says that Auburn will face the 19th-toughest schedule in D-I this fall. Sounds pretty stout, but it’s still four spots cushier than last year’s schedule was projected to be.

Still, it’d be a hell of a lot easier if the SEC West would stop being so damn respectable. All six teams land in the top 50 toughest schedules with four of them–Mississippi St., LSU, Alabama, and Auburn–in the top 20. (Arkansas and Ole Miss come in at 33 and 50, respectively, thanks to their cakewalk nonconference slates.) Honestly, can’t we go back to the days of the Mississippi schools being horrible, the Hogs 50/50 to implode, and the Tide being coached by Mike Shula and his Mournful Existential Stare Into the Distance And Defeated Sigh? Is that too much to ask?

Speaking of preview magazines … Jay’s looking over Athlon’s and Lindy’s predictions for Auburn (and associated teams) and finding them a little less enthusiastic than our man Steele.

Meme. John at Arkansas Expats is delivering the “not-breaking news” that a certain Alabama media personality may just, in fact, be full of it. I remind John, and everyone, one more time: 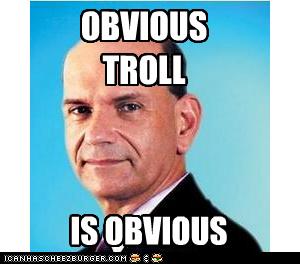 TWER. Some awesome stuff this week ’round the site. If you’ve missed it, the Plainsman once accidentally fooled some visitors into thinking World War III had broken out; Georgia-centric film from Pat Sullivan’s Heisman year on YouTube is way better that no such film at all; Andrew Seward of punk band Against Me! isn’t coming right and saying it, but we know which way his football bread is buttered; new(ish) columnist Dan Speegle has some thoughts on the role of athletics at the university level and Auburn’s calling therein:

Think about self image: how does it feel to be a machine, to be observed and graded and reacted to based upon how fast you run, how high you jump, how big you are, what you bench press? Even more, think about what it feels like, at 17, to be the great hope of your family for rescue, or for wealth, or for endorsement, or anything else. What is it like to transfer from the dependent child to the provider of the future, even when you can’t provide this year, or next, or the year after that?

The character of a sports program, the measure of the coaches and administrators and, yes, the campus community at large, can be measured by how empathetic and reactive, how helpful, they are to these young men and women, the level of social support the community provides, the outcome in terms of the personal, subjective success of the young people involved.

This is all part of the Auburn Spirit, the idea that sufficient grounding matched with a wealth of opportunity and effort, focused through the experience of faculty and guided by an institutional identity, will result in human success. This is the thing that attracts these incredibly vulnerable young athletes.