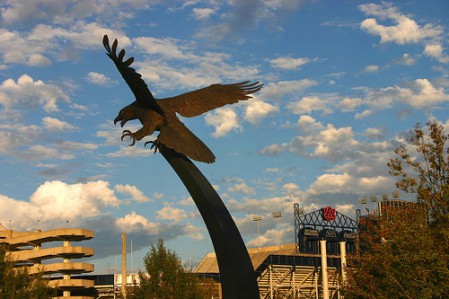 The odds of a fact like that going un-commented upon by the state’s columnists were always, what, 1 in 10-to-the-47th power or so? The only question was “Who?” and the answer ended up being Scarbinsky:

Can Auburn keep up without building up its own house?

The gap between Bryant-Denny and Jordan-Hare hasn’t been this large, in Alabama’s favor, since 1969. The next year, Auburn expanded its stadium to make it bigger than Alabama’s.

Both schools expanded more than once in the interim, but from 1970 until 2006, Auburn owned the largest on-campus football stadium in the state.

Clearly, those days are over.

Auburn has made some attractive cosmetic changes to Jordan-Hare in recent years, but the stadium hasn’t undergone a full-blown expansion since the upper deck and luxury suites were added to the east side for the 1987 season.

You don’t need the biggest and nicest house on the block to win a championship. If you did, the Duke basketball program wouldn’t have acquired yet another banner to hang in the rafters of the quaint fixer-upper known as Cameron Indoor Stadium. [That’s an interesting reference. Where have we seen K-Scar and Cameron mentioned at the same time? Oh, right, here. Hmmm.–ed.]

But a bigger and nicer stadium doesn’t hurt, especially on official recruiting weekends and unofficial visits, and nobody has done more in recent years to make its stadium bigger and nicer than Alabama.

This may be true. But there’s obviously a ton more to recruiting than just being able to show off the biggest stadium possible, or it’s a good bet Gene Chizik would have asked for that $16 million to go towards a J-Hare expansion rather than the new indoor practice facility.

What’s also true is that, frankly, there’s just no need to expand Jordan-Hare at the moment. Sadly, it’s hardly a state secret that Auburn’s had trouble of late selling out Jordan-Hare’s current capacity, much less an expanded capacity. The AUfficial site has been hocking tickets to certain games right up until kickoff, more-or-less, the last couple of seasons. If there really is an arms race for the state’s largest college football stadium, it’s one Auburn’s best off simply conceding. It’s a brutal admission to have to make. But adding 10,000 seats for them to just sit empty four, five, six times out of seven or eight home games is just throwing good money after bad. We can talk again in a few years if/when Chizik and Co. have the program back in the SEC title mix, but for now … no.

So what does Auburn do to keep up the crimson Joneses? Scarbinsky’s right about one thing–we have to come up with something, if for no other reason than pure pride. We are not second-class football citizens in this state, and the stadia shouldn’t reflect that. Jay Coulter has an excellent start:

Instead of focusing on seat count, Auburn officials need to focus on skyboxes, aesthetics and amenities. Auburn currently has 70 luxury suites. For a stadium this size, it’s on the low side of adequate.

While there’s no wait for season tickets, you can expect to sit out in the elements for nearly a decade before working your way off the skybox waiting list. The University can make significantly more money adding luxury suites in each end-zone rather than focusing on seats. Jacobs has made this point many times in the past.

Most impressive about Alabama’s recent renovation is not the number of seats (101,000), but the added amenities that put the facility on par with the NFL and MLB. In addition to adding nearly 8,500 more bleacher seats, Bryant-Denny is adding eight stories to its south endzone that will include a marketplace and two floors that will house restaurants for scholarship donors. At a cost of $65 million, school officials expect to recoup their investment quickly.

It’s going to take more luxury boxes, for a start. But it’s going to take more than that. It’s going to take the kind of innovation, vision, and commitment that’s already given us the Auburn Arena. Maybe my expectations are too high for that facility, but I think that’s the aim here: to have a football stadium whose concourses, amenities, and overall feel are every bit as unique and uniquely Auburn as the Auburn Arena’s. That building is going to be capital-S Special. J-Hare already is in a lot of ways, of course, but could it be more special? I think it could be. I think, sooner rather than later, it kind of has to be.

It’s all very easy for me to sit here and write this, I know. I’m not an architect and don’t know how to accomplish goals like those. I’m not an accountant privy to Auburn’s finances and don’t know exactly how much money Jay Jacobs might have to play with. But what I am is an Auburn fan who believes and believes fervently that Auburn can– and will–find a way to have a first-class college football stadium that bows to no one’s, regardless of capacity and regardless of what palaces our counterparts across the state are building.