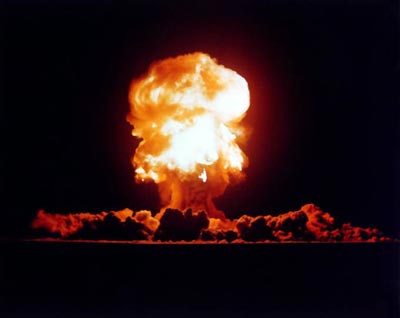 It still seems like too great a coincidence to be fact: after five years of perfect conference stability at the BCS level and after four years of NCAA investigation into USC athletics, not one but two Big 12 teams take off for greener pastures the exact same day that the NCAA breaks out the sledgehammer on the Trojans in epic fashion. Today is officially nuclear. Happy Nuclear Day.

Column coming tomorrow, but for now, a few scattered thoughts, first on one issue, then the other:

More to the point, as Will Collier said at Rivals today: “I don’t care.” When it comes to that Orange Bowl, I don’t, and if you do–if you feel the AP and BCS need to bend over backwards to retroactively anoint Auburn the true champion or that something, anything is missing from that 2004 season–I’ll remind you that we wear orange-and-blue around here, and not crimson.

—  Like everyone else, I feel terrible for the USC players that are now going to be deprived of two bowl games for something that had nothing to do with them (though transfer opportunities surely beckon in many cases), and even worse for the freshmen who signed their LOIs last spring while under the illusion the NCAA was going to play nice.

But it’s nice to see the NCAA bare its fangs when it has to. (Not as nice as the startlingly vindictive Tide fans believe it to be, but nice.) The old joke here is the one from Jerry Tarkanian, the old UNLV coach, who once said that the NCAA got so mad at his crooked Runnin’ Rebels they put Cleveland State on probation. It’s a clever line, but when it comes to college football, it’s just not true. The only two programs this past decade to receive sanctions like these are the Trojans and, of course, Alabama. You can’t really get any more blueblooded in college football than those two programs. When it comes to the NCAA and football, there really is no such thing as too big a target, apparently.

— It’s going to be a long road back to respectability for USC under the yoke of these kinds of restrictions, so it’s natural that when they looked for a coach with a long history of steady, patient program-building, a coach with a clean record and respect for the NCAA rulebook, a coach who’ll be comfortable ducking below the media feeding frenzy, putting his head down, and quietly going to work. Which is why they hired Lane Kiffin.

— Well, it’s happening. But even after the reports that Mike Slive was chatting up Texas A&M, I still don’t expect the SEC to join in the “party,” at least not this summer. Until we hear otherwise, the assumption is that Texas, A&M, and Texas Tech are coming or going as one block, and I haven’t seen any indication that the SEC is so desperate to take on the Longhorns they’ll welcome the Red Raiders. Besides, all the rumors regarding Texas have involved either the PacTexas-Sixteen or–new for this afternoon–the Big Tenwelven. The only whispers we have about how Texas feels about the SEC is the rumor Mack Brown doesn’t want to bother having to play ‘Bama, Florida, LSU, etc. And if the SEC doesn’t land Texas or A&M, what’s the point?

But the Staples report is a game-changer. Sure, as I said earlier this week, Slive doesn’t have to do a damn thing right now. But apparently he’s not taking my advice; he’s doing some damn things, right now, as we speak. At the very least, we can say this: the SEC is having its say in what’s happening. If this is Slive just taking the temperature out there, cool. If he’s bound-and-determined to invite the SEC up to as many teams as the Big Tenwelven or Pac-X, that’s rash. Patience, patience, patience, please.

— You probably also can’t rule out the SEC biting on the Texas block now that Baylor seems to have been cast adrift. Add those three for the West, add ACC School X in the East, and there’s a 16-team SEC that sort of, kind of, works. Your potential SEC West in this scenario: Texas, Texas Tech, Texas A&M, Arkansas, LSU, Ole Miss, Miss. St., Alabama. In the East: Auburn, Georgia, Florida, Tennessee, Kentucky, Vanderbilt, South Carolina, and then either Ga. Tech, Florida St., or Clemson. (Tech, please.)

Yeah, I know this scenario splits up the Iron Bowl, but Auburn’s got way more history with the Eastern schools than the Western and the Tide wouldn’t miss anyone other than Tennessee. And, uh, Auburn. It could work. Maybe.

— Rumors out there about Oklahoma joining the SEC, which, please. As in the case of Texas and its two coattail schools, no way the Sooners and Okie St. get split up, and now way the SEC–or any conference that’s not the PacTexas-16–finds room for both.

— Again, more on this tomorrow.