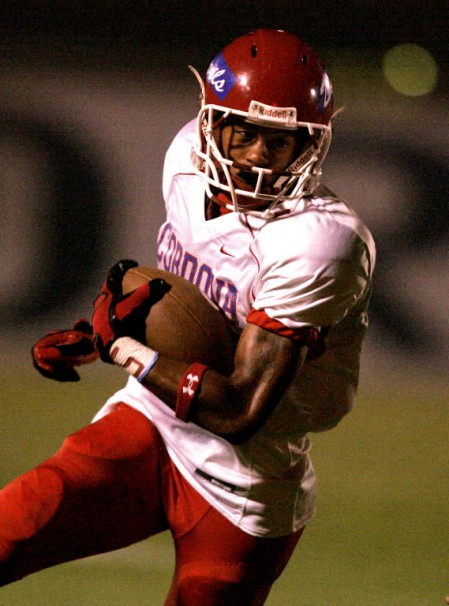 Very little seems to get Auburn fans’ collective goat more than having a recruit that seems to be solidly in the orange-and-blue fold that jumps ship at the last minute for what they decide are greener pastures. That phenomenon has blessedly been on the decline since the advent of Chizik and Co.–who managed to get through the entire 2010 recruiting cycle without a single decommitment other than D.J. Howard, who by all accounts didn’t actually decommit so much as slowly burn his bridges with the AU staff–but hoo boy, remember when it looked like Shon Coleman might bolt for Tuscaloosa at the last minute? A minority of Auburn fans weren’t being very nice, to say the least.

The lesson of Ryan Smith’s commitment is that we should all probably calm down a bit the next time a situation like that arises, since those are the exact same shoes Kentucky fans found themselves in regarding Smith. The day before Signing Day he was committed to the ‘Cats and off to Lexington; the next morning he was signing his LOI and faxing it to the Plains.

This is not to say anything bad about Smith, trust me; for a lifelong Auburn fan to get the offer he’d waited for all along at the last minute is a great story. I’m happy for him, and happy for Auburn, and happy that Auburn is Auburn and Kentucky is, unfortunately for them, Kentucky, and that Ryan Smith is now a Tiger. I’m just sayin’: it happens to us all. Let’s keep this in mind next time, random Internet jerkwads, hmm?

None of that, of course, really has anything to do with Ryan Smith, the player. So we’ll get to that now:

BASICS: Ahoy, AUfficial Signing Day bio sheet, what do you have for us?

HIGH SCHOOL: Ranked as the No. 27 player in Alabama by SuperPrep … Named to the Class 3A All-State First Team as a senior and junior by the Alabama Sports Writers Association, and earned 3A Back of the Year honors as a senior … Finished fourth in the Alabama Mr. Football voting as a senior … Led Cordova to three straight appearances in state title game … Rushed for 1,856 yards and 26 touchdowns as a senior … As a junior, rushed for 1,376 yards and 19 touchdowns on just 175 attempts (7.9 ypc) while throwing for 1,274 yards and 20 scores … Also had 70 tackles and six interceptions during junior season.

That’s right, it’s yet another chapter in the epic tale of “High School Quarterbacks Auburn is Moving to Other Positions.” But unlike fellow 2010 classmates Trovon Reed, Ryan White, and Chris Davis, Smith’s a big kid: 6-2 and 208, but agile enough to rack up all those rushing yards … no wonder he’s on his way to safety. But if his experience at QB is any indication, he’s got the athletic chops to flourish in the defensive backfield, right? 3A Back of the Year isn’t the sort of award to sneeze at, I don’t think.

RECRUITNIK HOO-HA: Smith, unfortunately, was not a favorite of the gurus. Rivals gives him a low-end three-star grade of 5.5 and doesn’t rank him either in their athlete rankings or their Alabama top 40. Scout also gave him three stars but did plug him in at No. 93 on their list of safeties and say this:

Ryan Smith was “Mr. Everything” in high school and certainly can play a number of positions at the next level. He is a very talented athlete who has good speed and coverage skills. He is a physical player and can lay the lumber on defense. He has a total grasp of the game.

Usually ESPN’s a little kinder to the QBs-turned-ATHs than the other two services, but not really with Smith. He earns just two stars there, a ranking as the No. 171 athlete*,  and a grade of 74, tying Jessel Curry for the second-lowest grade in Auburn’s class. However, they do write:

Smith is a versatile athlete that can play on either side of the football. He has impressive size for a skilled athlete along with good speed and quickness. As a spread quarterback runs the option well and hits the perimeter like shot out of a canon; accelerates by would-be tacklers. Talented openfield runner that has the shake and bake to make defenders miss and slip through traffic with quick cuts while going north and south … Tough defensive back that can shed blockers while coming up on run support to make a play on the ball carrier. Speed is displayed as a kickoff return specialist that is fluid as he makes his way through traffic. Smith has the athletic ability and overall talent to line up at several different positions. He has a chance to be a very productive player at the next level.

I do think you see here, though, why Smith might be fighting an uphill battle with the gurus, as White and (as we’ll see eventually) Davis did: they’re not really able to peg him into one position. Versatility always gets lip service, but it doesn’t count for nearly as much with these guys as pure explosiveness. Grain of salt, if you ask me.

That said, Smith doesn’t have the offers to really buck the gurus: Kentucky and Louisville were his only BCS offers other than Auburn. (Scout also reported a Vandy offer.) Also interested: Southern Miss, Marshall, UAB.

LINKS OF POTENTIAL INTEREST: Rivals is being nice:

You can also watch all the Cordova 2009 football you could ever want to watch thanks to one diligent player or coach: vs. West Blocton, Montevallo, Luverne, etc. Smith, No. 5, figures prominently in all. There’s also highlights and interviews from the 3A championship game against Piedmont, in which Smith ran for a couple of scores but also fumbled in overtime to end the game. He took the postgame interview in stride anyway, earning the respect of the Press-Register’s Josh Bean:

He showed precisely why he’s one of the state’s elite players in Thursday’s title game. Smith finished with 125 yards on 23 carries, including touchdown runs of 26 and 18 yards. He caught two passes for 59 yards, including a 44-yarder. He returned a first-half kickoff 54 yards to set up his first touchdown run. He also had a first-half interception.

It makes you wonder if he taped ankles before the game or sold popcorn at halftime.

Smith’s performance on Thursday showed why it’s unclear if he’ll play receiver, running back or defensive back in college.

But most people won’t remember much of that. Many will remember the fumble.

Smith didn’t duck cameras or refuse to talk about the play. Instead, he answered anything and everything, showcasing championship character on a day when he was so close to winning a championship.

So that’s cool. Also cool: that Smith is approaching his arrival at Auburn as something he’ll need to be prepared for from Day 1:

Playing time was also a big factor for Smith. In high school he was a multi-position star, but at Auburn he will play safety.

“They told me they didn’t have safety depth,” said Smith. “They wanted a safety that was going to come in and help that rotation.”

Smith is already preparing to play on the SEC level. He thinks he has an opportunity to play early at Auburn.

“I think if I go in there showing that I’m ready, then I do have a good chance,” said Smith. “A lot of that is on my shoulders.”

Cordova head coach Pete Bush said Smith is a star wherever you put him on the field, but is well-suited for the safety position.

“He’s smart and he reacts real quickly. I think he’ll do great at safety,” said Bush. “He’s a hard worker.

“He is just one of those kids you like being around.”

On the one hand, would a kid who’s really spent most of his time at QB or RB be capable of playing safety in the SEC right away? On the other, we’ll remind you that the current Auburn safety depth chart consists entirely of players who have either suffered major, career-threatening injuries (Savage, Etheridge, McNeil), players who have had several opportunities to claim playing time in the wake of those injuries and never did (Cole, Slade), or walk-ons (Means). It’s not an exaggeration to say the chance may be there for, if not an immediate starting job, some immediate snaps here and there.

Rivals might not have thought Smith measured up to the rest of the state’s talent, but Andrew Bone rated Smith the No. 15 prospect in the state at the end of the season, ahead of much higher-profile players like LSU commit Sam Gibson and Tide lineman Wilson Love. FWIW.

An old friend of mine we’ll call “D” watches a lot of Alabama high school football–I’ve asked him to evaluate Clint Moseley in the past for me–and he got to see Smith play twice in person this year, once against Dadeville in the 3A playoffs and once in the Super Six. He said Smith was a “superstar” in the Dadeville game and had this to say about his college prospects:

Safety? He is laterally quick, fairly tall, but his long speed isn’t good enough to be a corner. He is young. “Vladimir Guererro”-esque with his arms and legs appearing to nearly disjoint as he ran and cut. I don’t think I would consider him on offense because he fumbled in overtime of the state championship and was loose with the ball against Dadeville too. I think free safety is a good place to start. He was the best player on the field in the Dadeville game (or maybe [DHS quarterback Kyle] Caldwell), but he is the only player athletically that caught my eye in the Super 6.

Again, FWIW. If you’re curious, the Cordova official site wrap-up of that (fairly epic) Dadeville game is here and the highlights are right …. here (check out Smith’s tackle at the 3:51 mark):

WHAT CONCLUSIONS WE CAN DRAW, IF ANY: OK, so, some honesty: Smith has his work cut out for him. The depth chart at safety may be wobbly at the moment, but he’s coming in 1. alongside a pure safety prospect with better offers and guru approval in McNeal 2. only a year ahead of a rock-solid JUCO safety prospect in Izauea Lanier and, very likely, a top-100 overall safety prospect in Erique Florence. Plus Ikeem Means came on strong in the spring, Mike McNeil is still only a junior, and there’s always the chance that Daren Bates could move back to safety. If Smith doesn’t hit the ground running, there’s a chance he could be squeezed out, and he can’t blame his lack of guru approval or offers on a lack of visibility, I don’t think; maybe Cordova isn’t Hoover, but they’ve played three straight 3A title games and anyone who came around to look at Tim Simon would have gotten a look at Smith, too.

But I do think he can blame them on his position shifts and position questions, because, dude, he’s 6’2″, 200-plus and still shifty enough to return kicks and make the kind of cuts you can see in his highlights. Physically, he’s an absolutely prototypical safety, exactly what you’d want, and by all accounts both hard-working and smart enough to maximize those gifts. There’s plenty here for Tommy Thigpen to work with; once he settles into this one position, who knows? If Chizik and Co. didn’t feel comfortable with Smith as their second safety prospect in this class, they’d have just kept Howard.

So: unlike a lot of the higher-profile prospects in Auburn’s 2010 class, I’m not going to say I’m expecting Smith to become a star, an immediate contributor, or even necessarily a starter down the road. But it won’t surprise me a lick if he’s all of those things someday; there’s a ton of upside with Smith, and if maybe I’m more purely excited about some of Auburn’s other recruits, there’s none who I’d say I’m more intrigued by. My take is that the ceiling here is very, very high.