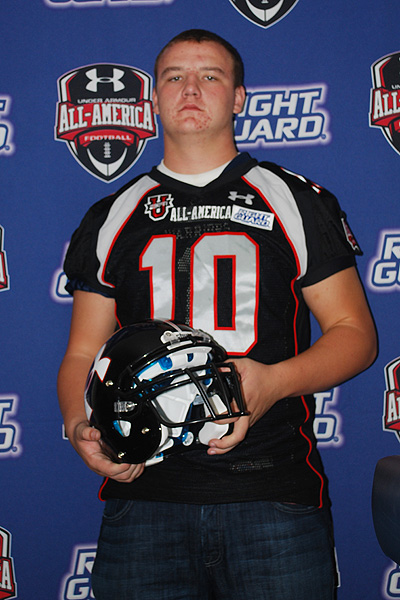 The ironies of recruiting don’t come much thicker than this. When Dakota Mosley was first offered, I think even the most fervent Chizik and Co. Kool-Aid drinkers had to at least consider the idea that Mosley had been offered first and foremost as an extra incentive to his (much more highly prized) teammate and friend Michael Dyer. If Mosley ended up being a solid player, all the better, but–the “package deal” thinking went–as long as Dyer committed, he’d be worth it even if he wasn’t.

So go figure this:

One of the nation’s top high school running backs helped deliver a tight end to Auburn on Saturday.

Dyer, the No. 1 high school running back in the nation according to ESPN, and Mosley both visited Auburn for the Iron Bowl. Dyer did a little recruiting for the Tigers along the way.

Yup: the supposed throw-in had to be hounded to Auburn by the supposed prize. What this tells us: Auburn’s coaches did not see Mosley as just a throw-in. Otherwise, once Dyer was safely in the fold, why not just let him go elsewhere? Because Mosley has plenty going for him that has nothing to do with Dyer, as we’ll see.

HIGH SCHOOL: Ranked 10th among tight ends by Tom Lemming on Maxpreps.com … Ranked as the No. 7 player in Arkansas by SuperPrep … Named to the All-Southeast Region team by PrepStar … Was a participant in the 2010 Under Armour All-American game … Named to the 2009 Class 5A Southwest All-State Team by the Arkansas Activities Association … Had 36 receptions for 471 yards and 5 touchdowns on offense and recorded 60 tackles and 6 sacks on defense as a junior … Caught 11 passes for 186 yards and 4 touchdowns as a sophomore.

Well, the goods save for his senior stats. (According to Scout: 36 catches for 471 yards and five touchdowns Worth noting here that 1. he’s 6’4″, good size even by tight end standards 2. he was versatile enough to make an excellent impact on defense as well as at TE. Good signs.

RECRUITNIK HOO-HA: The funny thing about the Mosley-as-Dyer-bait line of thinking was that even if his recruiting profile wasn’t terribly impressive when he was first offered, by the time the final grades were handed out, he would up with a perfectly respectable set of ratings and honors. Rivals saw him as your typical three-star, with a 5.6 grade, a No. 33 tight end ranking, and the No. 11 spot in relatively talent-starved Arkansas.  Scout was slightly more enthusiastic, ranking him as the No. 26 TE.

But the folks at ESPN loved Mosley from the start, inviting him to the Under Armour game, ranking him in their top 15 tight ends, and giving him a high-end three-star rating of 79. Their evaluation:

Mosley presents a nice target in the passing game. He possesses good size and carries good bulk with the frame to add additional size with time in a college weight program. He is a legit receiving target and he has very good hands. Displays the ability to consistently catch the ball with his hands and really looks comfortable snatching the ball out of the air … Does a good job of using his body to shield defenders from the ball and will take a hit to make a catch. Displays solid speed for his size, but is best in the short-to-intermediate passing game and in the red zone … Mosley is a good receiver, but can really up his stock if he can contribute as an inline blocker. Displays the toughness and could be like an extra lineman with his size potential. Displays the ability to get good hand placement and is tough to beat when he gets locked on. Needs to watch his pad level, but moves his feet and can create some push. Mosley is a good tight end prospect and we would not be surprised to see his stock rise over the year. Best football is definitely ahead of him.

Auburn wasn’t the only SEC program that thought so: Tennessee came after him and came after him hard. Other offers included Arkansas, Florida St., Tulsa, Louisiana Tech, and even–reportedly–Southern Cal. We can safely say that Lane Kiffin, at the least, liked what he saw in Mosley.

Another thing to remember: all of these guru evaluations are solely for tight end, while Mosley could very well switch over to tackle once he arrives at Auburn. So they might mean even less than usual.

LINKS OF POTENTIAL INTEREST: No embeddable video, none at the AUfficial site, none even at ESPN. You’ll have to pay for it at Rivals, I think.

There’s a couple of different places to listen to Mosley talk, though. One is here at Rivals, another is here side-by-side with Dyer at “”Hog Zone.” (Heh.) There’s an, ahem, straightforward text interview here in which Mosley shows excellent taste in ethnic food. Shame he can’t really pursue that basketball hobby any more.

The important info from those clips? That Malzahn has told him he’ll be sticking at tight end for this season, at least. Which makes sense: the depth chart there reads 1. Lutzenkirchen 2. Uh, Cooper? It can use the help.

The gurus’ ratings of Mosley might not have seemed that enthusiastic, but a couple of them did offer up some encouraging direct quotes. ESPN’s Craig Haubert:

“The top 15 tight end is not a pick-up that will create the same excitement in Auburn nation as his teammate did, but this is a good addition of a somewhat under-the-radar player. Mosley is a prospect with good size and presents a nice target in the passing game. Despite looking more like a lineman, he has very good hands and a nice catch radius being able to using his body and go up and get the ball. He also has potential as an in-line blocker with his size.”

On the Tigers’ class in general right now: “It’s a very good class. It’s the best I’ve seen from Auburn. You know about the four- and five-star guys, but they have some great sleepers, too. Kenneth Carter is one. Dakota Mosley is a lot better than people think. I’m not sure he’ll stay at tight end at Auburn, but he’ll be good anywhere they put him.

Mosley repaid those kinds of evaluations with what seemed to be a solid performance at the Under Armour game. Report:

We also think tight end Dakota Mosley (Little Rock, Ark./Little Rock Christian) looks the part. We had the chance to see him during a game against Pulaski Academy earlier this year and he struck us as a “jack-of-all-trades” jumbo athlete and stood out on both sides. It will be good to get a look at him just as a tight end this year. He is committed to Auburn, one of several future Tigers in the game.

Mosley also wound up serving as the long snapper for both teams since he was the only guy who could regularly get the ball back to the punter. Like he wasn’t versatile enough already, right?

Here’s another link to ESPN, recounting Mosley’s attempts to get out from Dyer’s shadow. Money grafs:

Mosley was impressive Friday night, when Little Rock Christian defeated Pulaski Academy, 42-21, to clinch a playoff berth. On offense, he helped set the tone early with a 46-yard reception that set up the game’s first touchdown. On defense, he was extremely active in putting pressure on the opposing quarterback, tipping a couple of passes and causing havoc for the Pulaski offense.

“I have to give all the credit to my teammates,” Mosley said. “If it were not for them, this would not have happened. I just give it all to them. It was a huge win. It gives our team great momentum. We will go to the playoffs and see what we can do. It just felt real good.”

Mosley, the nation’s No. 13 prospect at his position, according to Scouts Inc., is a well-rounded tight end. He catches it as well as he blocks, though he says blocking is his strength.

“That’s the thing I really think I do well,” he said.

Admittedly, if that’s the case, you wouldn’t expect him to stay at tight end for an offense that rarely asks its tight ends to put a hand down and just be an inline blocker. Then again, Tommy Trott–even while split wide–spent more time blocking than receiving, so maybe I’m just way off on this.

Lastly, I don’t care how Mosley spends his free time, but he probably should be more careful about the kinds of pictures he puts on the Internet.

WHAT CONCLUSIONS WE CAN DRAW, IF ANY: Package deal, schmackage deal. Mosley has positive reviews, some quality offers, and most importantly, that versatility–maybe he’s not quite cut out for either tight end or the offensive line. But the odds are that he’s cut out for one of them, and Auburn’s coaches can figure that out.

Remember, too, that both tight end and the offensive line are two areas where Auburn desperately needs bodies. Here’s a bet that Auburn finds somewhere for Mosley to contribute by the time he’s a redshirt sophomore or junior.