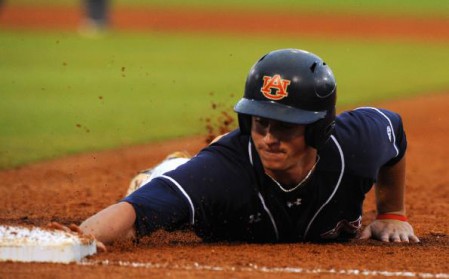 When we last left the Auburn baseball team here at WBE, we were waiting out a rain delay before the Tigers took on Ole Miss in the third round of the SEC Tournament. Since then, a lot of things have happened:

1. Auburn lost that game 10-7 in extra innings, eliminating them from SEC tourney contention. Sigh. LSU would go on to down Alabama in the final.

2. As expected, Auburn was named one of the NCAA’s 16 regional host sites for the 64-team NCAA baseball tournament. It’s Auburn’s first time hosting a regional since 2003 and fourth time ever.

3. As also expected, Auburn was not named one of the eight national seeds and SuperRegional hosts. Their regional is paired with the Georgia Tech regional, which also features Alabama (!), Elon, and Mercer.

4. As for Auburn’s regional, the Tigers will play host to Clemson, Southern Miss, and Jacksonville State. Auburn will open with No. 4 seed Jax State at 6 p.m. Friday.

That’s a lot for four days, huh? Some reaction:

— I’m not really the guy to go to for an analysis of how tough this regional is, but I don’t think the Committee did Auburn any favors. Clemson ranks No. 19 in the Boyds’ World RPI and tied Florida St. for their division title in a rough ACC. Southern Miss isn’t quite as good as they were a year ago–they rank No. 62 in the RPI–but it’s still a program that went to Omaha just last spring and upset powerhouse Rice to win the C-USA title. And if Jax State isn’t anyone’s idea of a powerhouse–they finished second in the Ohio Valley in the regular season–they played Auburn tough in a 9-7 loss just a couple weeks ago, and there’s much worse leagues out there than the OVC.

All in all: I’m guessing things could have been easier. Having Clemson around seems a particularly nasty touch.

— Of course, it won’t matter much if Auburn doesn’t play better than they did in Hoover. It’s hard to call the showing a complete disaster when they defeated one of the best teams in the league (and fellow Regional host) in South Carolina. Besides, as the “LSU defeats Alabama” conclusion showed, Auburn was hardly the only favorite to underperform.

Still: if Auburn’s three games in Hoover had been a series, the 1-2 record and -7 run differential would have been their worst overall performance of the SEC season. Not what you want heading into the NCAAs, I don’t think.

— What was particularly frustrating about the Ole Miss loss was that it was the kind of game Auburn would want to play against the Rebels; they chased Ole Miss’s starter early and turned the game into a battle of who had the better batters and who had the better bullpen. Even without the injured Trent Mummey and Brian Fletcher, the Rebels’ mediocrity down the stretch meant that Auburn should have had the advantage in both of those areas.

Too bad they threw them away in that flurry of errors. Bad start by Nelson or no bad start by Nelson, there’s no reason an offense that’s struggled as much as Ole Miss’s should have scored 10 runs.

— Rough tournament for the Pythagorean ratings, huh? That Florida team I’ve been ragging on didn’t make the final … but they still lasted longer than any of the four teams ahead of them. Oh well.

— It doesn’t sound like Mummey is progressing very quickly from his injury. Bad news, but at least Auburn has plenty of experience having to play without him. If neither he nor Fletcher can go, though … well, the math behind losing any 2/9ths of your lineup, much less the 2/9ths as productive as Mummey and Fletcher have been, isn’t friendly at all.