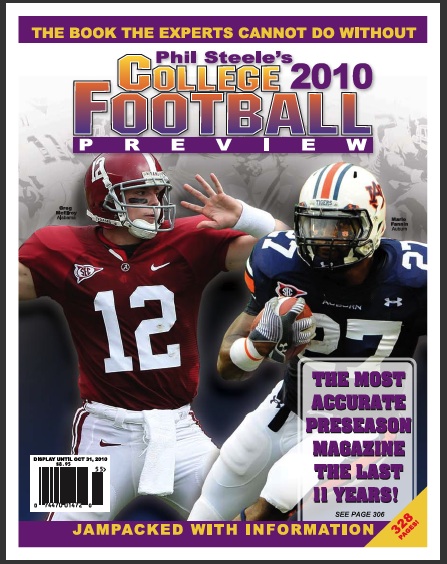 Since it’s available for one day only, I’d be remiss if I didn’t point you towards PhilSteele.com today and his free preview of his typically exhaustive two-page Auburn analysis. How exhaustive? Steele wants you to know that even though they’re not in the listed depth chart, Auburn can also call on Watson Downs (6’0″ 213 So) and Patrick Butler (6’0″ 214 Sr) at linebacker.

1. Not that it’s news by now–Steele’s top 25 has been floating around the Interwebs for a few days now–but Auburn lands at No. 15 in Steele’s preseason rankings. That’s one spot ahead of Notre Dame (you’d think Steele would have been beaten down by the dramatic Irish disappointments the last few years, but at least faith in Brian Kelly makes a lot more sense than faith in Charlie Weis), and maybe that doesn’t seem to represent that big an Auburn investment … but it does put the Tigers 11 spots ahead of LSU, 6 ahead of South Carolina, 4 ahead of Georgia, and 2 ahead of Arkansas.

Process of elimination, that places Auburn 3rd in the SEC behind only Alabama and Florida. Pretty big compliment, I’d say.

2. On the offensive line:

Their 111 career starts returning rank #5 in the NCAA and they are now in the 2nd year of the new blocking
schemes. This is my #5 rated O-line in the FBS.

3. Yes, I think he’s bullish on the offense: the running backs “look, like a very talented unit once again”; “There is a lot of talent and it is the 2nd year of the offense” for the wide receivers; and at quarterback, “despite the loss of their starter, this unit has almost equal the experience and could actually have improved numbers.” If you’re not a regular Steele reader this may sound like faint praise, but it’s actually closer to a rave review–calling for improvement from all four offensive units is not something Steele does very often.

4. Fun facts from the annual series bits: Auburn has outgained Miss. St. 9 years in a row; they’ve won 13 in a row against Clemson (how did I not know that already?); the Auburn-Arkansas game has been won by the Vegas underdog four consecutive years; Auburn has won 9 games in a row the week after playing LSU.

5. Your money “graf” from Steele’s forecast:

I’m not sure I’d say that Steele is predicting an undefeated Iron Bowl, exactly … more like saying that it’s a distinct possibility. (I think his official “predictions” tend to be the summation of all his “power rankings” rather than the opinion of any one.) And it strikes even your humble Auburn Blogger as overly optimistic.