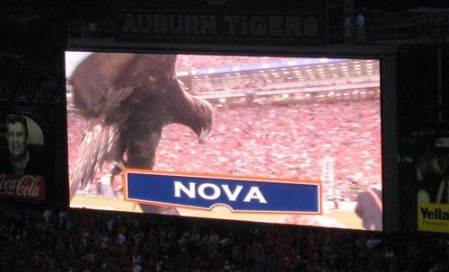 Mr. President, we must not allow a mineshaft Jumbotron gap. The Auburner has drawn up one of their typically modest proposals:

This year, the federal government is spending approximately 9.7 billion dollars per day to operate. Auburn spent 2.9 million dollars on their 74×30’ jumbotron. If the senate voted to shut down the entire government for a single day, and divert the funds to a new jumbotron for Jordan-Hare; then, Auburn could purchase approximately 3,344 exact copies of their existing jumbotron, and use those to form two giant screens , one for each end-zone, each measuring in at 3.7 million square feet.

You know there’s visual aids there to help you understand why this plan is not only sensible, but a necessity. But maybe the most interesting part of the post is the graphical representation of the SEC’s current jumbotrons: 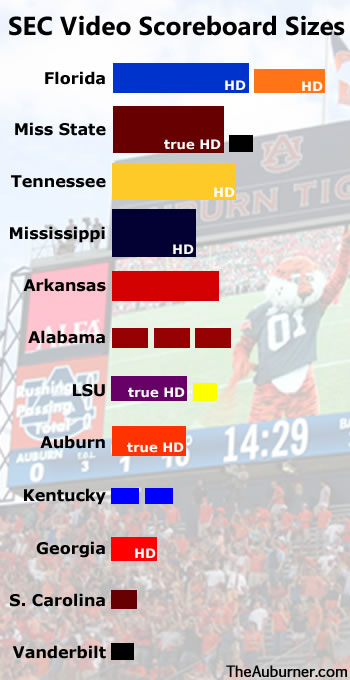 First of all: this is the Lord’s graphical work. Second, yeah, as an Auburn fan, I can live with this. I’d definitely rather have one really high-quality in-proportion HD screen than the set-up at, say, to pick a “higher-ranked” venue entirely at random, Bryant-Denny.

Third: seriously, what’s with the King Ghidoratron in Starkville*? Yeah, it’s nice, but … forgive me if putting that screen in that stadium is a little like a balding 57-year-old purchasing a new Corvette.

Happy ending. Still wish we could have seen what Montez Billings could have done in Malzahn’s offense last year, but I’m happy regardless to report that Billings has signed a contract with the New Orleans Saints after impressing at a rookie minicamp. Saints head man Sean Payton:

“When they all come in we take the blinders off with regards to how they got here. Our message to them in our first meeting is, ‘How you got here is of no importance to us. What’s important is what you do when you get here.’ This is all about who gives us the best chance to win.’’

Best of luck to Billings as he tries to make the Saints’ final roster this fall.

BlAUgosphere. PPL’s Kevin bounced a bunch of questions off of a College Baseball Blog writer; you can read the intriguing results here. The consensus is that Auburn needs both a sweep against Tennessee and a series win in Oxford to claim a hosted Regional. I would hope Auburn might be able to get by with two wins both weekends, since that might nudge Ole Miss behind them in the pecking order, but they know more than I do. There’s more Regional chatter from Kevin here.

Of course, it would have helped to have not lost at South Alabama last night. the Jags are a solid program and are particularly tough at home, but still, the RPI boost would have been a big help. Kevin looks at the rest of the fallout.

Also on the bothersome side: sounds like Pawlowski might get a look as the new head guy at Arizona St., one of the nation’s truly plum baseball jobs.

Here at TWER, there’s a new edition of Bo Bits and some Bo vs. Dave YouTube action.

Turnovers = Turnaround. Blutarsky builds on my regression to the mean post with one devoted to that specific phenomenon as it applies to the largely random field of turnovers, complete with a super-handy chart listing every turnover margin for every SEC team for the past: 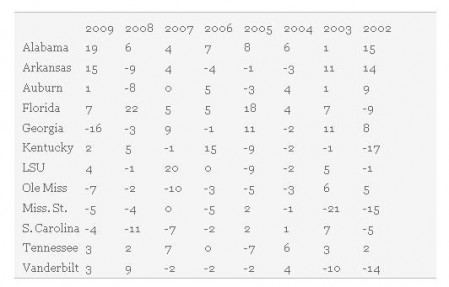 Here’s what jumps out at me: from ’02 to ’08 eight teams had margins greater than or equal to either +15 or  -15, and seven of those saw their margin swing by a minimum of 13 turnovers the following season. (2003 MSU is the sole exception.) Average swing for those seven teams? 16.4.

This would seem to indicate that Alabama may have a tougher time repeating than expected, and that Arkansas–hey, they were +15 last year, whaddya know–may also have a hard time living up to the hype.

Etc. Great minds think alike … A kid from Huntingdon declares for the NBA Draft, gets, oh, 27 seconds or so of fame … Patrick Nix is “at peace” in “heaven,” i.e. Vestavia Hills, where he’s waiting for his next coaching opportunity … I’m telling you, that ESPN deal was fool’s gold … and I feel really bad for showing you this, because it’s cruel, but thanks to the Street Fighter II trappings (and that I’ve watched it a dozen times today) I feel I have no choice (via):

*This reference was a mistake, because I went here to check the spelling, and the next thing you know I’ve wasted 25 minutes reading Godzilla-based wiki entries. Then again, when you run across paragraphs like
…

“Gamera has the general configuration of a turtle, albeit a tremendously large one that is capable of bipedal locomotion … His mouth is filled with teeth, with a pair of large tusks protruding from the lower jaws, a precedent unheard of in turtles, save perhaps for the prehistoric turtles Proganochelys and Odontochelys“

… has your time truly been wasted?