Some things are clearly worth re-posting. As a general rule I try to shy away from both shameless girls-in-bikinis pandering and the recycling of content already posted elsewhere on the site, but sometimes certain exceptions have to be made: 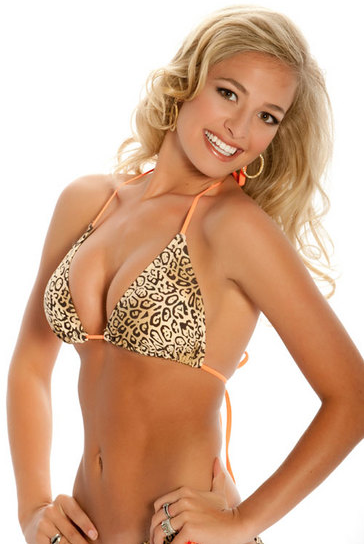 That’s Audrey Moore, Auburn student and this year’s Miss Alabama USA, who finished in the top 10 of this past weekend’s Miss USA pageant. The real shame is that she landed in the Miss USA field rather than Miss America, where she could have shown off her true talent: air guitar. She says she’s also an accomplished Rock Band enthusiast.

Speaking of Rock Band … there’s two developments worth noting in the announcement of the semifinalists in the great Auburn intro video vote-off (which, as a naked ploy to drive up traffic to the AUfficial site, has to have succeeded beyond its’ designers wildest dreams by now). One is that, as expected, the Orson-led effort to get Justin Bieber on the ballot failed to make it past the Auburn gatekeepers. Thanks for the pageviews, though, guys, srsly.

The other is that write-in favorite “Welcome Home” by Coheed and Cambria made the cut. I can’t say it’s a favorite, but at least I’ve got some late-night nostalgia for the song thanks to having played it more times than I could count back in those halcyon Rock Band I days of 2007. Not surprisingly, the blAUgosphere’s resident musician thinks Auburn could do better, and he’s right:

Sure, it’s paradise … if you’re not on a basketball court. Hey, remember when former Auburn commitment and JUCO point guard Anthony Salter asked for his release from his LOI? You’d expect that he’d have been able to land somewhere roughly equivalent to Auburn after backing out, right? Um, not quite:

The University of Hawai’i men’s basketball team added yet another new recruit to its roster today.

Anthony Salter, a coveted point guard at Iowa Western Community College, said today he is committed to playing for the Rainbow Warriors next season.

“Why not Hawai’i?” Salter said. “It’s beautiful here. What’s not to like? The campus, the facilities, the people, the coaches, the players. I saw all of that and it just felt like a good fit.”

Well, no doubt all of that stuff (particularly the setting) is all well and good, and if Salter feels like that’s his best fit, more power to him. But still … the ‘Bows have won a total of 34 games the past three seasons and haven’t been a factor in the WAC in ages, despite a substantial home-court advantage. Obviously Salter and Barbee didn’t hit it off or we wouldn’t be talking about this, and things may work out for the best for both parties. But I also have to wonder: if the Frankie Sullivan-at-the-point experiment doesn’t work out on our end, and Hawaii continues to flail on Salter’s end, will both parties eventually wish they had hit it off? (HT: BHGP.)

Bat-and-ball. Despite their disappointing opening-round loss to Florida at the SEC tournament and 10-17 league record, the Auburn softball team received an at-large invitation to the NCAA Tournament and will play Oregon this Friday in Atlanta. The Tigers are the No. 3 seed, with the Ducks No. 2 and hosts Georgia Tech the top seed.

That makes four Tournament berths in five years for Auburn, and though there’s still a lot of headway to make in the SEC standings, that’s still a big step forward from where the program was in the early part of the previous decade.

As for things on the men’s diamond, Bryan Matthews has some quality nuggets for you, including Auburn’s move up to No. 16 in the polls. Phillip Marshall was disappointed in the weekend’s attendance at Plainsman Park, and looking at attendances elsewhere in the SEC, I’m not sure I blame him.

Footbaw. Still not much happening on the gridiron front, but Phil Steele site-blogger “KoolBell” has leaked word that Steele has Auburn pegged for the second in this year’s SEC West and–this is the really stunning part–his preseason No. 15 team in the country. Steele’s struggled a bit the last couple of years but I’ll still take his approach based on actual, you know, facts over just about anyone else’s. If Steele’s on one side of a preseason argument and the mainstream folks are on the other–and that appears to be the case with this year’s SEC West–I’m much happier with him arguing on Auburn’s behalf rather than against. Can’t wait to see his reasoning. (Though I’m sure it will run along the lines of “Arkansas has no defense and is going to get slammed by turnovers; LSU was terrible yardage-wise and won’t be so lucky again.”)

Elsewhere, Chizik pays a visit to the U.S.S. Alabama and says Ben Tate apologized for the ridiculous goalpost-dunk that cost his team 15 yards against Northwestern (which, frankly, he’d better have); Tubby took a pay cut from both his former salary and Mike Leach’s to accept the Texas Tech job, but considering the Red Raiders are never going to be flush with cash, that’s not all that surprising; and the weekend visit from Kiehl Frazier didn’t produce any major fireworks, but it can’t have hurt anything, either.

Congrats. The Auburn track teams won eight titles at last weekend’s SEC championships, tying a school record. The men had their best finish since 2003. Sheniqua Ferguson was wrecking fools left and right, winning both the 100- and 200-meter dashes and spearheading the 4×100 relay. Not a surprise, then, she took home the Commisioner’s Trophy as the highest-scoring female athlete at the event.

Also worth a round of congratulations to the 45 Auburn athletes that graduated this spring. Notable names include Lucas Hargrove, Keke Carrier and Jordan Greenleaf from hoops, Mike Berry, Zach Clayton, Mike Goggans, Craig Stevens, and Aairon Savage from football, and Mr. Rhodes Scholar Jordan Anderson from swimming.

I swear to you, I will have my revenge, somehow, some way. Not Auburn-related, but I have to vent. I’m a subscriber to ESPN Insider, which means they also send me ESPN the Magazine as part of the deal, even though “the Mag” is just one notch above worthless at the best of the times and the worst–as in a story last winter on wild n’ wacky fan behavior that sincerely could not believe a fan would throw an octopus on the ice at a Red Wings game … even though they’ve only been doing it for 58 years–it’s just a total embarrassment. Every other issue goes into the garbage unread.

But being the committed U.S. Soccer fan I am, the May 17 issue’s fold-out cover had me intrigued … 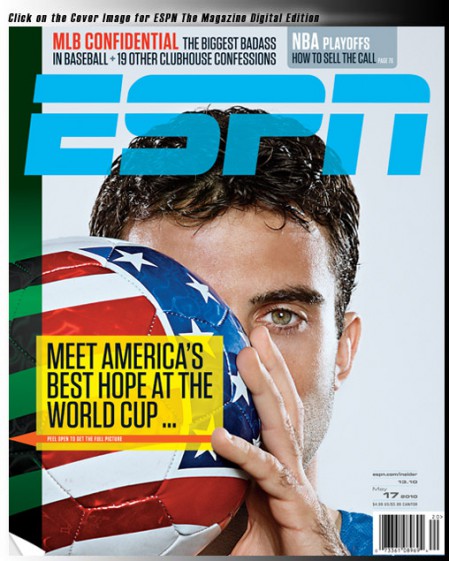 … especially since I didn’t recognize the player, and thought I’d be able to identify everybody on the Yanks’ 30-man preliminary roster. Then I unfolded the cover, and found that “America’s Best Hope at the World Cup” is … Giuseppe [string of expletives deleted] Rossi. Who’s from New Jersey but not even playing for the U.S. Haha! Good one, ESPN!

FALSE. Not a good one. Rossi is, without question, the single most hated man in American soccer right now, and is probably my least favorite athlete alive. I know I’m not supposed to wish injury on anyone, but I hope both his ACLs are eaten by lions. I hope he falls in a vat of acid and the blue of his Italy jersey leaches into his skin so he looks like a real-life Blueberry Johnson and he’s unable to take off his shirt in the presence of a woman without her laughing uncontrollably for as long as he lives. I hope Olive Garden asks him for an endorsement, and in the middle of filming his big commercial, he chokes on his Neverending Pasta Bowl and dies.

But even more than all that, I would hope that the people at ESPN would understand this, and would have enough sense not the stick this traitorous snot-nosed jackass on its cover as an extended middle finger to everyone who actually gives a crap about our soccer team. “Cancel my subscription” doesn’t even begin to cover the hate. I hope the editors responsible get confused about which plane is taking them to South Africa and accidentally board the one bound for the sun … and if they’ve convinced Rossi to skip the team flight and join them for old times’ sake, so much the better.