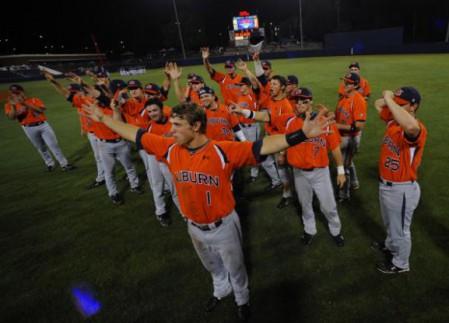 No doubt about it, last night was awesome. The first SEC West title in years. A home regional all but locked up*. An absolute pounding of a good starting pitcher for a good SEC team in front of a good crowd, all on the road.

But I don’t see any reason to stop here, do you? Don’t stop, Auburn. We’ve been talking all year about getting to Hoover and then about the division title and the Regional, but that doesn’t have to be everything.

Why not a sweep of Ole Miss at their place for Auburn’s first 20-win SEC season since (I think I read) ever?

Why not win the SEC tournament? No one is playing any better, even Florida or Carolina.

I’ll go ahead and say it: why not a trip to Omaha?

The season will be recorded as a smashing success even if you don’t accomplish nay of these things, Auburn. But it’s not quite time ot be satisfied yet, I don’t think.

Fortunately, knowing the way you’ve played this season, I don’t think you think that, either.

*Auburn is fourth at worst in the SEC pecking order, and probably third unless they have a bad SEC tourney and Vanderbilt has a great one. Everything I’ve seen suggests that equals “home regional.”

** I’m assuming one of the eight national seeds and the hosted Super Regional that goes along with it is out of reach. If someone know otherwise–if a sweep today and the SEC tourney title changes things–let me know.