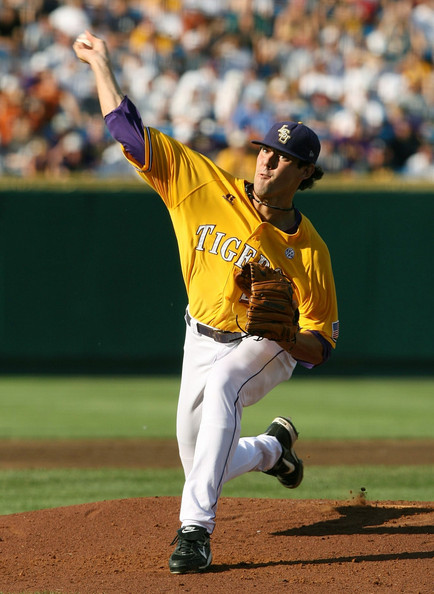 One final quickie blast of links to get you ready for the weekend:

Besuboru! This weekend’s series against LSU is far from do or die–it’s the home series later this month against Kentucky, Tennessee, and Mississippi St. that should send Auburn on its way to Hoover and the Regionals–but it’s a phenomenal opportunity to show the rest of the league that this program is a joke no longer. Kevin at PPL, as part of his always-terrific 5P’s preview:

(I)t should be an electric atmosphere. Coach Pawlowski and the players have been pounding the pavement to drum up support from Auburn students. Passing out flyers on the concourse, attending Frat Chapter meetings. The whole deal. LSU will travel well and Friday will be one of the best environments Auburn will have seen in a very longtime. This (hopefully) could be the signature win that CJP has been desperately searching for.

Kevin’s also got some thoughts up at Track’Em and is boldly predicting the atmosphere to help carry Auburn to a series win. I’ll settle for taking one of three off the defending national champions, myself. Bryan Matthews also has some baseball-related tidbits, including Pawlowski referring to the pitcher-by-committee approach the team took against South Alabama as starting “Johnny Wholestaff.”

Tubby. It’s always a treat whenever Dr. Saturday takes on anything Auburn-related at length, and his assessment of Tubby’s takeover at Texas Tech is no exception.

Trouble in Knoxville. So Nick Stephens has taken his leave of Tennessee after sliding to third on the Vol depth chart. On the one hand, it’s hard to say Derek Dooley and Co. have lost a lot by saying good-bye to a fifth-year senior who couldn’t beat out Jon Crompton in last year’s QB derby, but still, his options are now 1. a last-gasp first-year JUCO who no one else was seriously interested in 2. a rail-thin true freshman 3. Carnival du Converted Backup Wide Receiver Who Played Option Quarterback in High School. And there are no returning starters on the offensive line. And last year’s top two rushers are gone. I don’t know if it’s going to be the Vols’ worst season ever, especially adjusting for expectations, but it’s not going to be fun.

Elsewhere in the SEC, ‘Bama’s finally gotten the league teacher to crack down after telling on everyone for that whole “hey, everyone, schedule your bye week the week before you play them! Watch how mad they get!” thing. Some people just can’t take a joke. (Seriously, though … why has the SEC not been using a computer for this sort of thing?). And Steve Spurrier is apparently going to snap and bench Stephen Garcia at some point this season. (Please against Auburn, please against Auburn … ) And Ole Miss fullback E.J. Epperson has an unusual way with metaphors.

Etc. Stuart Mandel gets totally pwned … the Brits, just in case you haven’t figured it out already, are awesome. (Except for the soccer team. Until after the World Cup match, those guys can go suck a Florida-ful of lemons.)