Debate closed. Did anyone see Gene Chizik naming his new quarterback on a random Wednesday in post-spring April? I did not, but here we are:

“After thoroughly evaluating our quarterbacks during spring practice and over the last week, Cam has emerged as our post-spring No. 1 quarterback,” Chizik said. “Obviously, he will have a lot of work to do over the summer and during two-a-days to continue along this path. We fully expect our other quarterbacks to continue to work hard and compete with Cam during the off-season and into fall camp.”

Unless you put more stock in A-Day than was advisable, the only thing honestly surprising about the announcement is the timing. No one who took in a practice or spoke to anyone who had ever came away saying anyone other than Newton was The Man. And as for that timing, Newton can go through spring drills knowing it’s on his shoulders and receivers can know who’s going to be firing passes at them and the coaches can enter fall practice assigning reps accordingly. Assuming Newton doesn’t let the honor go to his head and take the summer off in celebration, there’s no downside here.

And best of all, Chizik won’t have to begin every single meeting by saying that no one’s the starting quarterback yet. Maybe that’s why he decided to go ahead and end the suspense?

Coleman. Please, Antonio, tell me you don’t have any regrets:

“I didn’t want to end my career on a 5-7 team. I think I earned respect from my teammates, coaches and the Auburn people, and you never lose that…If I had to do it again, I’d do the same thing…I think I had a better year my senior year than I did my junior year. I went back and helped get the program turned around.”

I’m not exaggerating when I say that makes me feel better. Still doesn’t excuse him getting passed over, though.

Number fun. Via GTP comes this interesting look at standard deviation yardage numbers in the 2009 SEC. Think of it as a distant, more advanced cousin to Phil Steele’s conference yardage margins. Results: 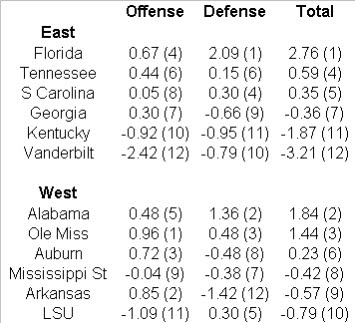 The major takeaway for Auburn fans: yup, that’s ol’ steady LSU and 2010 sleeper hottness Arkansas pulling up the rear at the bottom of the division. The Tigers will need to take major strides on defense, yes … but the Hogs will have to take even more major strides, and LSU will have to do the same on offense, just to pull even with Auburn yardage-wise. If we extrapolate from these numbers and expect the 2010 standings to more closely reflect down-to-down performance … you kind of have to expect Auburn to wind up as the runner-up in the West, don’t you?

Safeties first. (In the order of what position I’m worrying about most.) Andy Bitter puts together a post-spring profile of the Auburn secondary (with other positions to come) and (as expected?) his projected starting safeties are both coming off of major injuries and both missed out on contact entirely during the spring. The top reserve? Also missed all of last year with injury and struggled throughout the spring. I know this is a panic button I’ve pushed a lot in this space over the past several weeks, but read Bitter’s conclusion:

There are a lot of “ifs” in the secondary. Auburn will be solid IF Washington makes a smooth transition back to corner, IF Thorpe becomes less prone to giving up the deep ball, IF Etheridge, Savage and McNeil return close to pre-injury form, IF Means is for real.

That’s way too many for me to feel comfortable. Seeing it all written out in black-and-white, I have to think someone–Bates, Bell, supposedly game-ready corner Jonathon Mincy–is getting moved back to safety the day fall camp opens.

Prowlin’. The most interesting moment of Tiger Prowl II so far hasn’t had much to do with the Prowl itself; it’s been big-time safety recruit Erique Florence discussing why Auburn’s his clear leader over Alabama:

“It’s still Auburn No. 1 and Bama No. 2 and everybody else No. 3,” Florence said. “It’s the love I feel for Auburn that has them on the top. I feel like we’re all family. Not saying it’s not like that at Alabama but it’s much stronger at Auburn.

“Bama, it’s nice to be on top and all but you can’t go because your family or somebody else wants you to. You have to go where your heart is. Bama is a pretty nice school and has nice facilities. That’s got them No. 2 right now.”

I believe that is some deliciously faint praise ‘Bama’s been damned with there. Also worth checking out what Valley coach Mike McCombs had to tell to OA-News about the visit:

(W)hat impressed me as a coach and the kids who are being recruited, that staff, there’s a one-ness about them. They’re a bunch of comedians with the kids and that’s all necessary, but you can tell there’s a family within that staff and they all work so well together. That’s very different. When you see a group of them, all five or six of them coming in, just the way they exchange with one another and with the kids, that’s very uncommon and serves Auburn well. When you’re in a room with a group of those guys, it’s not hard to tell why they’ve done such a great job in such a short time on the recruiting trail.”

It would be so easy to believe all the family! family! family! chatter was nothing but orange-and-blue propaganda, but we just keep seeing evidence it’s not, don’t we? Over and over again. At some point, you have to accept the chemistry on this staff and between their players and recruits really is that special. (Or at least, you do if you’re me.)

BlAUgosphere. PPL is at it again:

That’s the highlight, but there’s reaction to Auburn’s 11-4 win over Samford and some lineup musings as well.

Auburntron lets us know there’s a Facebook movement afoot to bring an ice hockey team to Auburn. I say we skip the whole “having a team” part and just sell the jerseys. (Seriously, a team would be great, but finding the cash to build even a club-level ice rink isn’t going to be easy.)

JRS attended A-Day and came back with some solid pics of the Auburn Arena and thoughts on the QBs.