A little on the late side, I know. Sorry. Busy weekend in Real Life. 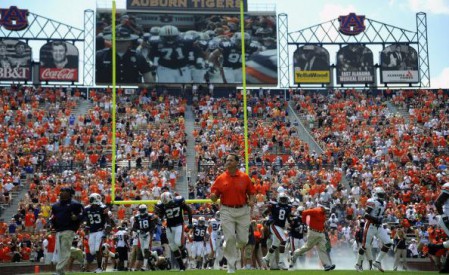 When not in attendance in person–where the sunshine and tailgating and autographs and Jordan-Hare make it a very different experience than watching on television–A-Day is kind of going to Taco Bell at 9:31 p.m. after skipping dinner. You’re so hungry, so in need of some kind of sustenance, that you can hardly contain yourself as you go through the drive-thru or watch the team run out of the tunnel. Holy crap yes I want some cinnamon twists! War Damn Eagle!

And then those first few bites are magical: Look at how sharp Neil Caudle looks! Oh man Fannin cut that outside like it was nothing! Carter’s going to be Antonio Coleman and then some! Check out the arm on Newton! Maybe it’s not real football or beef fit for human consumption, but it’s been so long since you’ve been able to indulge, it just doesn’t matter.

And then at some point, the magic wears off. Yeah, Caudle just threw a nice-looking touchdown pass, but it was to a walk-on receiver that will never see the field against SEC competition beating out a walk-on safety that will also never see the field. After hearing all spring about how the offense’s tempo is more ludicrous than ever, they’re walking to the line. What good is it to run Newton is the zone read when the defenders only have to get within the same zip code to have the play whistled dead? Etc.

And so just as there’s the dawning realization midway through your third taco that there’s a reason you paid 99 cents for the thing, there was the realization at some point in the second quarter that Auburn’s spring game just isn’t going to tell us the things we want to know. How good are our Tigers going to be? Who’s going to be the quarterback? Is the defense going to have its holes reasonably plugged? We have slightly more educated guesses than we had before the game kicked off, but they’re still very much guesses. You get what you pay for, whether it’s college football or late-night fast food.

So as Will and others have pointed out, drawing any kind of die-hard conclusions from Saturday is a waste of time. (And is a televised and/or attended A-Da ystill a thousand times better than typical Saturday? Ho yeah. I’ll take the greasiest item on the Bell menu over starvation every single time.) But we can, at least, take away a few observations, a few nuggets of education as we head into summer and fall camp. Here’s your humble Auburn Blogger’s:

But you don’t get a much smaller or less helpful sample size than eight passes in a spring game. And even if 3-of-8 isn’t impressive-looking, several of those incompletions were: the deep toss over the middle that Blake couldn’t quite haul in and the thread-the-needle throw to Wisner along the sideline were both very difficult passes that Newton just about pulled off. He didn’t have nearly as many stat-padders as Caudle or Trotter. And, of course, he couldn’t show off the running threat that’s the single biggest advantage he has over Caudle and Trotter. Assuming that he hits that easy TD pass 9 times out of 10 and then we just happened to see the one time, there’s no reason to be discouraged by Newton’s performance.

On the contrary, the biggest takeaway from the spring game QBs is to be encouraged by the position as a whole. Even if A-Day was a bad omen and Newton does wind up being mostly hype … if Caudle’s going to play like that, how much do we care? Again, it was just the spring game, but Caudle did look every bit the guy who knows the offense inside and out and frankly runs the zone read even more smoothly than Newton does. Do we have any evidence yet that Caudle can’t at least match Todd’s performance from a year ago, if not improve on it? The jury is further out on Trotter, given that he doesn’t have either Caudle’s time in the system or limited game experience, but he looked at least as good Saturday as Caudle did at A-Day 2009. Caudle probably would have done in a pinch last year, and Trotter appears like he’d do in a pinch this year. Even Moseley looked plenty comfortable.

The point of all this: maybe Newton’s still the savior that lets Auburn’s offense take the quantum leap forward we’re all hoping for, and maybe he’s not. But even if it’s the latter, Gus Malzahn is going to be able to find someone out of these four candidates who’ll be ready to make this offense a better unit than it was last year. The guy most likely to do that is still Cam Newton–three weeks of “he’s the guy” certainty isn’t undone in eight passes, is it?–but Malzahn is too good a coach and the returning QBs are too comfortable in this system not to see improvement at the quarterback position.

On the lines. Fannin and McCalebb never saw the gaping, yawning holes that Tate and McCalebb enjoyed in the 2009 spring game, and that’s probably for the best. Assuming Mike Berry (or at least Bart Eddins) returns to full health in the fall*, the offensive line is going to be fine. One of the biggest advantages it has over an opponent is the conditioning/tempo factor, and the pace of A-Day nullified that. If Brandon Mosley can learn to to run into his own quarterback, there’s no reason to worry here.

The defensive line, however, was a nonentity throughout the spring and with Antonio Coleman and Jake Ricks gone represents arguably the biggest hurdle between Auburn and defensive competence. So it was reassuring to see

1. Antoine Carter look completely healthy and generally like the guy we would have expected to look at in spring 2010 back in fall 2007
2. Nick Fairley make plays in the middle of the line we didn’t see much of last year
3. a Michael Goggans sighting: he finished with 1.5 TFLs on the day
4. generally limited running room for the backs.

*John Sullen’s an awesome story, but after watching Carter blow past him I’m afraid he’s not goign to be ready to be an SEC starter.Fortunately, he shouldn’t have to be.

Receivers own your face. The next time I hear some rival fan dismiss Trooper Taylor as a salesman in a backwards hat I’m going to burn the Internets down. Taylor’s been on the job for 14 months or so and during that tenure the wide receivers have gone from being the single weakest unit on the team to almost certainly its deepest and–after Saturday–quite possibly its best. I counted a single drop, Jay Wisner’s. Routes were sharp. Terrell Zachery was a monster. Quindarius Carr looked like a limo with all the gas we’d need. Edge blocking, particularly amongst the starters, was as solid as expected. (More on this in a moment.) Last year, the revamped offensive line and explosiveness of the running game was the most encouraging aspect of A-Day; this year, it’s watching Taylor’s charges largely dominate their opposite numbers even with Emory Blake only getting one good look.

But sure, right, all Taylor does is jump around and yell and schmooze recruits. It’s all just coincidence. Right.

Secondary. The flip side: does the receivers’ success mean the secondary is in trouble? Eh, don’t think so; Neiko Thorpe is hurt, the first-string safeties were Ikeem Means and Drew Cole, T’Sharvan Bell is still adjusting to corner. There’s still plenty of reason to worry about the safeties, but not because of anything we saw Saturday.

Quiet no longer. So, remember that “these guys have been too quiet” post from last week? I said it would probably look silly after A-Day and in most cases, it does. Thorpe is hurt; the defensive line looked fine; and Kodi Burns showed why he’s going to see plenty of the field even without the ball in his hands by blocking like his Auburn life depends on it. Which it probably does; I’m not expecting to see Burns make too many receptions this fall, but that he can operate the Wildcat and be a useful blocker/trick play option means that Malzahn can keep him on the field without too much of a drop-off and switch to the Wildcat without slowing down for a substitution. If he keeps blocking like he did Saturday, he’ll be fine.

Eric Smith didn’t have much of an impact, but the H-backs weren’t much involved, period, and at least he was running with the 1’s. Dontae Aycock was the one “silent” guy who it’s really time to worry about; he never did get carries with the first-team offense, he saw Davis Hooper gets as many bites of the apple with the backups, and frankly I didn’t think he showed enough burst to make me think he was going to get a promotion any time soon. As with every item here, it was just one day, but from where I was sitting I didn’t think it was a day that helped Aycock much.

So: in my mind, that’s too many improvements for Auburn not to move forward as expected. Will it be as far forward as we want? That we can’t say for certain yet, but A-Day was never going to give us that kind of specific answer, was it?