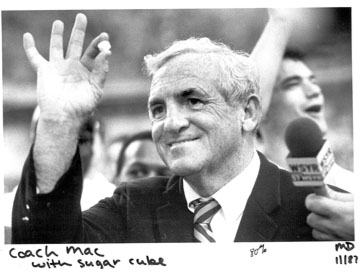 The Syracuse New Times took former Orangemen head coach Dick MacPherson’s’ return to Syracuse to serve as Grand Marshal for the town’s St. Patrick’s Day parade as another opportunity to revisit the single most traumatizing event in Orangemen football history: Pat Dye’s (understandable and unrepentant) decision to kick a field goal in the 1988 Sugar Bowl.

Curiously, MacPherson seems to think that going for the tie was, somehow, the beginning of the end for Dye:

Q: How about that 1988 Sugar Bowl game against Auburn? What were your thoughts when Auburn head coach Pat Dye decided to tie the game with a field goal as time expired?

A: The thing about it was that was the last year before they changed that rule. When you think of Auburn, and the mean, tough, nasty and real great hard-nosed football players, Pat Dye epitomized that and that’s the last guy you’d think would go for a tie in the ball game. It was a shock to me. But on the same token, if I had ever known that, there were a lot of other things I could have done. The thing that {Dye} always said was you had a fourth-and-6 that could have put us in the bag and he was right. But I think a lot of people in Syracuse were very unhappy. And it was the same old story: {Dye} didn’t last too long after that, but he was the king of the world going into it.