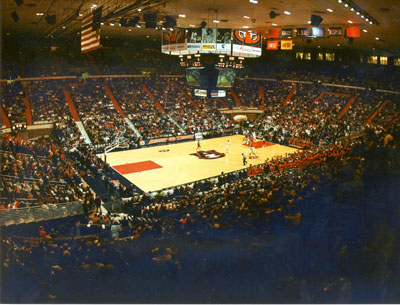 He sings the songs that remind him of the best times. And so the curtain has fallen–literally, if you remember The Curtain from the Ellis era–on Beard-Eaves Memorial Coliseum. Track ‘Em has a nice piece of nostalgia for the BEMC that’s well worth a read:

Today she stands only as a tribute to past glories.  Like so many of us in our twilight years, all she has left is her memories.  To mention just a few:  Both men’s and women’s SEC Basketball Championships, NCAA Wrestling Tournament, NIT games, Mengelt, Barkley, and Person, the King, the Boss, the Temps, the Commodores, and of course the most college wins (29) for a single season in the state of Alabama.  She has been placed on life support and it is only a matter of time before they pull the plug and put her down for good… just like was done to the Braves’ Fulton County Stadium.

No, to me she is NOT an Old Gray Lady, for in my mind’s eye she is still young, beautiful and exciting.  I understand the reasons given for leaving her, yet I can’t help but feel sad for her.  She has given her best years and is now cast aside for a younger, slimmer, and more attractive suitor.

The winningest Basketball coach in Auburn history, Joe Ciampi, said “This place is special.  With all the memories in there, I haven’t even been able to the new arena, and I don’t know when I’ll walk into it”.  Well coach, I know what you mean.

Me personally, I can’t get into the Auburn Arena fast enough. But that doesn’t mean we can’t share some of the good times at the Beav–including the first time Auburn beat Kentucky there, as Jeremy (and some classic photos has documented). There’s also some good stuff in the Track ‘Em comments, and as for me, the first thing I’ll think of were the women’s games in the 80s.

My grandparents, God bless them, had been big Ciampi supporters from the get-go and got our entire family season tickets. Attendance rarely even broke four digits in those days, so as Vickie Orr and C.J. Jones and one of the Bolton sisters ran some hapless team clean off the floor, my brother and I would climb to the very top of the coliseum and do laps around the back row, timed with a calculator watch. (Truth!) That’s the way I’d like to remember the building: colossal, stately, but fun, ours, and home to a team you knew would win the game before you ever stepped over the threshold.

Notes from the Beat. Lots of non-hoops related stuff to get through after last weekend, like …

Baseball sweeps. Cole Nelson continued to establish himself as the team’s top pitcher and Hunter Morris snapped out of his early-season funk in a big way as Auburn took all three games from visiting Miami OF OHIO (they hate that), 14-9, 13-5, and 5-4. PPL’s got your recaps here and here.

You may have noticed that to date, Auburn has been the baseball equivalent of your church league softball team: lots of runs scored, not so much with the lockdown pitching (Nelson excepted). At least they’re getting awards for it.

Krootin’. Charles Goldberg has a useful rundown of last weekend’s developments, the two big headlines from which are:

— Danny Woodson Jr., member of Rivals’ watch-list and the son of a former Tide quarterback, says “I think Auburn is where I’m going”

— RB Demetrius Hart says his finalists are Auburn and Florida … and that he’ll decide before summer.

Softball wins. The Tigers won a 6-3 nine-inning barnburner over 12-4 Valparaiso Sunday, improving to 13-6 overall and capping a 4-0 weekend at the inaugural War Eagle Classic.

Friends in high places. I’m sure you’ve seen both this and this by now, probably in many different places, so all I’ll say is this: hot damn it’s fun being part of a rivalry nasty enough to make people with this much power this schoolyard petty.

Ain’t over ’til it’s over. This is a week old by now, but just for the record, we now have an official statement that Tyrik Rollison’s Auburn career might not be completely kaput after all:

Trooper Taylor said Tuesday during an interview with The Star that redshirt freshman QB Tyrik Rollison has not made a final decision on whether or not to transfer to Sam Houston State, as has been widely reported …

Though Taylor said Rollison has not yet made up his mind, he did say that Rollison’s status for spring football remains uncertain. It will continue to be unclear until Rollison reaches a decision.

We’ll also of course be listening to Taylor, whose well of interesting things to say never seems to run dry. If you missed his interviews last week with Jay Tate and Luke Brietzke, read ’em now.

Speaking of interviews … Antonio Coleman talks about his leap to the NFL with Southernpigskin.com.  “Tweener” my orange-and-blue ass.

Etc. Harry Adams might be gone from the football team, but he’s hardly forgotten on the track team … War Eagle Atlanta reminds us of how monumentally short-sighted the decision to tun down the Chick-Fil-A opener against UCLA was … I am not one of the “there’s too many bowls!” gripemongers–the more kids get to have their season of hard work rewarded with a week of fun, the better–but geez, if there’s more bowls than there are teams to fill them, we really will have reached some kind of a tipping point.