Sorry, I have to show this to you. 1. The difference between one slot and the next one in Rivals’ team rankings is, to quote Men in Black, precisely [Richard] 2. Even I’ll have to be pleasantly surprised if the situation pictured below holds through the end of Signing Day 3. I don’t care, I enjoyed this: 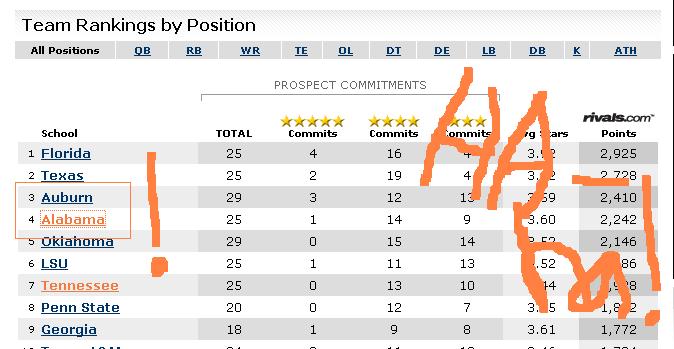 That’s as of last night. Like I said, it may not last–Shon Coleman could swing things singlehandedly–and it doesn’t matter if it does or not, but when you remember what so, so many Tide fans said would happen when Gene Chizik went out on the recruiting trail … yeah, it’s still pretty sweet.

So: Signing Day. It’s tomorrow. This post will get you as up-to-date as I can get you.

But first: an announcement. My second annual Signing Day Liveblog Extravaganza will be right here at TWER tomorrow, 9 a.m. (Central) sharp. It’ll be just like last year, except instead of a day of anxious, cautious optimism punctuated by the joy of signing one surprise WR recruit, it should be a day of celebration start to finish. Whoever Auburn might miss out on between now and then shouldn’t even begin to detract from who Chizik and Co. haven’t missed on. At this point, it really is all gravy.

And hey, maybe there won’t be much missing out anyways. So after the panic in some Auburn quarters over Shon Coleman’s flirtation with Alabama last week, things are looking up again: 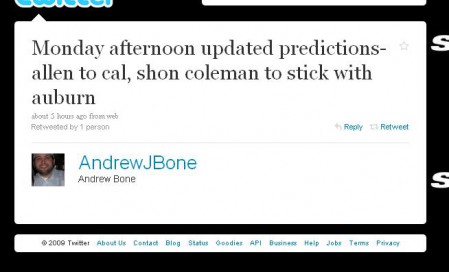 Courtesy of RBR, that’s BamaMag‘s/T-Town News’s Andrew Bone predicting Coleman to Auburn there–not the sort of guy who’d have a whole lot of motivation to predict the Tide to whiff, other than for the sake of being right. Here’s Ole Miss’s Scout writer at the Bama Beat:

Miami could be too far from home in the end. Alabama has too much depth on the offensive line. Auburn there are no negatives. Ole Miss is close to home but there are some issues behind the scenes. Looks like he could be leaning back towards Auburn now. I would put them as the front runner!

So that’s both the Tide’s and the Rebels’ beat guys predicting Coleman to Auburn. That, folks, is a good sign, and that the Tiders seem to be feeling better about themselves with James Stone is a positive as well. We’re certainly not out of the woods yet with Coleman–I’m guessing we won’t know for sure until Wednesday–but it’s time to go back to feeling some genuine optimism here.

And elsewhere? Well, it’s come to the point that Auburn is about the only place you’ll find any optimism regarding Marcus Lattimore and Corey Lemonier–4 out of 5 Rivals gurus expect both of them to remain in-state, and ESPN echoes those sentiments. Meanwhile, an awful lot of Auburn fans are still feeling bullish on the Tigers’ chances.  Guess we’ll see who’s right tomorrow.

Lattimore broke his media silence yesterday for an interview with Sporting News … and give him credit, if there’s anything to read between the lines one way or the other, I’m not sure I’m seeing it. Maybe that he talks a little more about Spurrier than Chizik isn’t what we want, but that’s probably just paranoia on my part.

Besides, it’s not like Lattimore doesn’t demonstrate perfectly why he’ll be taking a big leap of faith signing up with Spurrier and crew:

“If I go to South Carolina, I’d be a big-time receiver out of the backfield and I’d also run the ball a lot,” Lattimore said. “I’m excited about that because I love catching the ball. I know it’s going to be a challenge, but I’ve seen when coach Spurrier was at Florida, when he had a great tailback like Fred Taylor and Errict Rhett and how he used them. I’ve seen tape on how he used them.”

OK, first of all: Taylor? Errict Rhett? Those guys didn’t just play for Spurrier at his previous school, they played for his previous school two decades back now. (Taylor graduated in ’97.) Maybe the reason he hasn’t had any great tailbacks since then isn’t just the tailbacks? And that’s point No. 2 here: if Spurrier’s telling Lattimore that he’s been using his current tailbacks this way but that he’d use Lattimore that way because he’s so much better … uh ,what does that say about how he feels about the guys on his current team?

Obviously there’s a thousand-and-one factors that go into a recruit’s decision, oodles that favor Carolina here, and whatever choice Lattimore makes we’ll respect it. But it’s just hard for me to see “Spurrier’s track record with tailbacks” as a legitimate reason to opt for the ‘Cocks.

Here’s some numbers for you to work, Luginbill. So Jay Tate caught up with uberguru Tom Luginbill for some comments on the Dyer v. Lattimore debate–as if at a juncture this early you could really pick one or the other–and that was interesting ,but what’s with this?

On possible overcrowding in the Tigers’ 2010 class: “They’re a team that’s going to have to play a bit of a numbers game because of the SEC rule to sign only 28. They’re going to have to eventually place some kids who are not going to make it or grayshirt some kids who will count toward the next class and work the numbers a little.”

Uh … Mr. Luginbill … you’re the recruiting expert. And I’m the silly blogger. So maybe I’m way off about this. But you remember when Auburn signed those five guys last December? When they signed their LOIs and enrolled, and Auburn counted them towards their 2009 class instead of this year’s? Yeah, those guys aren’t going to count towards the 2010 limit of 28, are they? Why would they? Their LOIs are in, they’re in school, they’re officially back-counted with the NCAA … in what way are they part of the class of 2010 aside from Rivals/Scout organizational categories? And if those five players don’t count towards the 28-player limit, then Auburn’s only at 24 and can sign up to 4 more recruits. So, yeah: I think Auburn’s numbers are already worked.

Trouble in paradise? They’ll be perfectly fine, of course, but there’s actually a little February turbulence across the state for the first time since the Coachbot arrived. Five-star athlete Keenan Allen has decommitted and appears ticketed to Cal (as Bone reports above), which accounts for the rankings flip-flop; the only reason Coleman even got any attention from the Tide in the first place was because Stone went to a Tide lock to a potential Volunteer; there’s scattered talk that Arie Kouandjio could wind up at USC (though I doubt it); and instead of their usual close with the Dre Kirkpatricks of the world, the Tide’s two most recent commitments were a JUCO fallback (albeit a good one in Dequan Menzie) and one poached from … Memphis. Feel free to remind Tide fans of that last one the next time Auburn takes a midsummer flier on a kid ticketed to Troy or Southern Miss.

As I said at the top of this post, declaring either Auburn’s or Alabama’s class definitively better than the other is splitting some stupid, stupid hairs … but if Coleman does indeed stick and the Tide misses on either one of the other two linemen, all while Auburn finishes with either Lattimore or Lemonier, there’s going to be at least a little bit of squirming on their side. Yay for that.

Also: Jay goes over the remaining targets at Track ‘Em … and via TET, some lavish praise for Chizik and Co. from the Rivals folks.

And so … final projections? Realistic best-case scenario, you figure, is that Auburn keeps Coleman, picks up two of the Lattimore/Lemonier/Byran Jones trio, either holds onto D.J. Howard or adds someone else (Pat Swilling Jr.’s gotten name-checked a lot lately) who might be a safety somewhere down the line … and pulls a Deangelo Benton-esque Signing Day stunner. Realistic worst-case? Coleman flees to ‘Bama, Howard bolts (as is more-or-less expected now, sadly), and Auburn goes 0-for-3 on their big targets without any positive surprises.

The guess here should aim low, but Chizik and Co. have done nothing but surprise people, over and over again, ever since they showed up on the Plains. So what’s one more shocker? I’ll say Lattimore stays in SC … but Lemonier and Jones come to Auburn while both Coleman and Howard stay with the Tigers. What the hell.