The wrath of my trivial pursuits knows no end.

A few weeks back, I called Pat Forde to task for claiming that Shug Jordan’s simultaneous tenure as Auburn’s basketball coach and assistant football coach in the 1930s was an early and clear sign of Auburn’s institutional indifference toward the sport, the insinuation being that our legendary football coach couldn’t possibly know a damn thing about basketball.

(What does it say about Georgia? Because he was also their head basketball coach while a football assistant and broke the Bulldog’s record for wins in a single season in 1948.)

As I said before, Forde was apparently unaware that Shug, described in 1932 as “the greatest forward to don an Auburn uniform,” was a hell of a basketball player and scored more points in the 1929-30 basketball season (111) than any other player in the then Southern Conference.

He was also probably unaware — I was only just reminded of it myself — that Auburn Plainsman editor David Housel chose to headline his Feb. 1968 story about Shug’s multi-sport exploits: “Maravich of 1929 was Ralph ‘Lefty’ Jordan.”

The piece is full of anecdotal crushers to at least that aspect (of that aspect) of Forde’s argument on the current state of Auburn basketball; to wit, Housel’s quote from legendary Kentucky basketball coach (and Shug’s pal; he was the only Southeastern Conference coach — basketball or football — to congratulate him on Auburn’s national championship) Adolph Rupp:

(“When I took over as head football coach and gave up basketball, Coach Rupp wrote me and told me it was the worst mistake I’d ever make.”)

But there are also a few stories that clue us in on where Six Shooter Shug might stand in the Atmosphere vs. Capacity debate regarding the size of the new arena intended to change Forde’s and others’ perceptions: 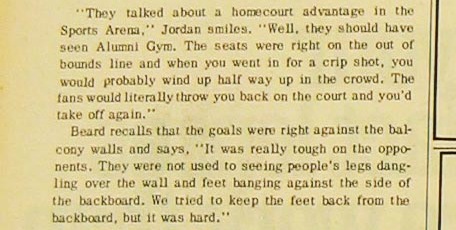 So next season, let’s give the athletic department and its architects the benefit of the doubt, head out to Mamadou N’Diaye Memorial Thunderdome*, and dangle those legs… for Lefty, and for a new era of institutional responsiveness in Auburn basketball. See you there, Pat.