When I called, she was at an outdoors party at the W Hotel about to interview Terrell Owens for ESPN The Magazine, which actually wasn’t as big of a deal for her as it was that time with Kobe Bryant, or ooooh, actually that one time with Ron Artest, because she’s from Houston and was “a huge fan of his when he played for the Rockets.”

But still — Venus Williams, Lil’ Kim, E! News, Mike Ditka, Pete Wentz spinning records, Vikings and Jets players everywhere … no, it wasn’t a good time to talk, even if it was just T.O.

She called back as her cab pulled up to the hotel.

“You don’t take credit cards? Umm, OK … here … you can keep the change.”  She handed the driver some bills. One was slightly torn. He handed it back and mumbled.

Answering interview questions on her cell phone while confidently haggling with a Miami cabby (he took the money — maybe she had a familiar, ESPN.com kind of face) in between A-list pre-parties on the Thursday night before the Super Bowl: If she thinks it’s all a bit surreal, or at least thinks that her career thus far has been maybe just a little meteoric, 22-year-old Lindsay McCormick isn’t letting on.

“I know what you mean,” she says stepping into the elevator, “but everyone tells me that once you break into this industry everything just falls into place and happens for you.”

At least they do for beautiful, blond, sports-obsessed coed workaholics — she kept Sky Bar to a minimum and finished her coursework in three and a half years — with an enviable knack for being in the right place at the right time.

In 2008, that was on the sidelines at the Auburn-LSU game, which just happened to be that week’s ESPN Game Day location.

“I worked for Eagle Eye News as a sideline reporter and a post-game interviewer … and [ESPN] saw me working and I met the producers and we joked around and I said, ‘You don’t happen to have an internship?’”

They had an internship.

“I got my internship because of that and afterward, somehow my college demo reel was being passed around ESPN and I got called in for a screening test and that led to where I am today.”

Where McCormick is today is only nine months removed from graduating from Auburn with a degree in communications — her student e-mail account hasn’t even been deleted yet — an accomplishment that, along with a little help from above, she considers to be the secret to her young success.

McCormick visited the Plains as a high school senior in 2005 with what her Dad called a 1 percent chance of actually enrolling that had nothing to do with grades and everything to do with his wanting to keep his daughter in Texas, probably at TCU.

“Coming from Houston … the sense of community [in Auburn] was completely different from I was used to and I liked it. I liked that the town centered around the university and that it had old Southern, traditional values,” she says. “When we came we were staying at the Hotel and Conference Center and it was Sunday and we heard these church bells ringing and all these college kids were going to church, and we looked at each other and I said, ‘Dad, I think this is where God wants me to be.’ And he said, ‘I do, too.’”

If she needed confirmation — right place, right time — she got it pretty quick.

The first person she met as an incoming freshman?

The equally precocious Jerraud Powers, starting rookie cornerback for the Indianapolis Colts, who was in Miami last week for a little gig of his own.

“Jerraud and I were in the same [Camp War Eagle] session and all of our events got canceled because of tornadoes,” she says, laughing, as she walks into her hotel room. “We spent the majority of Camp War Eagle in the Foy basement. We’re really good friends. Yeah, I was actually supposed to see him last night before the game but he couldn’t make it to South Beach.”

Of course, they will probably have plenty of years to catch up on the sidelines.

In addition to writing for ESPN The Magazine‘s Page 2 section, wunderkind McCormick hosts ESPN.com’s “Streak for the Cash” and “College Pick’em” video segments, and it’s quickly obvious from watching her perky YouTube-able clip reel that she has the potential for much more.

“The industry, I think, is getting more competitive and I think a lot of women think you can just be a pretty face and get on TV, but in the sports world, it’s not enough,” McCormick says. “You have to know sports. You have to be able to write, do radio, broadcasting, the complete package.” 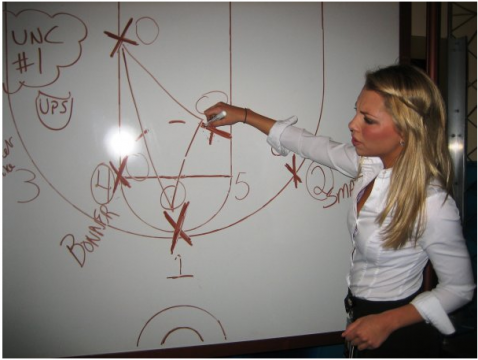 And as a female sports reporter in the age of Erin Andrews (who— unlike work pals Joe Schad and Scott Van Pelt— she has technically yet to meet), you also have to be able to plug the peepholes that unfortunately come with the territory. Friday marks the one-year anniversary that illicit videos taken of Andrews undressing in a hotel room were posted online by a stalker; a sentencing memorandum obtained this week by “The Smoking Gun” reveals that the same man ran background checks on other female sports reporters and TV personalities in order to obtain their addresses, phone numbers and other personal information.

As far as all that goes, McCormick is simply trying to keep her game face on.

“The broadcasting industry is part of entertainment industry and when your viewership is mainly males, you know what you’re getting into and you have to take certain precautions,” she says. “But I was in a PR class my senior year and we had to make a [personal] Web site and our teacher made us put our phone numbers and stuff on there and I had no idea I was going to be with ESPN back then and would have to take all these precautions. So I had all my personal information in there. I think my phone number is still roaming around so we’re going to have to do a little bit of damage control with that.”

But in the meantime, there’s another party to get to (something about Nick Lachey’s birthday) and more interviews to snag (she got Eli to dish on Peyton).

“Ochocinco is hosting it,” she says. “I don’t know, I’m sure that’s going to get a little out of hand.”