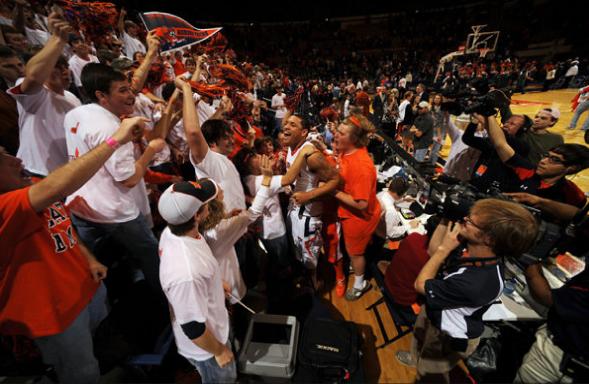 For a few days–until the Tigers’ trip to Arkansas Saturday, at least–we should probably put the Jeff Lebo stay-or-go debate on hold. We should probably ignore the fact Auburn’s two SEC wins have come by a combined five points and their five losses by a combined 58. We shouldn’t think about how slim Auburn’s NIT chances would have been if they’d failed last Saturday, or how slim they’ll be if they do drop any of their upcoming winnable match-ups. We shouldn’t compare them unfavorably to the Auburn women.

Because I don’t know about you, but I’m tired of all that. They won. They beat ‘Bama. For a few days, to hell with all that.

Let’s note instead that Auburn’s previously porous defense rose up and held the Tide to 57 points total and none in the final 2:22. Let’s point out that Auburn’s sputtering offense found a way to score five points in that span against one of the SEC’s best defenses to overturn a four-point deficit. Instead of bemoaning the fact that Dewayne Reed missed one of two free throws with a chance to give Auburn the lead with 12 seconds remaining, let’s celebrate that he got the critical one to tie (remember, in the same situation last spring against Baylor, he whiffed on both). We could continue worrying that as soon as one Tiger gets hot another seems to cool off, but instead let’s praise Tay Waller–and his 20-point, 8-of-12 FG, 4-steal performance–for picking up the slack left by Frankie Sullivan’s slump. Rather than mourn the 2-5 SEC start, let’s dwell on the fact that last year’s team posted the exact mark through seven games–and against a slate that hadn’t included four teams in the current AP top 25*.

For a while now, we’ve been expecting the worst from this team. Let’s spend this week with that disbelief suspended. Let’s let ourselves hope a bit. This week, at least, they’ve earned that.

Other notes from the box score:

— Oh, and please, don’t turn it over when you get there. I don’t know if I ever remember looking at a box score where the winning team posted a 4-to-15 assist-to-turnover ratio. (4-to-15! Good heavens.) Your principal culprit was … well, I want this be a positive post. But that guy, you know … Schmeschmayne Schmeed … yeah, 1 assist and 6 turnovers.

— On the bright side, the Auburn defense forced a whopping 19 turnovers (in one of the slower-paced games the Tigers have played this year) and hounded the Tide into 26.7 percent shooting from 3. Result: .84 points allowed per-possession, Auburn’s best mark in league play by a mile-and-a-half, even given the Tide’s difficulties on the offensive end. If Auburn really is going to make this more than a well-timed, emotional one-off, they’ve got to build on this defensive effort.

— More than one of us noted during the Ole Miss game that Ty Armstrong appeared to be doing more with his limited minutes than Johnnie Lett was. Apparently Lebo noticed, too; Lett started but played only 8 minutes while Armstrong got 13 off the bench.

Belief’s never really going to be a problem with Nell Fortner’s teams, is it?

Over the past couple of weeks the Auburn women had already enjoyed and/or suffered close wins, close losses, and big losses against the upper echelon of the SEC  … so you knew that sooner rather than later they’d find a way to fill in the fourth part of that equation and post a big win. Sure enough: up 5 with 7 minutes left, the Tigers held a team that was 18-0 not too long ago to zero field goals until a meaningless layup at the buzzer. On her own bobblehead day, the Dawgs had the options of going inside against Keke Carrier (who finished with four blocks) or firing away from outside … and the visitors chose the path of less resistance, taking just shy of half (24/49) of their field goals from deep and hitting all of five. And Carrier said: HA-ha!

Auburn is still just 3-6 in the SEC … but two of those wins are against ranked teams (LSU and the Lady Dawgs, who came in ranked No. 9), one of those losses came on the road in overtime (at Florida) and one came on a missed last second shot (vs. Vandy). Meaning that with all of one senior (Carrier) in the rotation, Fortner’s Tigers could easily be over .500 or a game back of it in one of the toughest leagues in the country.

— Auburn still isn’t shooting especially well (4-of-17 from 3, 42 percent overall),  but it doesn’t matter much when you rebound the way they did against Georgia, where they pulled in 17 of their own 34 misses. No, it’s not too tough to win when you miss a shot and get the ball back half the time anyway. (Jordan Greenleaf had six of those 17.) Between their work on the glass and having committed five fewer turnovers than the Lady Dawgs, Auburn put up 10 more shots and three more FTs.

— Morgan Toles racked up 10 assists (twice her number of TOs) while adding four rebounds and two steals. And she’s a freshman. Point guard. Didn’t take too long to find the next Whitney Boddie, did it?

BONUS breaking news: the new arena is going to blow your mind. Fields of Donahue has pictures of a recent tour: 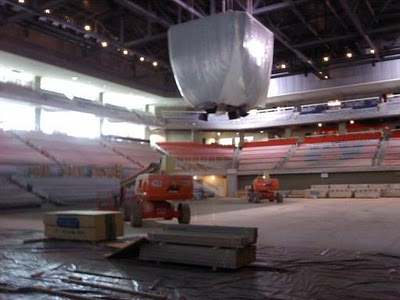 This thing is going to be so damn sweet I’m getting cavities just thinking about it.

But here’s a question that’s popped up in the WBE comments recently: what are we going to call it? “Auburn Arena” is the working title, of course, but is that really snazzy enough a name to stick permanently? And assuming it doesn’t, do we choose a former Auburn hoops great to honor? Who? Do we go with an Auburn administrator or trustee? Auction the name off to the highest bidder? (“Colonial Bank Center” has to be the clubhouse leader, riiiiiight?)

Your suggestions go in the comments, folks. We’ll figure this out together.

*Seriously, though, don’t get carried away with this. Scoring margin is always a better predictor than straight win-loss, and last year Auburn’s first two league wins had come by a combined 36 points, the losses by 50. But hey, you never know.