In which a recruit’s name is plugged into Google and the bits of information that trickle out–guru ratings, newspaper profiles, YouTube highlights, all that stuff–are synthesized in the hopes of getting a clearer picture of the player we’ll see at Auburn next fall. Previously: Jessel Curry, Craig Sanders, Roszell Gayden, and Brandon Mosley. 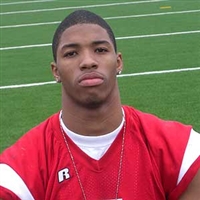 Demetruce McNeal is a rare thing–in fact, that rarest of things–in this 2010 class: a true safety. McNeal was a a safety in high school, will play safety at Auburn, will be a safety at heart even after he graduates forever and ever amen. The class wrapped up at 32 members strong, and McNeal’s the only one who you’d say that about.

So it’ll be a huge help if McNeal can provide the same kind of immediate steadiness at safety his sort-of predecessor Daren Bates offered in the class of 2009. Even though McNeal’s commitment last July didn’t move the proverbial needle, his role as the head of this class of safeties makes him one of the more interesting–and possibly more important–recruits Chizik and Co. snagged last year.

HIGH SCHOOL: Averaged nine tackles per game as a senior, had four forced fumbles and returned a fumble for a TD … On offense, scored four touchdowns as a senior … Named to the PrepStar All-American team … Ranked as the No. 63 player in Georgia by SuperPrep … Selected to the 2009 4A All-State Team by the Georgia Sports Writers Association … Had 104 tackles as a senior … Two-time selection to the Region 5-AAAA First Team.

Nothing that jumps off the page, I guess, but between the 104 tackles and the four forced fumbles, the picture you want to see from your proto-safety recruit–a steady defensive presence who can occasionally lay the wood–is there.

Also worth noting that McNeal was one of two graduates of Banneker High in this Auburn class, with Shaun Kitchens the other.

RECRUITNIK HOO-HA: McNeal never was much of a favorite of the gurus. Rivals assigned him a ho-hum grade of 5.6 and three stars, along with a ranking as the No. 57 safety. He barely made their top-75 for Georgia, falling to No. 70. ESPN is even less enthusiastic, giving him a below-average grade of 75 and calling him their No. 94 safety; only six other members of Auburn’s 2010 class received a grade that low, and three of those committed on Signing Day. ESPN does say this, however:

McNeal is a cross between an outside linebacker and a free safety. His size makes him more of a safety and plays the perimeter exceptionally well. A tall and lanky football player that plays with intensity and gives great effort. Uses his hands to defeat tight ends and backs that try to hook him or knock him into the second level … Must be careful to not get outflanked by jumping to the inside; doesn’t have the recovery speed to get back to the outside. Quicker than fast (I’m assuming they mean “more quick than fast”–ed.) and overall speed makes him more of a strong than free safety. Very good outside blitzer that comes hard and has a nose for the football … Good short zone pass defender due to awareness and long arms to deflect the football when thrown to the hook and curl zones. Athletic and instinctive enough to play the slot receiver, tight end, or back out of the backfield man to man … He can be a very solid all around defensive player with some added bulk and strength. This will also make him a more consistent and confident tackler.

So you can read between the lines at why ESPN doesn’t really think that much of him: his size and his speed. I generally respect the gurus, but this is stereotypical myopia on their part; when they miss, it’s often because they look past qualities like intensity, effort, instincts, and all-around skills to raw athleticism. I’m betting that’s the case here.

Scout may be making the same bet: they only give him three stars, but they do rank him the No. 31 safety and offer this evaluation:

McNeal plays the game hard, sacrifices his body, loves contact, and will play anywhere coaches ask him to play. Needs to work on his coverage skills, reading the quarterback, and taking the proper angles, but he closes well on the ball, he is a big tackler, and he will fly around the field trying to make a play. He does not have the elite speed, but he is fast enough and playing offense helps him on defense. Should impact early on special teams.

Teams are going to regret not going after him because he’ll be an excellent college player. Auburn offered him as a sophomore and locked him up. He had an outstanding senior season.

Word. He’s right that not many teams came after him, though; South Carolina and West Virginia were his only noteworthy offers.

Us usual there’s also video at the official Auburn site and some highlights from McNeal’s sophomore year. There’s also a story reporting on the game that featured the punt return-for-TD. That’s enough, right?

Jay Tate, again, on the lack of stats for McNeal:

McNeal isn’t a numbers guy, which isn’t unusual for a safety playing in Atlanta’s public-school leagues. The Wing-T still thrives there. That helps explain why Auburn would take a chance on someone with one career interception.

On the other side of the ball, Gosa believes McNeal, this year’s winner of the Carlos Rogers Award, has the potential to make an impact right away.

“DeMetruce is arguably the best athlete I have ever coached and will have an opportunity to start as a freshman.” Because of McNeal’s determination, passion and leadership qualities, Gosa sees McNeal playing on Sundays also.

Uh, what does Shaun Kitchens think about that “best athlete I have ever coached” stuff? Damn, that’s an endorsement. And yes, the “Carlos Rogers” in question here is that Carlos Rogers; it’s the award given to the state’s best defensive back (I think) by the Atlanta Touchdown Club. Yes, I will take that as an omen.

While we’re talking about Georgia honors, one of the players McNeal narrowly beat out for All-State? His own brother Demarco, who was on the Auburn radar for a while but eventually signed with I-AA Tennessee St.

Tommy Thigpen his own self has said “you can’t count out” McNeal (or fellow future safety Ryan Smith) from a starting job this fall. Thigpen’s probably just being nice, but it’s still better for McNeal’s prospects, I’d think, than an admission he was planning to hand him a redshirt.

McNeal first committed as part of an awesome recruiting weekend that also resulted in D.J. Howard’s commitment and Aubrey Phillips’s decision to come to Auburn. It’s a little less awesome now than it was then. But having energetic players aboard like McNeal was still a big, big help, as Jay Tate’s McNeal-centric story from January told us:

Demetruce McNeal remembers the days when committing to Auburn was a leap of faith.

The safety from suburban Atlanta made his decision six months ago because of pre-existing relationships with assistant coaches Trooper Taylor and Tommy Thigpen.

They promised a clear shot at playing time, a program expected to improve during McNeal’s stay, a chance to be part of the most touted recruiting class in the school’s history.

McNeal believed the first two promises when he committed in July.

The third? He didn’t think much about it.

“I just figured it was hype,” McNeal said. “All these coaches say stuff about how they’ll be the best. Now (I realize) they were serious about that. They’ve been picking up four-star and five-star guys all the time, it seems like. I love calling these (new commitments) and saying: ‘Welcome to the team.’ I was one of the first guys at this party.”

There’s more on the DeMarco situation there, and Tate has some outtakes from his conversation with Demetruce here. Money quote:

On his lack of high-school stats, which includes one career interception: “I know! People won’t throw at me. I had two passes thrown my way all year. They didn’t catch either one, of course, but teams just don’t throw much anymore. You see a lot of Wing-T in Atlanta. That makes me play up more, give that run support. Some (college) teams saw what I was doing and wanted me to play linebacker, but that’s not me. I’m a safety. I want to have that chance to play pass defense. I want to be a complete safety.”

Do you know what I like hearing out of Auburn’s safety recruits? That the position they want to play is safety. That’s nice.

Lastly: as far as Google can tell me, Demetruce is like Tigger: he’s the only one. There are no other Demetruces.

WHAT CONCLUSIONS WE CAN DRAW, IF ANY: Looking at McNeal, I keep coming back to one thing: Auburn had chances to sign other safeties. Four-star, All-American head case Ahmad Dixon was interested. They could have kept D.J. Howard. There were plenty of JUCOs, plenty of other seniors out there Chizik and Co. could have taken a run at.

They never really did. They brought Ryan Smith aboard at the last minute, sure, but Smith was a high school quarterback who’ll still need at least a little seasoning. After last year’s injury parade it became clear Auburn had to bring in at least one out-and-out safety … and McNeal was the guy they settled on.

That’s enough for me. McNeal’s lack of top-end athleticism means he might–might–not ever be a superstar, but all the tools appear to be here for him to become a rock-solid safety and a big part of Auburn’s future defenses.